Visiology is the Russian the IT company, the developer software for the analysis and data visualizations. The company offers not only software products of own development, but also service in their completion and support. Presence of qualified specialists in data analysis and development SOFTWARE, examination in the field of data visualization and scientific potential allow to implement large-scale projects together with the system integrator"Polymedia", "The first Beat", "Croc". Visiology develops products and solutions for the Russian and foreign markets.

Main product of the company – the analytical Visiology platform which helps business and the state to work with data, to control key indicators, to solve problems of forecasting and planning. Among features there are platforms for May, 2020: the virtual analyst of ViTalk, own In-Memory technology of data processing ViQube, the system of collecting of the reporting through web forms both evident and clear visualization on any devices — from smartphones to videowalls.

On the basis of the Visiology platform analytical solutions for industries, such as construction, pharmaceutics, distribution and many others and also are developed for different spheres of public administration.

For foreign users the company offers the Polywall software product – the high-class software solution for control of videowalls and information displays in the situational centers, dispatching offices and command centers.

For May, 2020 the company gained trust more than 100 partners worldwide who implemented more than 400 projects on the basis of Polywall in Russia, the CIS, Europe, Asia, Latin America, Africa, Australia and North America.

IT- the company "Croc" announced on March 11, 2020 that it signed the partnership agreement with Visiology, the developer of the platform of the same name. It will allow to expand Croc with a portfolio of solutions on to import substitution in a segment business analysts and corporate management, and the vendor will be able to take part in large-scale and complex projects in all territory Russia. In more detail here.

As of 2016 Visiology specialized in solutions for visualization and data analysis and also software development for interactive displays and videowalls. Among features there are companies:

Main product which the company offers the Russian users – the analytical platform of the same name which advantages are visualization, support of technologies of data analysis (including Big Data and Predictive Analytics) and flexibility of setup. Visiology also develops on the basis of the platform analytical solutions for the different industries, such as construction, pharmaceutics, distribution and many others.

For foreign users the company offers the following products:

Opening of office in Innopolis

On December 9, 2016 in the administrative business center of A.S. Popov (in the territory of the Innopolis Special economic zone) with the assistance of the mayor of the IT city Ruslan Shagaleev the opening ceremony of office of the company of Viziolodzhi Tekhnologiya was held.

The CEO of Polymedia company and the founder of Viziolodzhi Tekhnologiya Elena Novikova, Ivan Vakhmyanin, the company executive of Visiology and the founder of Viziolodzhi Tekhnologiya, Iskander Bariyev, the vice rector and the head of department of project and research activity of the Innopolis university and Denis Ismagilov, the head of department of work with investors of the Innopolis SEZ became participants at the event. 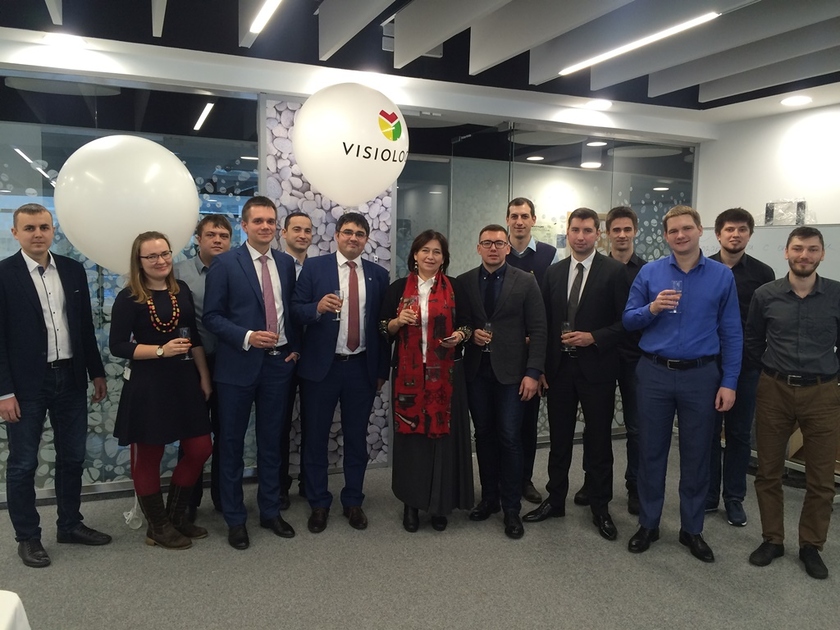 For December 9, 2016 in line-up of the team of development of Viziolodzhi Tekhnologiya six people, two are graduates of a magistracy of the Innopolis university, earlier cooperated with Visiology within the industrial project and now entered into staff.

In plans – cooperation with the university and acceptance in ranks of employees of talented students. In 2016 Visiology submitted the application for participation in the industrial project "Development of Mobile Application for a Component of the Analytical Visiology "User Analytics" Platform" and already passed the first selection round. On December 16, 2016 names of the students who selected the Visiology project as the thesis will become known and work on the new industrial project will begin.

On September 2, 2016 the Supervisory board of the Innopolis special economic zone approved five projects of the IT companies applying for the status of residents of the SEZ. The total amount of investments is 99.2 million rubles. The president of Tatarstan Rustam Minnikhanov held a meeting.

Among five approved candidates – the developer of BI solutions the Visiology company which is a part of Polymedia holding. Based on Innopolis the company opens office Viziolodzhi Tekhnologii LLC headed by the director of Visiology Ivan Vakhmyanin.

In addition to Visiology, the Supervisory board approved four more projects: Voice2Med from group of CST, the OPTIMUM platform from Tatmobaylinform Sidisi LLC, the Discipline system from Distsiplina Bolshiye Dannye LLC and mobile application of Lokforgate.

Protection of industrial projects of students of a magitratura Innopolis

On August 22, 2016 graduates of a magistracy "Management of software development" of the University Innopolis defended theses which customer companies already use in the work.

Students of a magistracy presented final industrial projects, tasks of which were set by representatives of the Russian IT industry. Protection took place within the unique program of university "Management of software development" which allows specialists to receive career development, to become the technical leader, the program architect or the project manager. As final work graduates of the program develop the real project with the partner companies of the university.

Pupils provided products on which they worked about "the Ak Bars as Bank", Visiology, Acronis, I-Teco, "Дневник.ру", SKB Kontur and Runa Capital. After the presentation students received estimates of specialists from the University Innopolis and responses of representatives of the companies working with students.

Creation of a system of the semi-automatic setup of the data warehouse focused on aggregation and representations of the interesting client of information in a graphic view, convenient for it, from hundreds of different analytical resources was a task of Visiology company.

The staff of technical specialists, engineers and programmers of the company made more than 50% of all collective by 2010. Gradually, by 2012 the company decided to open based on the head office Development center. The first product of the center became electronic flipchart Flipbox. Polymedia already plans an exit with it for international market.

2009: Opening of department of development and deployment of software solutions Polymedia

Since 2009 the Polymedia company involves engineers and programmers to the state, such development of engineering potential allowed the company to open ORVPR and to acquire the new status among other players of AV and IT market – "IT developer". The company issued a number of solutions. Hardware and software system VIRD (today "Polywall" is an editor's note) for operational management of visualization in the centers of decision making which already contains 39 implementations was very first.