Volkswagen Group is the German automobile concern. The headquarters of the company is in the city of Wolfsburg, Germany.
300px

At the end of March, 2020 it became known that Volkswagen sends 80 thousand employees on forced leave because of a coronavirus which led to drop in sales of cars and failures with deliveries of component parts. 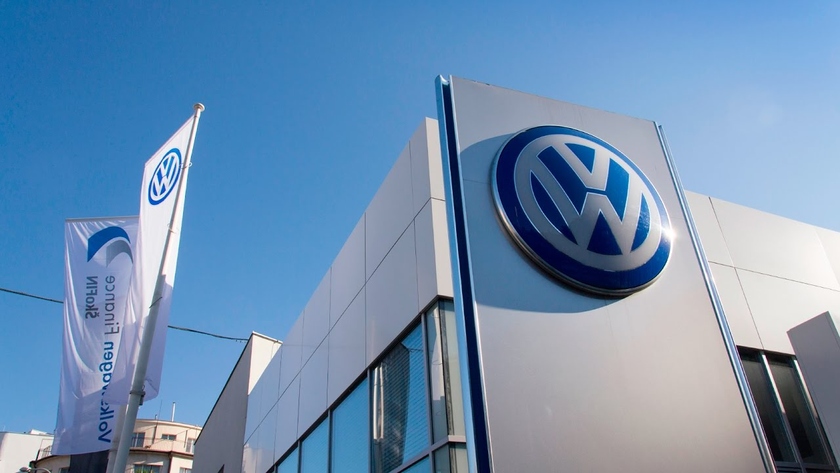 In this regard at the plants of the enterprise in Lower Saxony, Hesse and Saxony till April 3, 2020 will enter the reduced changes. According to the same diagram the division on production of the MAN trucks and also Audi and Porsche will work.

Also said Volkswagen that in connection with the shortage of the components delivered from the European plants, the carmaker temporarily will suspend production at automobile plant in Kaluga and contract assembly in Nizhny Novgorod for two weeks — from March 30 to April 10, 2020.

At the same time in the company specified that the period of suspension of production will be qualified as idle time and will be paid according to the legislation of the Russian Federation.

In the conditions of a pandemic of a coronavirus of Volkswagen made the decision to stop work in the headquarters in Wolfsburg and also on productions in Emden, Hanover, Osnabryukke, Zwickau and Dresden. Besides, spare parts at factories in Braunschweig, Salzgitter, Kassel, Chemnitz and sitting ceased to be made for cars.

Production in Spain in Pamplona and also in Palmel in Portugal is frozen, the plant in Slovakia does not work. Same concerns divisions of concern in Argentina and Brazil. In Mexico it is going to take a break since March 30, 2020.

Audis and Volkswagen changed the logos, calling society for self-isolation because of a coronavirus pandemic.[1]

In the middle of February, 2020 Volkswagen said that it will pay compensation to the German owners of the diesel cars for software which underestimated indicators of harmful emissions. This action will cost the German auto maker 830 million euros

In 2015 regulating authorities fined Volkswagen which used the special software for engine management in the diesel cars to hide excessive levels of pollution. Scandal became the reason of a multiplicity of suits. 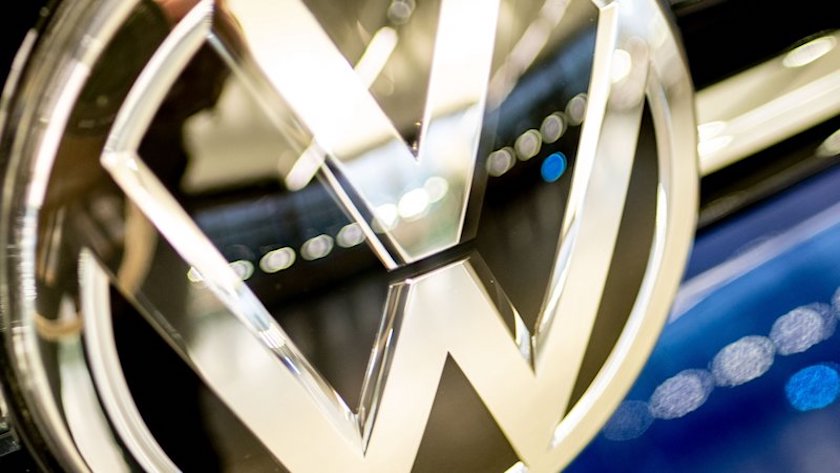 The offer arrived despite failure of negotiations with the German consumer association VZBV which agreed with Volkswagen about the conclusion of the settlement transaction.


Volkswagen said that it interrupted negotiations with VZBV because of excessive costs for payment of the lawyers representing consumer organizations. According to the company, lawyers demanded €50 million for the services. According to VZBV, negotiations failed because the car maker did not guarantee the system of compensation of damage which would be adequate to customer needs. The VZBV consumer association added that it will continue to try to obtain settlement on the terms of VZBV through the German courts.

According to the class action, compensations required about 460,000 owners of the diesel Volkswagen cars which are perturbed with manipulation of the prices.[2]

Creation of the company for development of the automobile IT platform

At the end of January, 2020 the Aeris Communications company specializing in solutions for IoT integrated with Volkswagen Group of America to create joint venture for development of the IT platform for vehicles. The new company received the name of Ventic LLC. Read more here.

2019: Opening of the new company for development of pilotless cars of Volkswagen Autonomy

At the end of October, 2019 announced Volkswagen creation of new subsidiary company which will focus on projects in the field of unmanned vehicles. The structure under the name Volkswagen Autonomy was headed by the senior vice president of VW for pilotless driving Alexander Hittsinger who was earlier also working in Apple corporation. Read more here.

On August 23, 2018 the Volkswagen concern announced investment of 3.5 billion euros into development of digital business. A part of means will go for development of a cloud platform to which cars and drivers for providing different services, including car-sharing will be connected.

Also announced Volkswagen development of the operating system under the name of vw.OS which will find application in electric vehicles of the company, since 2020. 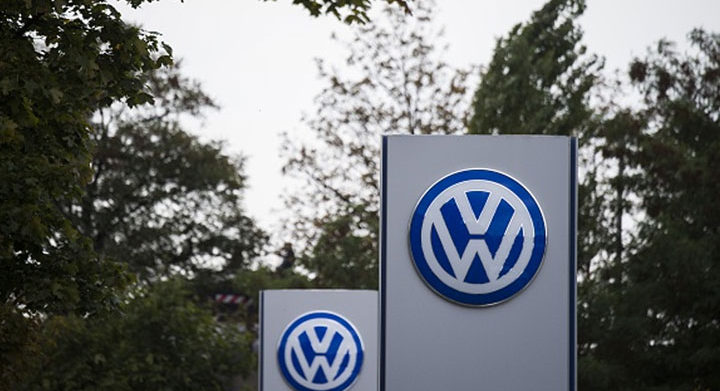 It is noted that the cars using vw.OS will receive absolutely new architecture of electronics which will facilitate implementation of functions of pilotless driving.

Instead of involving about 70 different sensors and controllers working independently of each other in each car in new machines of concern different sensors will be connected by means of the corporate operating system.

Thus, as notes Reuters agency, information collected by parking sensors can be connected with steering, brakes and cards of navigation that the car could park as soon as the dash camera notices" an empty seat for the parking.

Besides, created in OS company will allow to update easier the automobile software as in this case the car maker does not depend on software of third-party vendors.

Since 2020 Volkswagen is going to release machines only with connection to the Internet. Every year 5 million cars will become a part of Internet of Things.

The corporation expects to earn by 2025 about 1 billion euros due to providing new digital services, such as car-sharing, goods delivery and search of parking spaces.

In the second quarter 2019 of Volkswagen is going to start carsharing service We Share which vehicle fleet will have 2 thousand electric vehicles.[3]

In August, 2018 the German carmaker Volkswagen  announced complete transition to digital design of the vehicles. On it the company needed about two years.

Within digital transformation of Volkswagen began to use actively interactive constructions, big LED screens, technologies of virtual and augmented reality for three-dimensional modeling. For example, the staff of the company applies the special points allowing people who are in different corners of the planet at the same time to be connected to virtual space for work on creation of images of a product. 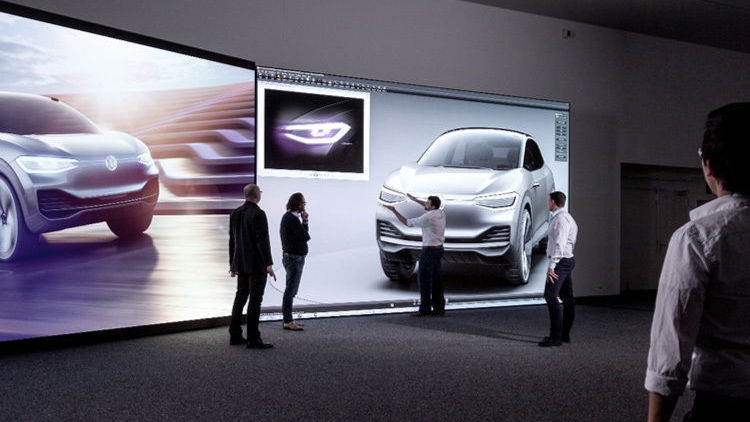 In August, 2018 the German carmaker Volkswagen announced complete transition to digital design of the vehicles

By August, 2018 all process of work of division of Volkswagen Design — from the beginning of project development and before receiving a new product — became completely digital. In Volkswagen say that it considerably increases efficiency of each stage and allows to interact with bigger productivity with different specialists.


For example, for the final approval of design of models of cars it is used 18metrovy the LED screen now. One of advantages of use of virtual modeling is considerable reduction of volumes of design of future models from designer plasticine that saves time and means. Since the middle of 2016 reduction of volumes of production of physical presentation models allowed to save the considerable amount of funds.[4]

The order of batteries for electric vehicles for 20 billion euros

Volkswagen ordered accumulators for electric vehicles for the amount of 20 billion euros. It was said by the CEO of the company  Matthias Mueller in March, 2018. According to him, the German auto giant signed agreements with suppliers of batteries and appropriate technologies from Europe and China where the company sells 80% of the cars. It is in the future going to involve the contractor from North America.

In November, 2017 Volkswagen approved the budget in 34 billion euros (about $40 billion) for development of electric vehicles, pilotless machines and digital services. Thanks to these investments the German carmaker wants to become the world market leader of electric motor transport, transfers Reuters news agency.

In June, 2017 announced Volkswagen the beginning of use of three-dimensional printing in production of parts for cars. Meanwhile, implementation of 3D-printers at one of the largest plants of concern replaced almost all production devices.

In June, 2017 Volkswagen began to make automobile spare parts by 3D method - printings. The transitional coupling for the Volkswagen Corrado model which is, however, laid already off became the first such product. By means of this adapter placed between a control knob the window regulator and a governor gear it was succeeded to prevent damage of a leather upholstery of a door. 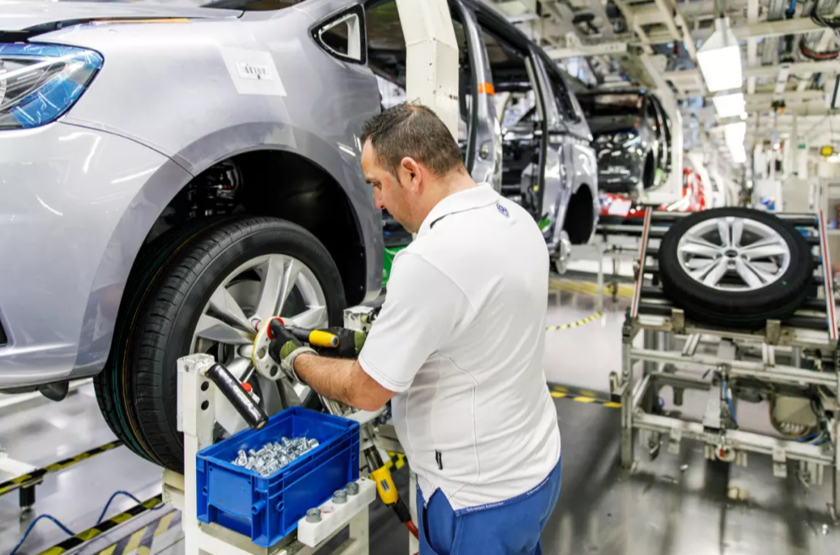 Also it became known of purchase of Ultimaker 3 and Ultimaker 2+ 3D-printers for the Volkswagen Autoeuropa enterprise in Portugal at which more than 100 thousand machines annually are produced. The printing equipment is used by the company for creation not of parts for cars, and special tools applied in assembly of motor transport.

It is noted that by June, 2017 by means of 3D-printers 93% of the working equipment which was bought from supporters of suppliers earlier are created. As a result the car maker reached economy about $150 thousand a year. About 4 thousand people work at the Portuguese factory. 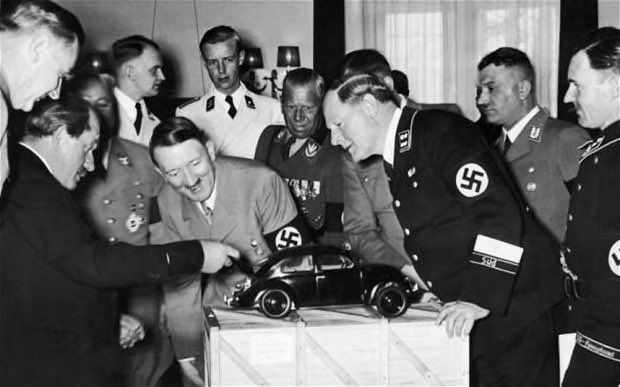 The designer of cars and the armored equipment Ferdinand Porsche (extreme at the left) shows to Hitler model of the first Volkswagen Beetle car (Volkswagen Beetle). Germany, 1934.