Partner of the project

The Data Processing Center (DPC) – a single multicomponent system which is designed to ensure smooth automated operation of business processes. Data Processing Center are created first of all for performance improvement of the companies which are actively using information technologies in the activity and also for quality improvement of the provided services.
Tasks | Advantages | History | Types of data centers | Principles of work | Structure of DPC | Advanced developments

Key services based on DPC

Service of placement and connection to communication channels of server or other telecommunication equipment of the client on the specialized platform of provider (data center, a data processing center, Telehouse). If the equipment does not belong to the client, and is rented at provider, the service carries the name dedicated (lease of a dedicated server, a dedicated server).
Determination | Advantages | Russian market | World market 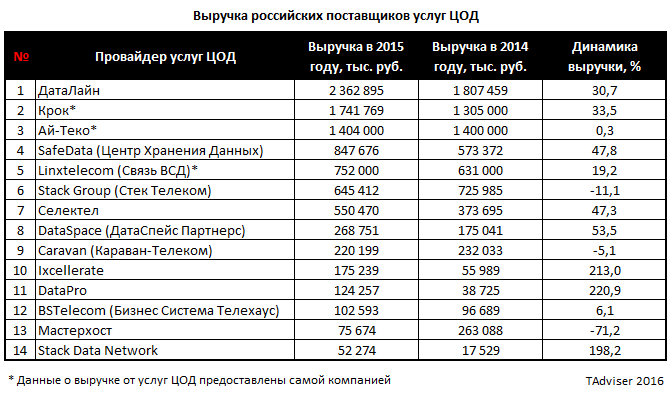 Trends in the Russian market of data centers

Many modern technology trends get "response" in a segment of data centers. As a rule, "running in" of technology is passed in the western companies providing services to DPC, and then appear in the Russian business. Today special attention in the industry is paid to such solutions as Internet of Things, convergent and program-controlled infrastructures [6] (more detailed).

Alexey Malafeev, TGC-1: The disaster-proof DPC based on two data centers should work as a unit

As a preferable measure of energy efficiency the indicator of Power Usage Effectiveness (PUE) — effectiveness ratio of use of energy is approved. PUE developed in Green Grid sets a ratio of total amount of the electric power consumed by DPC, and the amount of energy spent for power supply of the IT equipment.

The system of artificial climate – a separate system and it most differs from the typical equipment used in the majority of premises: feature of the premises of DPC - that servers require permanent, round-the-clock cooling and the heat sink even if the data processing center is placed with a pole. The solution of this engineering task will require the special equipment which consumes the considerable volume of the electric power.

Today in the world of World Data Centres are demanded by the companies of the communications industry, an oil and gas sector, large industrial and production holdings, the enterprises of the metallurgical sphere, power. The separate companies integrators in Russia continue to work on technological solutions in this sphere.

Main trends of the world market of DPC

Growth of cloud services became the predominating trend of the world market of data centers that leaves a mark on development of technologies for DPCs in all manifestations: with respect thereto the exponential growth of amount of data, mass transition to x86 architecture, implementation of virtual environments, aspiration of customers to quickly deployed solutions is noted, Big Data technologies and also technologies of infrastructure management of data centers and energy efficiency develop.

At what technologies of the companies modern DPCs work?