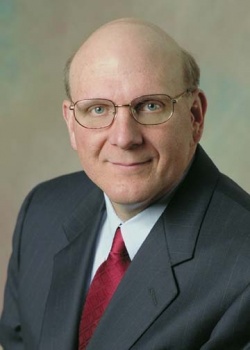 Steven Anthony Ballmer better known as just Steve Ballmer  is the American businessman holding a position of the chief executive officer (CEO) in Microsoft from  2000 to 2013.

Is one of the richest inhabitants of the planet. According to the rating of billionaires of The World's Billionaires made by the Forbes magazine  on February 11, 2008 Ballmer holds the 43rd place with the capital in $ 15 billion. He became the first billionaire in the world obliged by the fortune to options which is come into from the employer (Microsoft corporation) in whom he was not either the founder, or the relative of the founder.

Ballmer arrived on service in Microsoft in  1980, at once having become one of chief managers and the close associate of the founder of the companyBill Gates (Bill Gates). He directed development of the first versions operating systems DOS and Windows. For last years headed several departments Microsoft, including departments of transactions, development operating systems and also sales and technical support. In  July, 1998 he was nominated to the president's post. In  January, 2000 he was appointed to the position of the chief executive officer, having completely conferred on it responsibility for management of corporation.

In August, 2013 it became known that Ballmer will resign within the next 12 months. In remaining period he will continue to direct the company during a transient period and will help to find Microsoft of the new CEO.

The former head of the American company Microsoft Steve Ballmer left in August, 2014 the structure of Board of Directors, having finally left corporation. He intends to focus on management of the club of the National Basketball Association (NBA) of Los Angeles Clippers purchased on August 12, 2014 completely. On August 12 Steve Ballmer became the owner of club of NBA of Los Angeles Clippers. The transaction was closed after entry into force of court's decision of California which confirmed the right of the wife of the former owner - Donald Sterling to Rochelle - for sale of Klippers. According to media, the amount paid for club was about $2 billion. Ballmer's fortune is estimated in $19.3 billion.

The native grandfather of Ballmer on the maternal Shloma Dvorkin line was born and lived the most part of life in the city of Pinsk of the Brest region, Belarus. In the years of World War I together with thousands of refugees the Jewish family wandered on open spaces of the Russian Empire. For some time they settled down in the Saratov province, then a part of family Dvorkinykh returned to Pinsk, the family of the uncle Ballmer constructed a bakery there. Other part of family emigrated to the USA.

In 1920 in Detroit, Stephen's mother — Beatrice was born. In the same place she married the native of Switzerland Fred Ballmer.

Steve Ballmer was born  on March 24, 1956 and the State of Michigan, the USA grew in the neighborhood of Detroit. His father  is Frederik Ballmer  — emigrating from Switzerland at the age of 23 years, worked as the manager in Ford Motor company. As it became clear later, the will and persistence of the father strongly affected Ballmer's character already at youthful age.

In  1973, upon completion of school in Detroit, it becomes clear to Steve that the Harvard business school will be the best place where he will manage to receive a profession of an idol of that time, the father.

The entire period of training in Harvard for the assidious young man was filled not only abundance of studies and rates. He took active part in sports life of the university: directed the soccer team, it was published in two local editions  — the first literary magazine of the Harvard Advocate university and the Harvard Crimson newspaper. It earned by a hard work authority, respect, being gradually beaten out in number of the best students. The honors degree and degree of the bachelor of mathematics and economy became a result of his commitment. But it became not the only important event which considerably affected his further life: in Harvard he got acquainted with Bill Gates that soon defined his career way.

In  1977 Stephen finished study in Harvard and as the near-term outlook chose work in Procter & Gamble company where within two next years served as the assistant manager for production and product sales. Term was short because Stephen got used to give to case of all himself, working with all the heart and with eagerness. He did not observe similar aspiration at the staff of Procter & Gamble therefore he made the decision to leave the company.

In  1979 Ballmer was admitted to Stanford business school. Prior to the occupations at him on hand were few months during which he communicated with Gates. By then the young company Microsoft already represented the competitive enterprise, but in it Ballmer at that time had no thoughts of work yet. The decision on study in Stanford was considered and firm. So it also arrived.

After the first rate Steve seriously was engaged in job search for the summer. As one of right options it considered a vacancy in Ford company where tried to offer the practices in the field of creation of new investment projects. But in  1980 in the automotive industry of the USA there was a crisis therefore the work perspective in even if the large Detroit company where the experience of his father is calculated decades, did not promise perspectives. Bill Gates who needed the employee to the manager's position appeared in this situation in time. Here also very right decision of Steve Ballmer was accepted radical, but as now it is well known: the business school was left and  on June 11, 1980 its work for Microsoft which state at the time of its acceptance included only 23 employees began. The starting wage in the amount of $50 thousand a year and a part of stocks of the company was offered it. 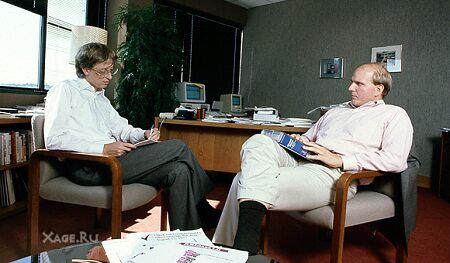 In  1998 Ballmer was raised to the president of Microsoft corporation.

On January 13, 2000 Bill Gates leaves a post of the chief executive officer of corporation and Ballmer comes to his place. Stephen most longer worked on Microsoft if not to count Bill Gates.

On October 25, 2007 the CEO of Microsoft ventured a trip home of the ancestors. Stephen arrived to Pinsk with the sister in honor of whose 50 anniversary conceived to perform a travel. The unofficial visit of the chief executive of Microsoft to Belarus lasted only one day for which Ballmer and his sister managed to visit the places connected with the Jewish history of Pinsk. At one of city Jewish cemeteries the local historian showed to the famous guest the place where his great-grandfather is buried. Steve Ballmer with the sister visited also near the building of the bakery which was once belonging to his uncle visited the Pinsk synagogue where they talked to the rabbi and lit candles in the memory of the died ancestors.

Steve Ballmer stores 80% of the means in stocks of Microsoft. 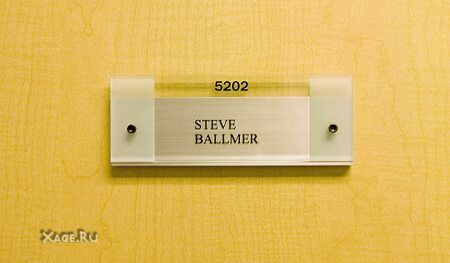 In May, 2011 David Einhorn, the head of an influential hedge fund of Greenlight Capital, during the presentation at the conference of Ira Sohn Conference in New York said that Steve Ballmer should resign from a post of the chief executive of Microsoft company as because of his management the software giant too slowly develops and loses the positions in the American and world IT markets. According to Einhorn, because of Steve Ballmer actions on a post of the head of the company of a stock of Microsoft practically do not grow in the price for the last years, and the company did not manage to begin expansion on the perspective markets of Internet services and mobile computers in time. The hedge fund of Greenlight Capital already long time owns a significant amount of stocks of software giant. According to Thomson Reuters, today the fund possesses about 9 million stocks of the company or 0.11% of their total quantity.

In August, 2013 it became known that Ballmer leaves a post of the head of Microsoft.

Steve Ballmer was known for insistence to employees. The power engineering specialist, discipline and enthusiasm of Steve Ballmer who has reputation of the vigorous, purposeful, sincere and dynamic person having good sense of humour and a big charge of energy for last years was transferred also to all Microsoft group. Steve says: "I want that everyone separated my enthusiasm concerning our products and services. I want that people understood what great opportunities are put in our software products which are capable to make business more successful, and rest — more saturated and interesting". He is ready to shout and to gesticulate disorderly if it is necessary for recognition of his correctness always meaning superiority of products of Microsoft over other. The enthusiasm and Steve Ballmer's leadership were brightly shown at any position which he held in the company.

Ballmer always differed in eccentricity and irascibility. As confirmation the last was served by hundreds of publications on the Internet and the press devoted to legal procedure of Microsoft and Google: the staff of corporation who selected from quality of new work location of Google in this connection forced to turn aside from the flying furniture and to listen at this comment, the containing strongest expressions eloquently told about Ballmer's fieriness. All this then is commented by it as excessive inflating of the happened insignificant incident.

On the Internet rollers of performances of Steve Ballmer on corporate actions are widespread. In the most known of them to the CEO of Microsoft it is nicknamed by "the dancing monkey" (dance monkey boy): after representation to public its energy and delight brimmed over. The leading person of the company, without caring for reputation, jumped, danced, widely swung hands and shouted nearly a minute. Several days later the developers conference at which Ballmer caused a stir again took place: address "Developers!" participants at the event heard a time in a row from the head of company 14, at the same time it at all the clothes which got wet from sweat and a look represented the violent aspiration to be heard and understood.

To competitors of Microsoft not one ten times was necessary to redden and constrain emotions in response to sharp remarks CEOs of Microsoft: the dishonoring comparisons, outright threats — all this pours from lips with enviable abundance. So, free of charge distributed Linux operating system was called "a cancer tumor which destroys intellectual property in everything what will touch", it was also "that line of communism for which it is so strongly loved". Aggressive, but legal (occasionally the border already seems crossed) actions are taken by Ballmer even more often. Many heads of the competing companies and the partner companies note that the founder of corporation Bill Gates differs in amazing obstinacy, persistence and firmness in the solutions that sometimes causes unpleasant bewilderment, feeling of powerlessness or anger. But in comparison with the assistant, he does not seem is as follows at all: quite often Ballmer shows manifestations of improbable greed and uncontrollable arrogance.

On August 5, 2015 the authoritative magazine Forbes published the rating of the most secure figures of the information technology industry. Steve Ballmer's fortune was estimated in $22.7 billion Read more here.

In August, 2016 the Forbes magazine provided the rating of the richest businessmen in the field of the information technologies (IT). Steve Ballmer's fortune was estimated in $27.7 billion Read more here.

The Microsoft company defined not only future career of Ballmer, but also private life. He married Connie Snyder working in agency on public relations of Microsoft. This woman became mother of three his children.

Steve Ballmer with the spouse on acceptance in the White House in honor of the president of China, on January 19, 2011. 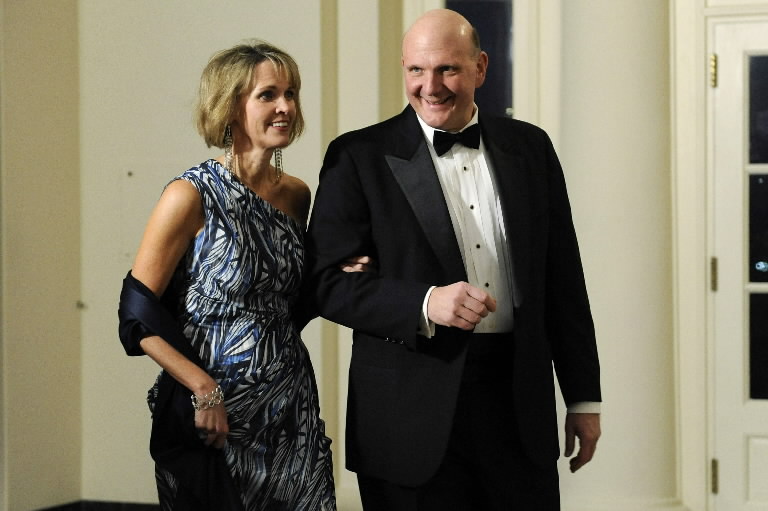