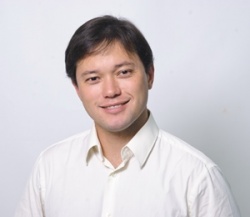 In 1998 graduated from the Astrakhan State Technical University (ASTU) in "Accounting and audit", having gained the honors degree.

In 2005 graduated from Academy of National Economy under the Government of the Russian Federation, and in 2009 - Saratov State Academy of Law as Lawyer.

Besides, Management-Mezhdunarodny business" was trained according to the federal program of management training ".

In 1995, being a student of the 3rd rate of AGTU, Renat Batyrov based and headed the Pilot group specializing in sales software and IT services.

In 2012 opened in Astrakhan the private Fabrika IT park for support of young specialists and startups.

In February, 2014. Batyrov announced the appointment as the CEO of technopark Skolkovo.

"The offer to become the CEO of technopark Skolkovo arrived unexpectedly. I at all never had a summary, and I, naturally, did not send it anywhere. I never in life appeared on an interview on the other side of a table – as the applicant. Besides, I never and anywhere got paid, except as in the company", - marked out Batyrs concerning the appointment.

According to Renat Batyrov, for discussion of the candidate he met personally the president of Skolkovo FoundationVictor Vekselberg who estimated his experience of "creation of the Russia's first private technopark organized in Astrakhan completely on own money without government subsidies and investments".

2020: Investment of $100 thousand into Almamat startup

Renat Batyrov, the CEO of Technopark Skolkovo, invested $100 thousand in Almamat company — the career IT accelerator working on the revenue share model: instead of payment for education graduates will deduct two years to a startup monthly percent from the salary. Investments are going to be enclosed in development of the project which main objective — training in IT professions with the subsequent employment in the specialty. The Almamat company reported about it on June 25, 2020. Read more here.

Since December, 2011 is the deputy of the Duma of the Astrakhan region of the fifth convocation on the 19th district.

Despite the moving to Moscow and taking office of the CEO Skolkovo in February, 2014. Batyrov continued to be the deputy of the Duma of the Astrakhan region on the 19th constituency.