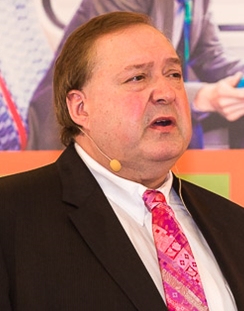 Since April, 2012 - the corporate vice president of Microsoft for the Dynamics CRM direction. In this position is responsible for the long-term strategy and the technology direction of development of a product, including development of cloud versions of Dynamics CRM.

Bob Stutz experience in the development area of business applications makes more than 20 years. Before arrival to Microsoft it worked as the senior vice president and the general manager of the Business Solutions direction in HP where was responsible for the direction of applications for financial services, communications, airlines and medical institutions.

In front of HP Stutz worked about 5.5 years in SAP where held executive positions in the different directions. Among like those - development of the system of SAP CRM of version 7.0. To SAP Bob Stutz was the vice president of groups of development in Siebel Systems which in the middle of the 2000th was purchased by Oracle.

2013: Criticism of the CRM systems of SAP and Oracle

The corporate vice president of Microsoft for Dynamics CRM Bob Stutz at different times participating in development of the CRM systems of SAP and Oracle in December, 2013 shared the opinion on products of main competitors of corporation with TAdviser.

The CRM system of SAP, in particular, is noncompetitive if to compare it to the system of Microsoft, or with SalesForce, or "even with Oracle", he considers.

"First, they now at all have no cloud product, there is no full-function cloud solution for the customer, it is only a product for the self-contained unit, - Bob Stutz says. - And really it is developed only for interaction with ERP systems from SAP".

Speaking about other large competitor -SalesForce – Bob Stutz said that his products "are actually based on technology, which already 14 years, and the user interface same which was provided 14 years ago".

"There nothing changed. And if to look at our user interface, at its flexibility, at opportunities... We have many new clients who upgrade to the new version of our solution with SalesForce, and there is enough in high gear, - he noted. - Analysts began to say already now that the latest version of Microsoft Dynamics CRM is better, than at SalesForce".

Concerning the CRM system of Oracle the corporate vice president of Microsoft for Dynamics CRM noted that "it has the same problem, as at SalesForce, and actually, it is even worse: Siebel is a system which already 15-20 years, new versions were not put on the market since 2005-2006".

He also added that for the last one and a half years his company implemented a lot of functionality in the product, concerning such directions as sales, marketing and customer service that was not earlier.

It should be noted that in 2012, according to Gartner, the share of Microsoft in global market of CRM made only 6.3% against the background of the leader's share - SalesForce - in 14%, SAP – 12.9% and Oracle – 11.1%. About it Bob Stutz notes that a market share - "a cunning thing" which can be calculated differently. Just calculation of revenue of vendor - an inexact algorithm of calculation of a market share, he is sure: "if to look at the number of customers who unrolled a system in real operation, on quantity of the unrolled jobs then here and you begin to receive real digits which can be used". The licenses purchased from many competitors as a result are not used, Stutz added. According to Microsoft, in 2013 the number of users of its CRM system contains more than 3.5 million, and clients - about 40 thousand.

In the Russian representative office of SAP concerning expressions of the top manager of Microsoft told TAdviser that Bob Stutz who is one of recognized experts in CRM world is not up to the end informed on the current state of a product portfolio of SAP. Put including to them, the ideas in the SAP CRM platform bore fruit, and now SAP CRM is the recognized leader in the market of solutions for customer relationship management that is confirmed by reports of professional analysts, the leading expert of SAP CRM in SAP CIS Anton Nozdrin says.

"The SAP solutions CRM in all models of deployment are easily integrated not only with traditional ERP solutions, but also with specific industry solutions, any other SOA-applications and, certainly, with office products of Microsoft, - he notes. - The cloud solution of CRM - SAP Cloud for Customer - is available long ago in the market for all comers including in the CIS countries, and represents the full-function solution on sales management and service, supports multichannel customer interactions using such modern communication channels as social networks".

Oracle, in turn, provided TAdviser slides from the corporate presentation in which its CRM system is called No. 1 on number of jobs: "in the last year (last year on which data are given in a slide is registered 2011 - a comment of TAdviser), jobs of Siebel it is unrolled more, than from all other suppliers of CRM totally". The total number of jobs of Siebel specified in the same place is 7.1 million.

Other slide of the corporate presentation of Oracle is devoted to an investment strategy of CRM, the containing diagram of a release of new versions of a system. In it it is reflected that a system in 2013 the company updated Siebel of versions 8.1 and 8.2, for 2014 the release of version 8.3, and is planned for 2017 - version 8.4.