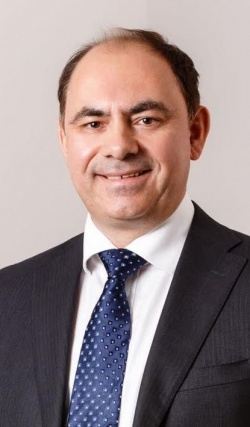 Sergey Vladimirovich Chernovolenko in 1986 graduated from the Moscow boundary institute, the commander of a motorized infantry company. In 1998 became the graduate of Financial academy at the Government of the Russian Federation, banks and banking. Completed a course in INSEAD, the Growth through Service program.

Since 1994 held a position of the Assistant to the President of International Bank of Trade & Commerce bank.

1997: The head of department in Xerox Russia

Sergey Chernovolenko joined Xerox in 1997 as the Head of Department of administrative work and security. Within six years he directed different activities of Xerox of Russia and CIS.

In the years ahead Sergey's career developed in other regions entering into division of Xerox of DMO (Developing Market Operations) which is responsible for business development of corporation in emerging markets. So, in 2004 he headed representative office of Xerox in Turkey.

2007: The head of Xerox of CIT in Central and Eastern Europe, Israel and Turkey

Since 2007 it was appointed the vice president and the CEO of Xerox of CIT whose part Central and Eastern Europe, Israel and Turkey are.

In 2012 Mr. Chernovolenko was appointed to a post of the vice president for business development of supplies of division of Xerox of DMO (Developing Markets Operations, transactions in emerging markets).

From November 1, 2013 to December, 2014 Sergey Chernovolenko directed business of Cisco in Russia. It released Pavel Betsis who decided to pass to other work after four years of activity as the head of business of Cisco into the Russian Federation from this duty.

In January, 2015 Sergey Chernovolenko returned to Xerox on a post of the head of Xerox again Eurasia where it replaced Vladimir Lavrov who made the decision to leave the company. At this position Sergey is responsible for business development and strategic positioning of Xerox in the territory of Eurasia in the field of promotion and service maintenance of the equipment, technologies and services in information management and documents.

On May 22 the Softline company, the supplier of IT products and solutions in emerging markets, announced Sergey Chernovolenko's appointment the global CEO. The relevant decision was made by Board of Directors of the company. The founder of Softline Igor Borovikov will focus on the solution of strategic issues of development of the company as the chairman of the board of directors of group.

The global CEO of Softline is entrusted with the solution of the following tasks:

In May, 2020 in an interview of TAdviser Sergey Chernovolenko, the global CEO of Softline, told about results of 2019 and plans for the future. Read more here.

Sergey Chernovolenko is interested in the history of Russia, likes to play soccer.

He is married, has three children.