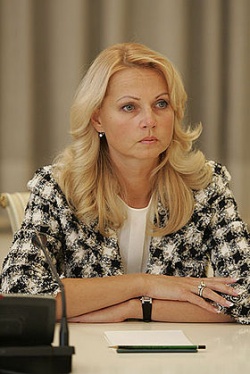 Golikova Tatyana Alekseevna was born on February 9, 1966 in the city of Mytishchi. In 1987, having graduated from the Moscow institute of the national economy of Plekhanov, she gained the diploma in "work economy". And from the same 1987th to the 1990th year Tatyana Golikova worked as the junior researcher of Salary office at Research institute of the Work Goskomtruda Soyuza. In the 1990th year she climbed a career ladder and till 1992nd year worked as the economist of 1 category and also the leading economist of Summary department of the State budget of the Ministry of Finance of RSFSR.

In 17 years of the professional activity in the Ministry of Finance, Tatyana Alekseevna passed a difficult and serious way, having managed to achieve much and to take strong positions in department. It belonged to the main authors of the Budget Code of the Russian Federation. It drafted thirteen annual laws "About the Budget" and also the first in the history of Russia, the three-year budget of the country. Under the leadership of Alexey Kudrin, Tatyana Alekseevna took active part in formation of Stabilization fund. Tatyana Golikova is the author of budget classification of the Russian Federation, in this important document all income types and expenses, sources of a covering of deficit of budgets and also itemized differentiation of tax revenues between levels of the power were coded. Tatyana Alekseevna took part in process of a legislative design of off-budget funds of the Russian Federation, it, first of all, concerns the Pension fund, Social insurance fund and also Fund of compulsory health insurance. Thanks to it, ordering of social payments was provided with the transparent procedure of formation and expenditure of funds. In October, 2004 it was awarded Medals of the Order "For Merit to the Fatherland" of the I degree — for active participation in legislative activity. Tatyana Golikova entered into the federal legislation public normative obligations thanks to which reductions and reductions of budgets for social payments were prohibited. For that time while Golikova worked in the Ministry of Finance, the budget of Russia, for the first time after crisis of 1998, became surplus.

Besides, in 2003 Tatyana Golikova became the Winner of a national award of public recognition of achievements of women Olympia of the Russian Academy of business and an entrepreneurship, she is also a Winner of the international award "Person of Year 2008" in the "Person in Public Administration" nomination, and since 2003 - the Valid state councilor of the Russian Federation of 1 class.

Till May, 2018 - the head of Accounts Chamber of the Russian Federation.

On May 18, 2018 it is appointed the Deputy Prime Minister of Russia concerning social policy.

On January 21, 2020 it is again appointed the Deputy Prime Minister of Russia.

Since 2003 Tatyana Alekseevna is married to Victor Khristenko who was the Minister of Industry and Trade who is nowadays heading Board of the Eurasian economic commission. Spouses have no children.