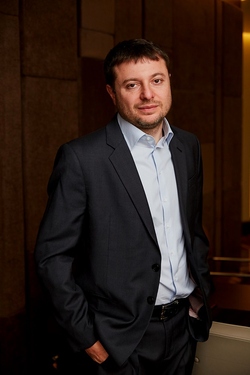 Hotimsky Sergey Vladimirovich, co-owner, the first deputy chairman of the board of PJSC Sovcombank.

Sergey Vladimirovich Hotimsky was born on April 12, 1978 in Moscow. In 1999 graduated from the International university in Moscow (MUM) in "law".

Before arrival to the financial sphere Sergey Hotimsky participated in creation of several feature films, sign for the Russian cinema. From 2001 to 2005 Sergey Hotimsky acted as the producer of the legendary movie of Polygon-DMB studio and also continuations of the movie and series based on the movie.

Sergey Hotimsky came to banking business in 2001, having purchased together with Mikhail Klyukin and partners Buykombank - the small regional bank from the Kostroma region which received afterwards the new name - Sovcombank.

For May, 2018 Sergey Hotimsky and his brother Dmitry Hotimsky possess more than 30% of stocks in the company controlling 100% of Sovcombank, and Sergey takes active part in bank management as the First Deputy Chairman of the board. Also Sergey Hotimsky is a part of the Supervisory board of PJSC Sovcombank.

From the moment of purchase of Buykombank in 2001 by April, 2018 assets and the capital of bank grew in several thousand times, and the bank was included into the twenty of the largest banks by the amount of assets and into the three of the largest Russian private banks. Market participants and analysts connect phenomenal progress of Sovcombank, first of all, with the managerial genius of Sergey Hotimsky and financial intuition of his brother Dmitry.

"The main point is that we quickly make the correct decisions. Good solutions are based on knowledge. On very deep understanding, whether it be the industry, macroeconomic or regulation. At us happened happy a bow - key shareholders are the managers involved in daily work of bank. My brother Dmitry Hotimsky is engaged in our corporate risks, I - responsible for retail risk. We together, I consider, are rather qualified in macroeconomic which always very strongly influences banking business" - Sergey Hotimsky in an interview to the Ekspert magazine said.

Its rate for work with a segment of elderly clients which to Sovcombank any other bank did not perceive as target audience of classical banking products became other important success factor of Sovcombank.

"Over time it became clear that pensioners are good and regular customers. They are able to save money, bring them to bank, they have a disposable income which they can spend for interest payment on the credit", Sergey Hotimsky argued in a conversation with RBC in 2016.

Practice showed that the borrower pensioners approaches service of the credits much more responsibly, allow non-payments and delay much less often, and sometimes and are even more solvent clients, than able-bodied young clients. According to Sergey Hotimsky, this circumstance allowed bank not to go to crisis of 2014-2015 at a loss on a portfolio of the retail credits.

Over time Sergey Hotimsky's Sovcombank stopped being exclusively retail bank issuing the unsecured credits to pensioners. Since 2015 the bank underwent fundamental transformation and developed the direction of corporate investment business, mortgage crediting (a mortgage and car loans). For April, 2018 the Sovcombank takes the 4th place among the largest investment banks on the volume of the organization of bond issues in the Russian market and is the largest private bank in this segment.

The Sovcombank is also one of market leaders of car loans, holding the 4th place in a Банки.ру portal ranking on the volume of a portfolio of car loans at the end of 2017 and being the largest private bank in this market. The bank enters in top-20 the largest banks (the 11th place) in the market of mortgage lending on the volume of the issued mortgage loans in 2017 according to the analytical agency Rusipoteka.

Sergey Hotimsky is also a founder of Future Now charitable foundation. By 2018 the fund initiated the project of support and social care of the orphan children and families accepting them on education. Thanks to active cooperation with administration of the Kostroma region for the last several years the number of the orphan children and children without parental support needing the family device decreased more than twice. The amount of financing by fund of this social program "I Want Home" was more than 100 million rubles.

Sergey Hotimsky is a keen collector of canes. Its collection for 2018 is one of the richest in Russia.