Dell EMC (business in Russia and the CIS)
CEO 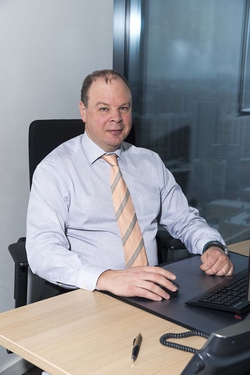 All my ancestors about whom I though know something were born in Moscow so I am the most Moscow born and bred, - Sergey Karpov in 2012[1] told[1]. - The family was the most normal, mother worked as the architect, and the father in RKK "Energiya" was engaged in development of the space equipment, but then nobody could speak about it. And of course, in the childhood I dreamed to become an astronaut. When I finished the second class, we moved to the new then Region of Matveevskoye, but I and remained at the school (there my grandmother worked) and with third on the tenth class itself every day went on lessons and back by the electric train and by the subway – about an hour one way. Then it seemed normal.

The mathematics was a favourite subject, everything was pleasant, connected with natural sciences. Actively did not love Russian and literature, and now very much I am sorry about it: these are things which define human life as the citizen of the country.

At that time information technologies were not as widespread as now, and the computer was in general something desired and inaccessible, and I wanted that future profession was surely connected with a computerization. Therefore after school I entered the Moscow Institute of Economics and Statistics (MIES). It was madly interesting study there. Personal computers then were not, we worked at big computers. And what was costed by one feeling: you do what almost nobody knows and does not understand!

In 1982 Sergey Karpov graduated from faculty of economic cybernetics of department of applied mathematics of the Moscow State institute of statistics and information science.

After institute I got on distribution to computer center of the Main military clinical hospital of Burdenko where new machines of the EU were installed to a computer. The hospital was very well automated, there already then, more than 25 years ago, the serious information system was installed, and the doctor could display the monitor in the office all data from the clinical record, analysis results, etc. Generally, to the newly made programmer and the system administrator was where to attach the knowledge and enthusiasm.

Then I decided that I lack fundamental mathematical education, and arrived on a three-year engineering flow of the mekhmat of MSU. It was the excellent school, mekhmat very well sets straight, teaches a system view on problems and to ability to be engaged in self-education. Therefore I am still very grateful to the wife who within three years suffered my evening study, having undertaken cares of the house and the child. And she then worked full time, and we had no nurses.

In 1987 Sergey completed training at an engineering flow of mekhaniko-mathematical faculty of Lomonosov Moscow State University, and in 2002 gained the diploma of MBA Business School, UK Open University.

From development of ERP in cooperative in sellers of CSS

Then there was a computer center of Institute of physics and technology problems, there we together with several colleagues organized Lokis cooperative which was engaged in programming of the fact that it is called ERP systems now. But since some moment I began to feel that programming stopped being for me something interesting and inspiring, and turned into ordinary craft. Generally, thoughts of occupation change appeared.

It was the beginning of the 1990th years so financial reasons were present at these thoughts too. I came according to the declaration to Aerofirst company (it is known for the duty free shops), but there offered me such option: they will recommend my candidate to the Irish company CSS which shortly before that came to Russia and was engaged in service of IT infrastructure of Aerofirst. However in CSS I was told that there are no engineering vacancies, and there is a position of the representative on sales of the IT equipment.

It was the key change in my life – essentially new work on style and a method of thinking was offered me. It was psychologically very heavy to make the decision. We long discussed it with the wife, I literally did not sleep night before answering "yes". But everything appeared not so terribly (though I only somewhere in half a year began to understand normally the Irish English of the colleagues). A problem only in what the person is ready to and as he perceives changes in the life. It is possible to have complex and be nervous, but, probably, the best exit consists of such situation in accepting the happened changes and to configure itself on a positive harmony. I would always like to be the optimistic person, to live with a smile, but not with a fig in a pocket.

1995: Compaq Computers: from the system engineer to the sales director

Since 1995 Karpov directed department of corporate solutions in the Russian division of Compaq Computers.

The CSS company became one of the largest dealers of Compaq in Russia and when in four years in 1995 Compaq opened the office in Moscow, I was invited there to work. At first I was a system engineer on pre-sale support, then the technical director, then the sales director there. In Compaq everything started from scratch, and it was interesting. Besides, it was the first experience with representatives of the American management style business which as it appeared, assumes lack of emotions in business communication, exclusively correct form of expression of disagreement, ability to accept a management position even if you do not support her and to execute the made decision. All this strongly differs from what we got used owing to the education to. I do not want to give characteristics what style "good", and what "bad", I think that it is possible to estimate management style any company only based on its activity. It is the main conclusion which I drew after many years of work in the western companies.

2002: The head of Hitachi Data Systems in Russia

Since 2002 headed the Russian division of Hitachi Data Systems (HDS).

In 2002 Compaq was purchased by Hewlett-Packard company in which there was absolutely other culture of management, and I decided to accept the offer of Hitachi Data Systems to head its opened office in Russia. The first several years until the office got on feet, work was just enchanting there. It was very interesting, especially when it began to turn out, but also it is very heavy, including psychologically. So, frankly speaking, that I would not like to be engaged in startapny business more.

In September, 2009 it was appointed the CEO of EMC in Russia and the CIS.

When I was invited in EMS company, and I with great pleasure agreed, no doubts concerning transition existed. EMS are rather young company, in it there is internal dynamics, and I see for myself an opportunity to make here something significant. It, probably, is also my main criterion of work.

In 2016 Dell was purchased by EMC. In April, 2017 announced Dell EMC Sergey Karpov and Boris Scherbakov's appointment who was earlier heading Dell in Russia to positions of vice presidents and CEOs of the Russian offices of the company located in Moscow. Not only Russia, but also Kazakhstan and other countries of Central Asia falls within the scope of their responsibility. Karpov and Scherbakov are responsible for development of all directions of business of Dell EMC — infrastructure solutions, services and the client systems — on the built sales channels.

In July, 2017 Sergey Karpov decided to leave the company with the purpose to continue career beyond its limits.

In October, 2017, according to the USRLE, Sergey Karpov was appointed the CEO of Ingenico company - the Russian legal person of the French Ingenico Group. The same work location is specified on its page in LinkedIn social network. The main activity of Ingenico is production of POS terminals and payment solutions on their basis.

According to the USRLE, in 2017 at Ingenico heads already several times changed. Till May, 2017 the company since 2012 was headed by Pavel Alexandrov who was replaced by Tatyana Maryukhna, and then the position of the CEO was held the Beater by Charles-Edouard René Mark.

Excerpts from an autobiographical interview with Sergey Karpov in 2012[1] are included below[1].