Government of the Russian Federation
Chairman 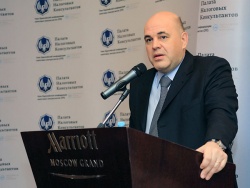 Mikhail Mishustin was born on March 3, 1966 in Moscow.

In 1989 graduated from the Moscow machine-tool institute (nowadays Moscow state technology university "STANKIN") in "automated design engineering systems", in 1992 – a postgraduate study of this institute.

From 1992 to 1995 – the director of test laboratory of "The international computer club" - non-profit organization which actually brought on the Russian market of such multi-national technology giants as Apple, Intel, Hewlett-Packard, IBM, Motorola, etc.

1996: Chairman of the board of "International computer club"

In August, 1998 it was appointed to a position of the deputy manager of the State Tax Administration of Russia.

1999: The deputy minister of the Russian Federation on taxes and fees

2004: Agency head of the inventory of a real estate

From 2004 to 2006 headed the Federal agency of the inventory of a real estate.

In 2007-2008 directed Federal agency on management of special economic zones.

2008: President of UFG Group. The total revenues of family for several years in tens of millions of dollars

In March, 2008 it was appointed to the position of the president of UFG group (OFG Invest) – one of the largest companies working in Russia in the field of asset management, direct investments and also mutual investment funds together with Deutsche Bank.

Mishustin became the president of UFG Capital Partners and the managing partner of UFG Asset Management who are included into UFG group. As the partner it was entered into the list of owners from shares of 25% in the funds which are already created at that time, and during creation of new funds also became the founder from shares of 25%.

Partners then developed joint plans for future business development. The decision was made that in addition to participation in development of the existing directions Mikhail Mishustin will also supervise expansion of the international presence of UFG, development of venture investment and technology investments and also infrastructure and agricultural projects.

The agricultural project in Bryansk "UFG agro Partnery" in which the company began to invest in May, 2008 was one of projects which were kept by Mikhail Mishustin. There was an abandoned, dumetose earth. And we for several years on 38 thousand hectares organized high-tech agroproduction of wheat, barley, soy. The company was one of the largest taxpayers in the region and one of the key enterprises creating jobs. More than $30 million investments were invested in the project, the zernosushilka is constructed, the equipment purchased, the advanced western agrotechnologies thanks to which it was succeeded to increase more than three times productivity from hectare in comparison with productivity of farmlands in the region are implemented. The advanced pochvosberegayushchy technologies of plowing of the earth and rotation of a harvest were used. Afterwards, in 2014, business was sold to one of the largest Russian agroholdings in Russia with project value addition in a ruble equivalent almost twice. The project was successfully implemented by the potential put by partners at a stage of its formation in 2009.

In April, 2008 for a beneficial ownership all the assets connected with UFG, Mikhail Mishustin founded a family trust. Mikhail Mishustin and his family were beneficiaries of a trust. It is customary practice for partners of large investment companies worldwide.

Through this trust Mishustin owned 25 percent shares in already created at the time of the arrival of funds and during creation of new funds became the founder from shares also of 25%.

Its remuneration as the key head in 2009, for example, was made by about 79 million rubles, or about $2.5 million that was declared by it in 2010. It is important to note that бóльшая a part of this remuneration — bonuses according to transactions which in case of success are significantly higher than salary. It is customary practice of investment companies.

In March, 2010 Mikhail Mishustin accepts the offer to return on public service and fulfills the requirement to government employees about lack of commercial participation in private companies, having given 100% of property of a trust to the spouse Mishustina Vladlen Yurevna with the obligation to partners of UFG about sale of these assets.

("Due to the passing of civil service it is forbidden to the civil servant: participate in management of commercial or non-profit organization, except for the following cases" — Paragraph 1.3 of Article 17 of the Federal law "About the Public Civil Service of the Russian Federation" of 7/27/2004 No. 79-FZ)

However the crisis period proceeded, and once it was impossible to sell all assets in 2010. With respect thereto partners of UFG agreed with Mishustina that will redeem shares from it as on them there are buyers suiting partners of UFG.

I will note also that at the conclusion of transactions about an asset sale of UFG it was necessary to consider the corporate interests of the company (the party, absolutely foreign to us cannot be the buyer). The fact that asset sales were performed to partners of UFG and/or the persons affiliated with them is explained by it. Despite payment by installments of payments to Vladlena Mishustina, upon transition of the property right of her shares to the company it was performed in 2010 at once. The fact that as a part of founders and partners of funds there are no politically significant persons is vital for compliance to internal and external requirements and also standards of supervisory authorities of the different states, investors and partners.

In 2010-2013 Vladlen Mishustin gained income from a trust of UFG and declared it in the amount of $11.55 million in total in four years. Directly in the declaration the amount, of course, was specified in rubles. At the same time declaring was not only the requirement of the Russian legislation, but also the requirement of internal regulations of UFG.

In 2013 the new federal law "about introduction of additional restrictions not only for government employees, but also their spouses and minor children" and with respect thereto Vladlen Mishustin had to transfer the trust to the third party was adopted. But under the terms of the initial agreement with UFG she could not transfer unrealized assets to the stranger in order to avoid risks for the UFG group in general. It in practice of investment funds excludes risks of acquisition of shares by unfriendly shareholders. Therefore the parties made agreed decision to transfer the remained assets of mother and the sister of her spouse — to Mishustina Louise Mikhaylovna and Stenina Natalya Vladimirovna. In August, 2013 the trust is transferred to the possession of new beneficiaries, and already they gain further income from an asset sale.

In 2013-2015 income from Louise Mikhaylovna's UFG was $11.9 million, and Natalya Stenina for the same period of $10.1 million. These amounts are reflected in their declarations in rubles.

Thus, the total amount of income of all three beneficiaries from a trust of UFG from 2010 for 2015 was $33.55 million that at a current rate there correspond 2.15 billion rubles. Any other income which could be received further on converting because of exchange differences, income from the deposits and possible other investments which are not connected with UFG about which I cannot know do not enter this amount.

In the years ahead payments in their address were not made due to the lack of buyers for the remained shares. Only in 2019 the company managed to close the transaction on final sale.

In February, 2009 Mikhail Mishustin entered a talent pool of the Russian President.

2010: Head of the Federal Tax Service

On April 6, 2010 it was appointed the head of the Federal Tax Service.

2011: An annual income according to the declaration of 24.5 million rub 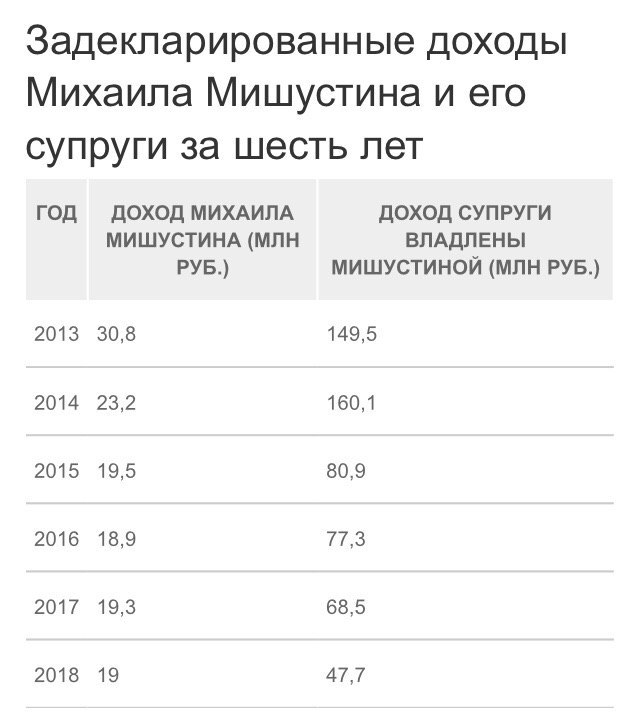 On January 15, 2020 the president Vladimir Putin suggested to appoint Mikhail Mishustin to the position of the prime minister. Mishustin agreed to hold this post, his candidate is submitted for consideration in the State Duma, the Kremlin press service reported.

The State Duma will consider a question of Mishustin's appointment to the prime minister's post on January 16. In the evening on January 15 the speaker of the State Duma Vyacheslav Volodin organized an emergency meeting of Duma council with participation of heads of all fractions, the adviser of the speaker Anastasius Kashevarov reported. Mishustin met members of council. 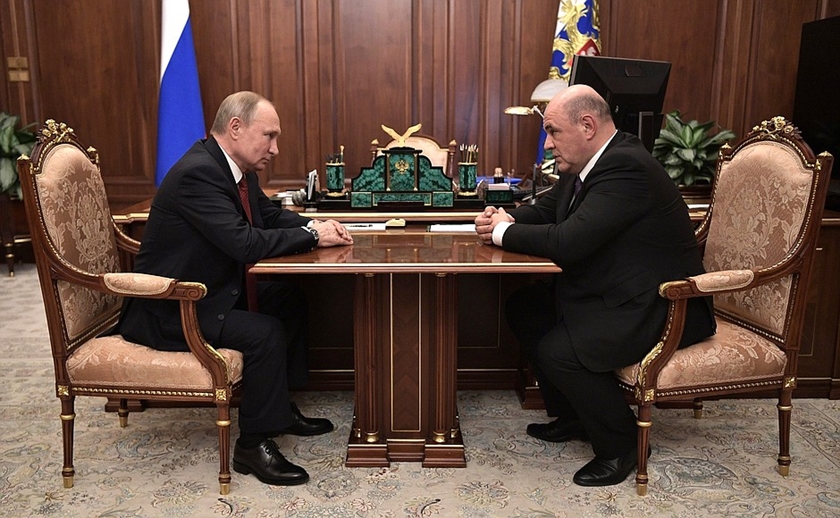 In addition to wealth of experience on civil service Mikhail Mishustin is closely connected with the IT field. He got an education in this area, in the 90th worked in the IT companies, and FTS under its management turned into one of the most digital departments in Russia. The powerful technology base was created, the electronic services allowing taxpayers the majority of issues from tax develop to resolve far off. At the expense of a number of the implemented systems the number of tax audits several times was reduced. On what IT suppliers department - in the separate article relied.

The offer on a new post arrived to Mishustin on the same day as Dmitry Medvedev announced resignation of the government. It occurred after the president announced changes of the constitution. Members of the government will remain at the duties before formation of the new cabinet. And Medvedev after resignation will become the vice-president of the Security council, he will be responsible for questions of defense capability and security of the country.

Detection of a coronavirus of COVID-19

On April 30, 2020 Mikhail Mishustin reported that he reveals COVID-19 coronavirus. The prime minister told about it during video conference with the president Vladimir Putin. 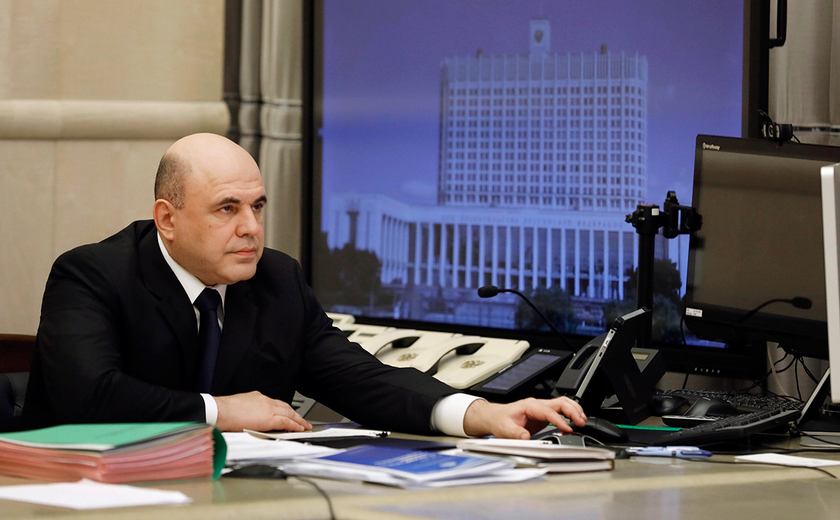 The prime minister of Russia Mikhail Mishustin caught a coronavirus

According to Kommersant, at Mishustin rose high temperature. The head of the government confirmed to the edition that he feels unhealthy.

As Mishustin caught, it is not reported.  According to a source of Vedomosti, the prime minister directly  contacted  to  some Deputy Prime Ministers and  ministers, besides in  his office technical specialists had access.

The prime minister who said that he is going to stay  in touch with  the government will be "under  observation of doctors in  one of  medical institutions",   Mishustina Boris Belyakov reported press sekretal. Mishustin intends to remain "in active contact by phone and video conference" with colleagues and the president.


The Deputy Prime Minister Andrey Belousov became the acting as the prime minister.

Mishustin addressed Russians and asked "to treat most seriously" spread of a coronavirus. He urged all to stay at home on May holidays.[3]

2003 - [4] defended the dissertation on degree of Candidate of Economic Sciences on the subject "The Mechanism of the State Tax Administration in Russia" Thesis[4].

Mikhail Mishustin was a developer of the law on the electronic digital signature.

Developed and implemented the principle of "one window".

He is married, has three sons.