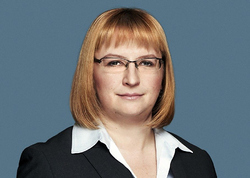 Was a supervisor on marketing and political researches, directed group of interviewers. As a result of all this activity the skill of communication with different categories of citizens was developed.

In line-up of the team of Andrey Sviridenko (who is nowadays heading Spirit company) took part in drawing up the first reference book "Who Is Who in the Computer Market of Russia".

At the beginning of 1994 began to work as the head of the Moscow office of the St. Petersburg consulting company "Alt". Here prepared several marketing researches for IBS. It is less than in a year, by the invitation of the CEO of the distribution center "Dealine" Sergey Eskin, passed to work into Dealine as the marketing director.

In 2009 held a post of the director of Novolipetsk Metallurgical Combine (NLMK) of high-quality rolled metal and a hardware, in December, 2009 became the CEO of newly created NLMK-Long Products LLC (JSC Nizhneserginsky Hardware Steel Works, Ural Plant of Precision Alloys Ltd, Berezovsky elektrometallurgichesky zavod Ltd, Kaluga Research and Production Electric Steelworks Ltd, Vtorchermet of NLMK software enterprise and some other the companies of the High-quality division managed at that time).

From 2010 to 2013 worked as the CEO of Rimera company - an oilfield service division of Chelyabinsk Tube Rolling Plant which included producers of a trubodetaly and pipeline armature — the SOT enterprise, the Magnitogorsk plant of mechanical assembly procurements, the Czech plant MSA, Alnas (the producer of electrosubmersible pumps, largest in Russia, and electric motors for oil industry), the plant on production of the oil and gas equipment Izhneftemash, Yuganskneftegazgeofizika LLC (more than 34% of the market of geophysical services KhMAO), Tomskneftegazgeofizika LLC (60% of the market of the Tomsk region), the Taymyrnefterazvedka drilling company.

On October 7, 2019 Olga Naumova became the CEO of logistic company Lorus SCM which major shareholder is the chairman of the board of directors Sollers and the main owner of this company Vadim Shvetsov. The press service Sollers reported about it.

Naumova will manage Vadim Shvetsov's investments in other logistic businesses, including Pasifik Lodzhistik and New Logistic Company. Its tasks include development and implementation of the consolidated strategy of development for logistic assets and also creation and start of logistics services based on own digital platforms.

Shvetsov said that Olga Naumova will manage development of logistic business as the partner, and with appointment to the post of the CEO of Lorus SCM she will receive an equity interest of the company.

Naumova Sollers will also hold the deputy director general post. It becomes for the purpose of implementation of synergies in further development and creation of digital platforms of Lorus SCM company and the Sollers group. In the status of the deputy director general Naumov will participate in development of new strategy of group as integrator of services of "smart mobility" and in start of new projects Sollers in this direction.

In June, 2019 Vadim Shvetsov said that the Sollers group should pass through fundamental transformation of the business model in the nearest future, from car maker having turned into the supplier of services and new digital solutions in the field of motor transportation mobility. It is a key strategic task, he noted[1].


Vadim Shvetsov notes that Naumova has not only vast experience of logistics management in retail, but also has strategic vision of development of logistics as whole complex of the innovative solutions. She got wide experience in the field of digitalization during operation in Magnet: the company carried out the digital transformation affecting all its key business processes to this period.