Previous jobs:
Special equipment and communication of NPO Ministry of Internal Affairs of the Russian Federation
Acting as head

AT Consulting (AT Group) 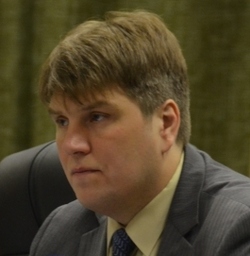 Worked in Nvision Group and AT Consulting companies where was engaged, in particular, in projects for the benefit of the Ministry of Internal Affairs.

On October 18, 2017 Andrey Nechayev was arrested, reported a number of media with reference to law enforcement agencies. According to the Kommersant newspaper, this day the staff of management "M" of FSB of Russia approached it at the international Interpolitech-2017 exhibition and took away on interrogation[1]. Searches at office and in the place of residence of the official were carried out.

On the same day the detainee was interrogated in GSU of Investigative Committee. The investigator issued the decree on involvement of the Officer-in-Charge of STIS as the suspect on criminal case the abuse of office which entailed heavy effects (Part 3 of Article 285 of the Criminal Code of the Russian Federation) is written by Kommersant. According to the petition of the investigation Basmanny Court of Moscow arrested Andrey Nechayev for two months.

According to the newspaper, the abuses connected with an information system of activity of the Ministry of Internal Affairs — a departmental hardware and software system, including several subsystems and programs are charged to Nechayev. For example, program of economic safety for the Main Directorate for Economic Safety and Counteracting Corruption. The total amount of government contracts on their creation is estimated more than at 1.5 billion rubles. According to sources Kommersant, the ministries could not keep within contractors in time, but all works were paid, otherwise in the end of the year unspent means should be returned in the budget.

Certain questions at checking and the investigations, according to newspaper sources, appeared also to the Deputy Minister of Internal Affairs Alexander Makhonov at whom Nechayev was employed in STIS. From 2012 to 2015 Makhonov headed department of IT, communication and data protection of the Ministry of Internal Affairs and was a direct curator of STIS.

The claim for 1.4 billion rubles

The claim in the amount of 1.4 billion rubles is made to the former chief of departmental NPO Spetstekhnika i svyaz Andrey Nechayev. On February 26, 2018 Kommersant with reference to the sources[2] reported about it [3].

Nechayev was responsible for project implementation on creation in the Ministry of Internal Affairs of Single information telecommunication system of law-enforcement bodies and to transition to it. According to Kommersant, according to the investigators Nechayev accepted at the contractor and paid incomplete works. He is accused of abuse of office.

According to the same source, the project on creation of Single information telecommunication system of law-enforcement bodies lasts since 2005 and all 42 billion rubles were spent for its implementation. A system was not started. The management of the Ministry of Internal Affairs made the decision on creation of more modern system of information and analytical ensuring activity - ISOD.

The management of department charged installation and debugging of ISOD to the NPO Spetstekhnika i svyaz, Kommersant reports. Andrey Nechayev who at the same time became both the chief designer of ISOD, and her customer was appointed the CEO of NGO.

In March, 2018 on the case of violations during creation of ISOD Ministry of Internal Affairs the founder and the head of AT Consulting Sergey Shilov, in April - the CEO of National Telematic Systems company Alexey Nashchekin was delayed.

August: the res nova is initiated

In August, 2018 concerning Andrey Nechayev criminal case according to Part 6 of Article 290 of the Criminal Code of the Russian Federation (taking of a bribe) was brought. It is specified in appeal resolutions of Moscow City Court, published in base of courts of Moscow in October. The decree was issued after the next attempt of protection of Alexey Nashchekin who is connected with it to the case to appeal against prolongation of house arrest. In August charges were brought to Nashchekin. Read more here.

The Investigative Committee of Russia (ICR) completed in March, 2019 investigation of high-profile criminal case about potential office abuses which were allowed during creation of the intelligent system of ensuring activity (ISEA) of the Ministry of Internal Affairs and turned back loss of 1.4 billion rub for department[4].

According to the edition, investigators refused charges of corruption to all defendants in the case including the main thing – the former CEO of NPO Ministry of Internal Affairs of the Russian Federation "Special equipment and communication" (STIS) of Andrey Nechayev who, according to the investigators, accepted ISOD at the contractor and paid for it when in a system at least three components were not ready. According to Kommersant, investigators established that Nechayev went to it to toady to the administration, but not for mercenary reasons.

Now criminal case consists of about 200 volumes, and his persons involved who are under house arrest are busy with acquaintance with it, the newspaper with reference to defenders of one of persons involved reports.

Plans to return on civil service

The former Officer-in-Charge of NPO Spetstekhnika i svyaz (STIS) of the Ministry of Internal Affairs Andrey Nechayev who was responsible for transition of police to the Single system of information and analytical ensuring activity (ISOD) of department is going to return for civil service. On May 24, 2019 the Kommersant newspaper with reference to his lawyer Vadim Myasnikov reported about it[5].

The lawyer read these plans after high-profile criminal case about abuse of office and corruption during creation of ISOD in which Nechayev appeared as one of key defendants was closed. Investigation was conducted since 2017.

Together with it defendants the founder of AT Consultingsergey Shilov and the CEO of "National telematic technologies" Alexey Nashchekin were connected to the case. Charges were dismissed from all as the investigation does not see corpus delicti in their actions any more. Shilov and Nashchekin's prosecution was stopped in April and May respectively what wrote TAdviser earlier about.

Vadim Myasnikov explained to Kommersant what within criminal case of the Ministry of Internal Affairs made earlier to Andrey Nechayev the claim for 1.4 billion rubles therefore in order to avoid a conflict of interest that was forced to leave STIS. At the same time he remained the chief designer of ISOD Ministry of Internal Affairs of the Russian Federation because of which was among defendants.


Earlier TAdviser wrote, as AT Consulting will continue work on ISOD. In April, 2019 the company won the tender for accomplishment of developmental works on development of the federal search system of genetic identification "Xenon-2" which enters the ISOD complex.