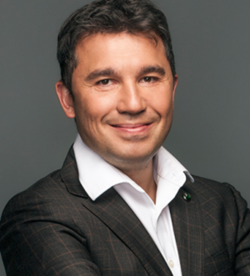 In 1996 graduated from the Tashkent electrotechnical institute of communication majoring in "Automatic telecommunication", in 2001  — Moscow State University of economy, statistics and information science in "Finance and the credit".

ABN AMRO Bank of NB, Uzbekistan of the joint-stock company", the specialist of department of financial control, the head of information technology of "JSC ABN AMRO Bank", the associate director in information technologies, the director of the department of quality management of processes and projects, the senior vice president of Alfa-Bank, the development director and to maintenance of products and transactions of the Retail Business block of Alfa-Bank worked as the system engineer of "JV AVM Kompyyuter Service", the head of department of automation ".

Held a position of the associate director of IBM East Europe/Asia LLC.

Orlovsky came to Sberbank in 2008 from IBM (he then was 34 years old). In Sberbank he became responsible for the program of IT transformation. By its recognitions, then then in bank there was no such block as[1].


Till February, 2013, being a board member of bank, supervised an IT block. In February, 2013 Orlovsky was brought by the decision of the supervisory board of Sberbank from board.

The head of the Risks block Vadim Kulik became the new IT curator at that time. The supervisory board appointed him the vice chairman of the board of bank.

In response to a question of CNews in 2013 German Gref explained the reasons of change of the curator of an IT block for those that the IT system of bank strongly expanded, and it is necessary to focus on increase in its reliability and controllability[2].


Orlovsky was a shareholder of Sberbank. Information on existence of stocks of Sberbank at it for the first time appeared in the report in 1 quarter 2011. It possessed at that time 0.0008% of ordinary shares (about 172.6 thousand pieces). Their cost according to the share price of Sberbank for December 1, 2011 on MICEX (89 rub for an action) is about 15.3 million rub[4]

In 2015 Sberbank announced the Orlovsky's transition to a position of the director of management company of venture fund of Sberbank of SBTV Fund I. In this position he had to participate in development of interaction of Sberbank with the innovation startups worldwide.

The bank created SBT Venture Fund I venture fund of $100 million and its management company SBT Venture Capital (later renamed into MoneyTime, and then into FortRoss Ventures) in 2013. In Forbes interview in January, 2018 Orlovsky told that Sberbank made this company independent as it is more difficult to corporate funds to reach the best transactions and decision making speed at them is much lower. After a while he volunteered to direct fund. Gref agreed, but provided that Orlovsky will invest personal money in the project.


As a result of about 90% of a fund is money of the State Bank, the rest — the Orlovsky and Yakov Nakhmanovich's money, the general partner of FortRoss Ventures.

In October, 2017 FortRoss Ventures announced start of SBT Venture Fund II of $75 million, until the end of the year its size should reach $200 million.

In the summer of 2016 Victor Orlovsky with the wife and five children moved to one of the cities of Silicon Valley. There he works from home office (also the fund has an office on University Avenue in Dead Alto), and makes appointment nearby — in a coffeeshop of Peet's Coffee, democratic Californian network where he with own hand orders a cappuccino at the checkout. "The elephant learns to be a unicorn" — he laughs.

In January, 2018 in Forbes interview Victor Orlovsky for the first time told about circumstances under which it left a post of the Chief information officer of Sberbank in February, 2013[5]. In Sberbank he was engaged centralization of IT systems and creation of a single platform. The uniform customer account was introduced, CRM, card issue, processing were centralized. With a back office it was much more difficult, in "a zoo of systems", according to Orlovsky, only customer bases of data there was about 75,000.


Process of changes began in 2009, and by 2013, with delay for a year, the program of centralization was implemented. It were unprecedented terms, Orlovsky considers, he estimates the five-year budget of the program at $4 billion. In passing Sberbank had an online bank, mobile bank, credit cards, CRM, call center, a data processing center, SberTech and "Sberbank service".

In five years a great job was done, but Orlovsky did not consider load of the new platform.


In 2012 in Sberbank there passed the series of large failures. On the sixth of July processing stood an hour and a half, and the whole country, including its management which Oryol had to clear up a situation on means of Special Communications and Information Service learned about it.


Gref did not begin to dismiss Orlovsky, and appointed him the senior vice president of Sberbank for digital business to whom not 15,000 employees, but two submitted any more.

Approach to work and management

In February, 2012 in an interview of CNews Victor Orlovsky so described the approach to work in Sberbank:


Every morning Victor Orlovsky tried to begin with 10-kilometer jog "in the fresh air, in any weather". Practically all IT command of Sberbank actively plays sports, he told.

Representatives of the IT companies, contractors of Sberbank, confirmed the firm schedule of a team of the Chief information officer. According to them, employees quite often just refused to work at projects in Sberbank since do not maintain a similar rhythm.


In exchange Victor Orlovsky promises that he to the person "will be what to remember and tell grandsons" and that "in several years of people which implements itself(himself) here will be able not to worry about the present and the future".

The relation to work at Orlovsky almost religious: