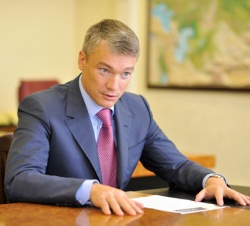 At different times Alexey Popov in a varying degree took part in development of such IT companies as:

Some market participants are sure that it remains affiliated at least with some of these companies still.

In 1996 graduated from Moscow State University, in 2006 - the Moscow institute of the international business at VAVT Ministry of Economic Development of the Russian Federation. Candidate of Physics and Mathematics.

Directed the IT companies BSS and BFT (the last entered later c IBS Group), specializing in informatization of financial institutions.

Alexey Popov's address in connection with transition to civil service:

After nearly 10 years of work from the moment of creation of the Company I made the decision on departure from the job of the CEO.

For these 10 years the Company gained the lead the Russian market in both directions of the activity - automation of remote banking and automation of bodies of the public (municipal) administration. Leadership is confirmed, on the one hand, with different researches of independent sources, constantly growing turnover of the Company (more than 8.5 million US dollars for 2003), number of clients (more than 900 banks, 12 subjects and 200 municipal entities of the Russian Federation), number of employees (more than 300), number of branches (10), on the other hand, the life - respect and recognition of merits of the Company by dear clients, partners, competitors is obvious. Moving to own comfortable office - the most serious achievement for any Company became another proof of success.

Work in the Government of the Russian Federation - as the associate director of Federal service of Federal Treasury is offered me. In a new position I will be responsible for information and technical development of a system of Federal Treasury (89 Managements, more than 2500 departments across the territory of the Russian Federation, more than 50000 employees). These are not pathos words, but on a certain moment of the development you begin to understand that to bring benefit only to clients of the Company, let and the most successful in the area, it is interesting and honourable, and to bring benefit to all Russian Federation it is interesting and honourable doubly.

The decision on departure from the job of the CEO would be never made by me if I though for a second doubted that with my leaving not only the normal company performance, but also its permanent development will be continued. Yakovlev Evgeny Igorevich is appointed the new CEO of Bank's Soft Sistems (BSS) Company (the director of the department of marketing earlier), Stefanchuk Alexander Dmitrievich is appointed the new CEO of Budget Financial Technologies (BFT) Company. All other team members remained the same, the new organizational and regular structure of BSS is given in the website, the structure of BFT did not change.

New heads guarantee you complete succession of a rate in domestic and foreign policy, complete of preserving of that atmosphere and that collective that is our main property.

It was personally exclusively pleasant and interesting to me to work with you. I hope that in the new position I will be able to be useful to you, I will be always glad to any contacts with you.

On public service arrived in 2004 to a position of the associate director of Department - Head department of Federal Treasury of the Ministry of Finance of the Russian Federation.

Since January, 2005 it is appointed the deputy manager of Federal Treasury.

On February 28, 2011 it is appointed the director of the department of information technologies and communications of the Government of the Russian Federation. The key project which it supervised in this position was SIEI – the system of interdepartmental electronic interaction. It had to integrate all federal and regional structures of the power for the purpose of data exchange and save citizens from need of providing information in state structures if this or that department can obtain this information independently at the colleagues.

The federal segment SIEI was started at the end of 2011. Regional segments had to earn by July 1, 2012 (but it did not occur). From this date the new order of interaction of officials and citizens found law force.

"I left since yesterday at own will, - he told CNews. According to him, to tell about reasons for leaving not time yet. "While in state structures I am not going to work", - he[1] added[1]. Popov's deputy Vladislav Fedulov was appointed the acting as the director of IT department.

On September 22, 2011 presentation at the conference of CNews

On August 6, 2012 TAdviser published the message that in August-September, 2012 Alexey Popov can be appointed by chapter of "UEC".

On August 15, 2012 Alexey Popov confirmed to CNews that he conducts negotiations on employment on a post of the president of "UEC". The offer, according to him, arrived from shareholders of the company. The final decision will be made not earlier than September, he added.

Speaking about development plans for the company Popov emphasized that his point of view did not change in comparison with that to which he adhered, working in the government:

"First, it is necessary to simplify for citizens of the procedure, connected with issue and the circulation of maps. For this purpose absolutely precisely in 2012 it is necessary to combine efforts of authorized organization and Sberbank. Secondly, to consider a question of active attraction of a large number of banks. For observance of their interests it is necessary to consider the possibility of use of different payment systems. At last, the card is not necessary if there are no services which can be received according to it. UEC means it has to be built in the project of electronic state services, and, perhaps and to act as a leader of this direction" [1].

Also the Popov's position of the chips which are rather built in the card is interesting. "The domestic chip – it is good, but the main thing – to provide the competition, - he considers. - The reserve on reduction in cost of cards at the expense of it is not exhausted yet".

One of interlocutors of CNews connects possible replacement of the leadership of UEK company with discontent with the course of the draft of chapter "Sberbank" German Gref. The bank is the controlling shareholder of JSC UEK.

"Initially UEC thought for promotion of a payment system of Sberbank of PRO100, - he says. – However the federal authorized organization excessively was fond of formulation of rules of accession of banks, certification of authorized organizations in subjects and was engaged directly in functionality insufficiently".

Official appointment of Popov the president of UEC took place on September 24, 2012. Earlier the adviser to the president of Sberbank Anna Katamadze became the vice president and the chief executive of this organization.

It was planned that issue of electronic cards will begin since January 1, 2013 and will end in 2015 with their replacement by electronic passports. At a press conference of the company within the International investment forum "Sochi-2012" Alexey Popov said that since January 1, 2013 he universal electronic cards will be issued according to petitions from citizens in all subjects of the Russian Federation. According to him, the Government of the Russian Federation accurately gave the answer that no postponement will exist any more.

Alexey Popov hoped that in five years of universal electronic cards he will not become as simultaneous existence of the electronic map and electronic passport which will be issued in 2015 it is senseless. "But costs for release of these universal electronic cards are not senseless - turnover of these cards not infinite. If we let out them now, then in three years just and will be 2015. It as planned replacement, but already with the approved technology", - he emphasized in communication with journalists.

Rumors about resignation from UEC and return to business

On August 13, 2015 the Kommersant newspaper with reference to anonymous sources reported that Alexey Popov leaves both UEC, and Sberbank. The BFT company will become its new work location, according to Kommersant, with high probability, the entering IBS UEC[2].

"UEC in the form in which it exists at the moment, lost the relevance. The problem of mass distribution of the versatile payment instrument passed into the background — the analyst of QB Finance Madina Abayeva says. — Alexey Popov proved as the effective manager — both on state, and at the corporate level therefore its leaving says that there is no priority problem of development of UEC at the moment".

The interlocutor of TAdviser in BFT disproved the Popov's transition to this company. According to its information, Popov will continue to work in UEC.

The former head of UEC was engaged in speech recognition

Having left the UEK project and having left a post of the vice president of Sberbank, Alexey Popov focused on work in The Project — PIR home company which of business incubator he converted in the developer of the systems of speech recognition and verification of a voice. It advances the solutions through partners in structure of one of whom — the Swiss company Spitch — Popov in combination held a post of the CEO[3].

Data on income and property

As for close people, the official's spouse at that time had two apartments of 75 and 47.8 sq.m. and also two cars: VAZ-211440 and Volvo XC90. The only property of the daughter which was included in the declaration is an apartment, and, judging by precisely coinciding area (51.1 sq.m.), this same housing which is mentioned above in the Popov's data.

Big changes for 2011 happened in the income of family of the director of the department of the government. Last year's indicators still entirely belonged to work in Treasury.

According to Rosstat the average salary in Government Office is higher, than in Treasury. In 2011 in the first state agency this indicator was a little more than 102 thousand rubles a month, and in the second – 89.3 thousand rubles a month. By these calculations officials of both departments are among the most highly paid among the colleagues in federal state agencies.