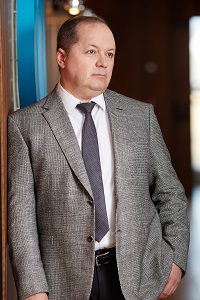 In 1986 with honors graduated from Moscow Engineering Physics Institute as "electronic engineer", has the diploma of the translator of technical literature. In 1991 completed training in a postgraduate study of MEPhI in the specialty.

Work in the banking sector of the beginnings in 1993 in Cross-industry Commercial bank MEZHKOMBANK where there passed the way from the project manager to the head of department of information technologies. Was engaged in development and support of information systems and technologies of bank.

In 1995 graduated from American Institute of Banking (New York, USA) in "Automation and the Computerization of banking".

In 1996 and 1997 studied in Financial Academy of the Russian Federation as "An economist of banking".

In 2000 passed to work into JSC Transcreditbank as the vice president — the department director, and then directorate of information technologies. Was a board member of bank, entered into Boards of Directors of subsidiary companies and subsidiary banks. Was a curator of divisions of processing; online projects and remote service.

In VTB 24 bank works since June, 2011. In October, 2011 it is appointed the senior vice president, the director of the department of banking and information technologies of VTB 24.

In January, 2020 in an interview of TAdviser the board member, the head of the IT block of Otkrytiye bank Sergey Rusanov told about what way the company in the field of digitalization goes and as it affects its business. Read more here.

In May, 2020 Sergey Rusanov in an online interview of TAdviser answered questions of transfer of 14 thousand employees to remote work. Read more here.