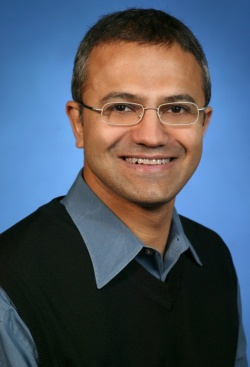 1992: The beginning of work in Microsoft

In Microsoft Nadella went to work in 1992 after short stay in Sun Microsystems. Having got a job in Microsoft, he became a program manager in department of Windows Developer Relations (cooperation with developer Windows).

On Nadella's account and his commands - development of the reference platform under the name Microsoft Cloud OS on which are based Office 365 Bing, SkyDrive, Xbox Live, Skype and Dynamics. A part of the platform are Windows Azure, Windows Server, SQL Server, Visual Studio and System Center.

The big group of key top managers among whom there was a Bob Muglia, the head of division of servers and business tools went to the period since the end of 2010 until the beginning of the 2011th of Microsoft. There is an opinion that the Muglia resignation is connected with his negative position in relation to cloud products. Satya Nadella could replace completely the veteran of Microsoft, in passing paying attention to the cloud direction.

When Nadella headed server business, Azure stood at the crossroads. The project was created in  peak to the market leader — a cloud platform of AWS started by Amazon several years before. Satya Nadella made every effort to turn Azure  into one of the world's largest services of cloud infrastructure. According to Synergy Research, revenue of Microsoft from Azure in 2013 rose by 154%.

2014: Appointment of Microsoft as the head

On February 4, 2014 Microsoft officially announced Satya Nadella appointment to a position of the CEO who was earlier holding a position of the executive vice president of division of Microsoft Cloud and Enterprise. Microsoft devoted to appointment the page on the website where it tells about continued spirit of innovations and cooperation which Satya Nadella will introduce in the company, having become its third CEO (after Bill Gates and Steve Ballmer). 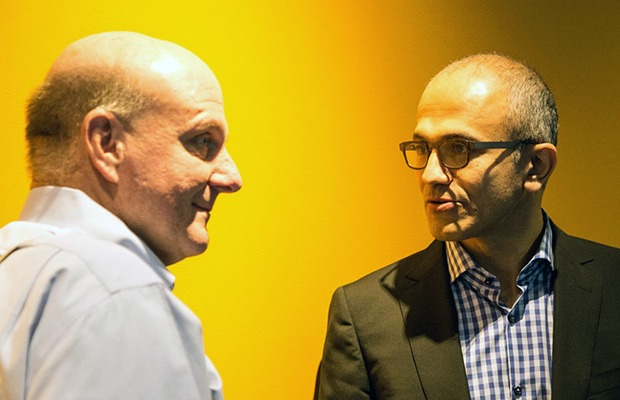 Less than for a year of the management of Microsoft Satya Nadella could recover business of the company that confirms the 25 percent growth of cost of its stocks. About the main achievements of the CEO of software giant journalists of ZDNet wrote on December 2, 2014:[1]

In the first day of stay of Nadella on the CEO's post it expressed support to the strategy of uniform Microsoft within which the company should be perceived as the producer not only software, but also different devices. Hardware business of Microsoft includes tablets, game consoles and smartphones. Besides, at Nadella the corporation began to advance actively the services and software on the competing platforms.

The former head Steve Ballmer was a marketing specialist therefore at product development in the company emphasis was placed on advertizing and external attractiveness of a product. Satya Nadella who is the technologist with work experience in producer of servers Sun Microsystems returned Microsoft to technical accent.

Satya Nadella did not react to appeals of analysts and investors to get rid of the unprofitable search system Bing. Moreover, the head of Microsoft charged to engineers and researchers to improve service and to expand its opportunities. As a result of Bing formed the basis of the mobile voice Cortana assistant and the system of speech control of video game consoles.

Satya Nadella gave "green light" to projects which were not supported by the predecessor Steve Ballmer. The Office software package for iPad which in 1.5 months from the moment of an exit was loaded by more than 27 million times, in particular, belongs to them. The head of Microsoft focused on open cross-platform innovations, especially on mobile and cloud computing that should affect business of the company positively.

2015: It is called the highest paid CEO in IT market

On June 24, 2015 it became known that Satya Nadella is almost highest paid chief executive officer (CEO) in the world. Among new heads and in IT market the income of the head of Microsoft is the greatest.

According to the data collected by observers of The Wall Street Journal in 2014 Satya Nadella earned $84.3 million of which the most part ($79.8 million) was made by payments per shares. Salary the head of Microsoft was equal to $919 thousand, different awards and bonuses — $3.6 million. 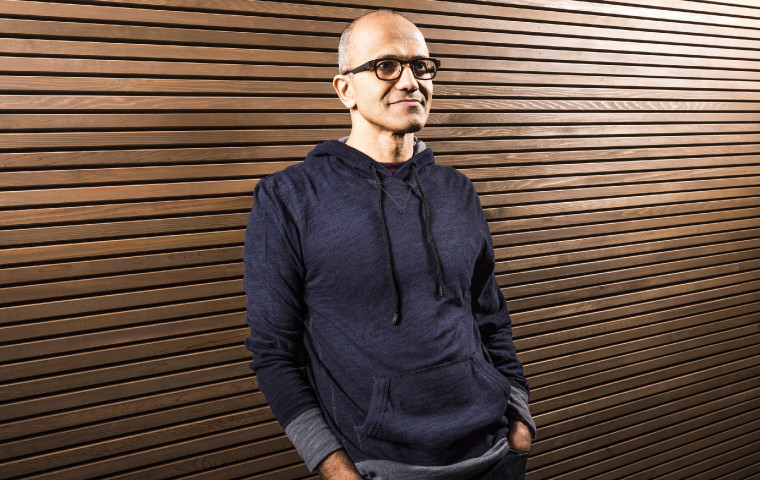 Large income of Nadella is connected with high yield for shareholders of Microsoft which in 2014 made 24.3%. At the same time in November securities of the company reached a record high of $50.04. As of June 24, 2015 the share value of Microsoft is $45.63 apiece.

The head of Liberty Global media company Michael Fries to whom the employer paid $112.2 million in 2014 is called the highest paid CEO. After this top manager and Satya Nadella there is a founder of Oracle Larry Ellison who earned $67.3 million being the head of this company.

It should be noted that income gained in 2014 was the smallest for Ellison in comparison with the previous four years. At the same time the Larry Ellison salary was only $1. Almost all earnings of the head fell on payments per shares. Profitability for shareholders of Oracle in 2014 reached 26.1%.

If to take in consideration only of new CEOs, then Satya Nadella who got up at a wheel of Microsoft at the beginning of 2014 is the leader in the size of a compensation packet in the world. The head of processor company Qualcomm Steve Mollenkopf whose annual earnings are estimated at $60.7 million according to the results of the 2014th is in the second place in the list of the most highly paid CEOs with work term on this post no more than two years. Among heads of the world IT companies Nadella is the highest paid.

Style in clothes and budget analogs

The BusinessInsider edition in May, 2018 called Satya Nadella one of the well putting most on IT heads. He gives preference to black color, Lanvin sneakers and Polo t-shirts. But it is possible to repeat appearance of the head of Microsoft for only $177.5: a t-shirt from Banana Republic shop ($64.50), trousers from thin denim ($68) and Sperry sneakers ($45). 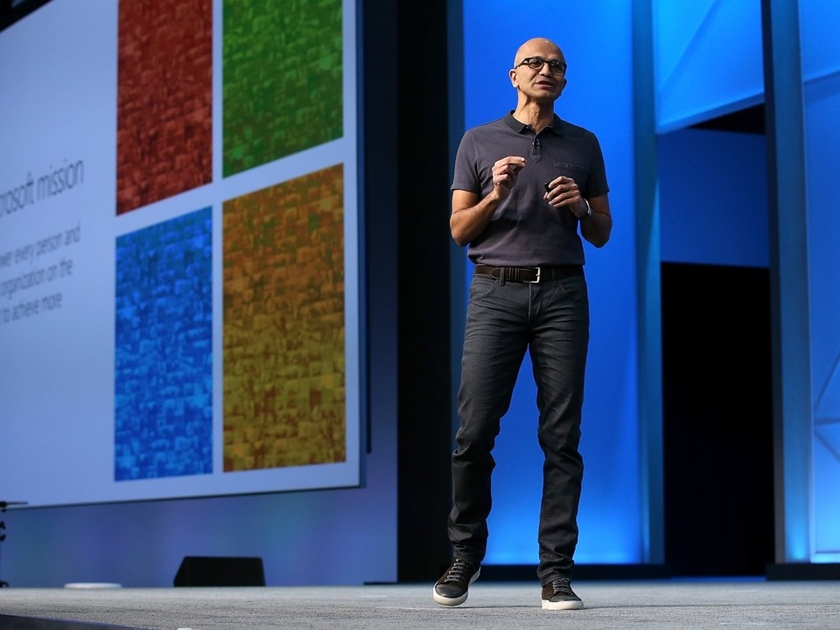 The compensation packet on a post of the head of Microsoft made $25.8 million

In October, 2018 annual earnings of Satya Nadella on a position of the CEO of Microsoft became known. For 2018 financial year which came to the end on June 30 the 2018th calendar its earnings made $25.8 million against $20 million the previous year and $17.7 million in the 2016th.

That the compensation packet of Nadella increased by 29%, reported the CRN edition with reference to the documents published on the website of the Securities Commission and exchange of the USA (SEC).

It is noted that payments to the head of Microsoft are based both on quantitative, and on qualitative indexes of a company performance. Under the leadership of Nadella the software giant showed "strong implementation of our ambitious plans concerning intellectual cloud and boundary computing in the highly competitive market". 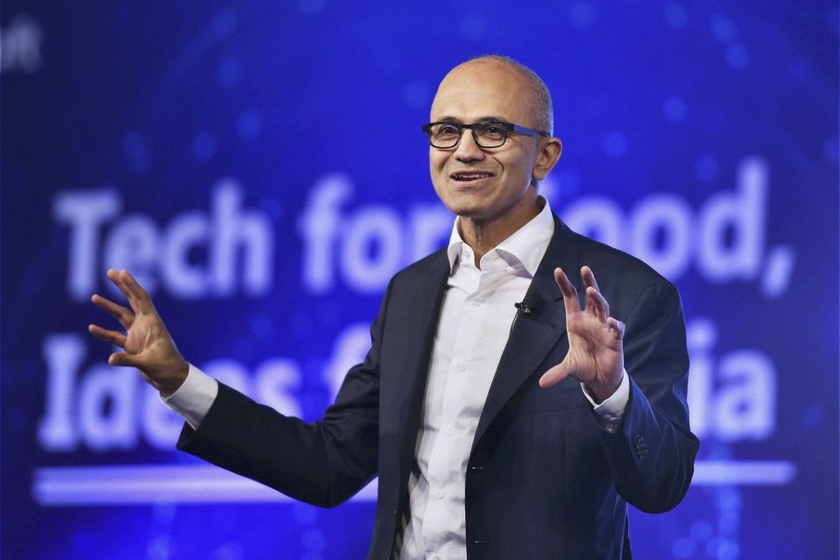 Salary in the amount of $1.5 million entered that amount which Microsoft paid Nadella according to the results of 2018 reporting year and remunerations in the form of actions for $16.8 million Besides, the cash bonus in $7.4 million was paid for accomplishment or overfulfillment of assigned tasks.

Microsoft notes that Satya Nadella's strategy on integration of LinkedIn was successfully implemented. The company took advantage of synergy and at the same time saved operational independence of business social network.

The vice president of SWC Technology company (Microsoft partner) Ric Opal in a conversation with the CRN edition reported that among the most important steps of Nadella for many years there were changes in the culture of Microsoft.


According to him, Nadella also "showed readiness for cooperation" that helped to stimulate development of partner business. However in this and another a merit not only Nadella, but also all leadership team and also all company, he added.[2]

2019: How many the head of Microsoft earned in a year. Payments grew by 66% thanks to accomplishment of the plan

On October 16, 2019 annual earnings of Satya Nadella on a post of the CEO of Microsoft became known. The company paid for the reporting three-months period which came to the end at the end of June of the 2019th calendar to the head $42.9 million that is 66% more, than the previous year. For comparison, the CEO of Apple Tim Cook earned rewards in the amount of $15.7 million, including salary in $3 million.

However it falls short of a compensation packet in 2014 to a fiscal year when Nadella headed corporation instead of Steve Ballmer and earned $84.3 million. Nevertheless payments in 2019 by 249 times exceeded an average annual wage in Microsoft ($172,512). 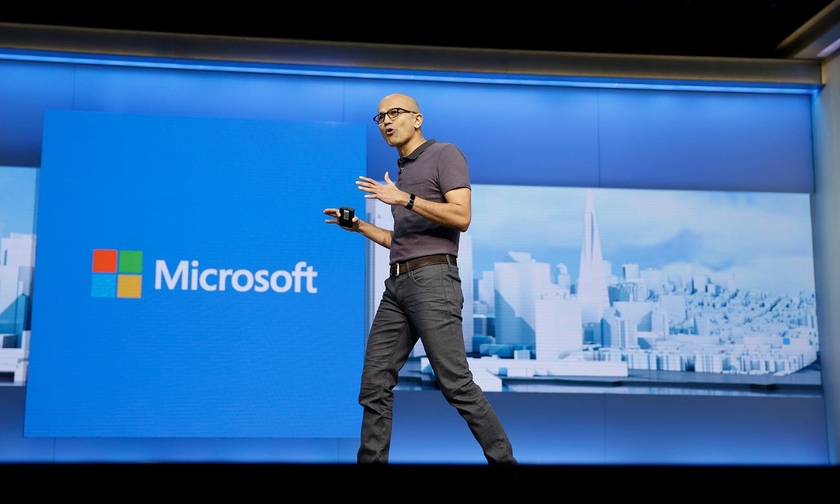 Microsoft increased payments to the CEO by 66%

The basic salary of Satya Nadella as the CEO increased from $1.5 million to $2.3 million. The most part of remuneration — $29.6 million — fell on payments per shares. $10.8 million more were issued in the form of various cash bonuses.

At the time of taking office of the CEO of Microsoft were set the tasks, had carried out which for it Nadella could expect additional bonuses. One of tasks — increase in market capitalization by $500 billion in five years and significant exceeding of profitability of shareholders over indicators of other companies from the S&P 500 index. The software giant achieved it and provided to the head additional 900 thousand actions.

By October 17, 2019 market capitalization of Microsoft makes $1.07 trillion that is the highest rate among the public companies. At Apple cost is equal to $1.06 trillion.

In 2019 reporting year Microsoft implemented the plan for revenue from corporate cloud services, to the number of active devices based on Windows 10 and attendance of social network LinkedIn. Besides, cloud business for the first time in three years was included into the three of the largest divisions of Microsoft. Ошибка цитирования Отсутствует закрывающий тег </ref>

Since 1992 Satya Nadella is married. He has three children.

The poetry and playing cricket are mentioned as his hobbies on the website of Microsoft.