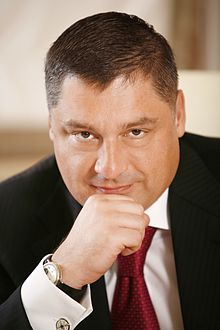 Shishkhanov Mikail Osmanovich is a president, the chairman of the board and the main owner of JSC B&N Bank (97.604%), the owner of Bashinvestbank LLC (48.37%), the CEO of BIN Industrial Financial Company Ltd, the shareholder of JSC Dekmos (49%), Inteco Ltd (95%) and Patriot Ltd, the member of council of the Association of Russian Banks and Moscow banking association, the owner of trade and office centers "Smolensk Passage" and "Petrovsky Passage", the author of two monographs and a number of articles on an economic and legal perspective.

Takes the 176th place in the rating of the Russian-language version of Forbes "The richest businessmen of Russia — 2011". The fortune Mikayla Shishkhanova is estimated in 550 million dollars[1].

Was born on August 6, 1972 in Grozny of Chechen-Ingush ASSR (nowadays Chechen Republic).

1993 - ended a bachelor degree of the Peoples' Friendship University of Russia (PFUR) in "Economy and management of national economy".

1995 - with honors ended a magistracy of faculty of economy and the right of Peoples' Friendship University of Patrice Lumumba.

1998 - defended the dissertation on a competition of scientific degree of Candidate of Law Sciences.

2002 - defended the dissertation on a competition of scientific degree of the Doctor of Economics.

2000 - graduated from Financial academy at the Government of the Russian Federation majoring in "Finance and the credit".

Now is trained in Doctoral studies of MGIMO in the field of law.

The corresponding member of the Russian Academy of Natural Sciences (RANS)[2].

1994-1995 - the head of department of interbank communications and regional representative offices, the vice chairman of the board, the vice president of JSC B&N Bank.

On December 10, 2008 - the chairman of the board of directors of Bashinvestbank LLC.

About forecasts of activity of B&N Bank

In Safmare Shishkhanov supervises foreign economic activity as the vice-chairman of Board of Directors.

At the beginning of August, 2020 ex-owners B&N Bank and "Opening" were accused of fraud for $700 million. The former owner Growth bank and the majority shareholder of Mikail Shishkhanov B&N Bank, the ex-chairman of the board "FC Otkritie" Vadim Belyaev and the major shareholder of FC Otkritie bank Evgeny Dankevich became codefendants in the claim banks "Trust" and Opening which is considered in the High Court London. In more detail here.

2012 - provided financial aid to federation of judo of Ingushetia in the amount of 3.5 million rubles[5].

Mikail Shishkhanov is the author of two monographs and a number of articles on an economic and legal perspective and also books "Scientific and Methodological Aspects of Preparation of Audit", "Property: administrative legal support of market conversions in Russia" and the dictionary reference "Management consulting".