Rosneft of the Tax Code
Vice president for information technologies 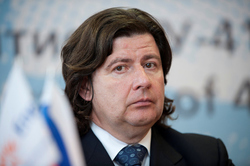 Andrey Shishkin was born was born on March 13, 1959 in Krasnoyarsk.

In 1985 graduated from Gubkin Moscow Institute of Petrochemical and Gas Industry. In 1990 completed training at the High courses of KGB of the USSR in Minsk. In 1996 got an education in Financial academy at the Government of the Russian Federation. In 2002 completed training in "MIRBIS".

Since 1992 - in financial institutions:

From 2000 to 2005 worked as the chairman of the board of Agropromcredit bank.

From 2008 to 2009 worked as the senior vice president of JSC Integrated Energy Systems (IES-Holding).

In 2014 it was elected as a member of Board of Directors of PJSC RusHydro, and in 2015 joined the board of Rosneft.

In 2016 became the vice president for power, localization and innovations of Rosneft and in the same year it was appointed the president of PJSC ANC Bashneft.

On November 8, 2019 in "the Rosneft was announced that the uniform integrated position of the vice president for informatization, innovations and localization which was occupied by Andrey Shishkin was entered into the companies.


At the same time Shishkin will continue to supervise projects of increase in energy efficiency and development of new technologies and also construction of a shipyard Star in the Far East, added in Rosneft.

The belonging Sibintek company (in more detail - according to the link) was the main IT supplier of Rosneft in 2016-2018 partially to it. For 2019 and further the similar contract was not signed.

And innovations the separate article of TAdviser is devoted to key projects of Rosneft in information technology field.