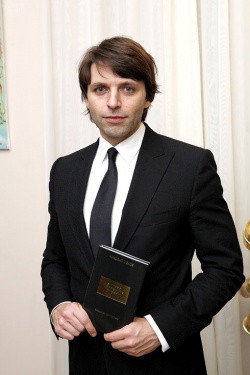 Nikolay Uskov was born on August 25, 1970 in Moscow in family of doctors. The father is psychiatrist, the employee of Institute of medicobiological problems, nowadays lives with the second wife in the USA. Mother is rheumatologist.

In high school of school Nikolay was fond of painting and was engaged at the Moscow children's art school No. 2.

In 1999, being the senior teacher of department of history of the Middle Ages of MSU, on department of history defended the dissertation on a competition of degree of the candidate of historical sciences on the subject "Monkhood and Monastic Reforms in Early Medieval Germany". Was entitled the associate professor.

In 2003 Condé Nast went to a position of the Chief Editor of the Russian version of the American magazine GQ (Gentlemen’s Quarterly) to publishing house.

In 2010 publicly called and was going to break personally posters and portraits with Stalin's image which allegedly were going to hang out on the Victory Day on May 9, 2010 the Moscow city authorities on streets of Moscow and also provoked to commission of other hooligan actions in relation to Stalin's images.

"I really leave GQ. Last year made me the proposal to head the media group "ZhV!" ("Live!") and Snob project. I did not consider correct to confirm the interest in this offer as I had to finish a number of the large anniversary projects connected with GQ", – Uskov wrote in the LJ.

"It is ambitious and interesting work – the president of domestic media group which for few years, despite severe competition of the largest international publishing houses including me as editors of GQ, achieved impressive results: changed the person of our media market, managed to attract new readers, the audience, users, to offer not banal replies to the requests of modern audience, to deserve recognition and trust of advertisers. In a word, I am intrigued", – Uskov reported, having added that he will come to a new position on February 1, 2012.

2013: Chapter of the Snob magazine

At the beginning of 2013 the group "Live!" broke up, and Uskov headed Snob.

In January, 2016 it became known that Nikolay Uskov who was earlier directing the Snob project released Elmar Murtazayev from a duty of the Chief Editor of the edition about business of Forbes Russia. It was reported that Uskov will develop the Forbes magazine, the applications Forbes Woman, Forbes Life, the website forbes.ru and the closed Forbes club.

2018: Conflict with the publisher of Forbes Alexander Fedotov

Nikolay Uskov was dismissed the Chief Editor of the Russian Forbes in June, 2018. In July he took legal action for the appeal of dismissal and expressed the intentions to try to obtain recognition illegal authority punishments and payments, including compensation of moral harm. In reply the publisher of the Russian Forbes and the owner of the ACMG group Alexander Fedotov took to court two claims against Uskov for honor and dignity protection and also about disclosure of a trade secret.

Later in August, 2018 after emergence in the edition of the new owner Nikolay Uskov returned to Forbes Russia on a position of the editorial director.

In 2001 published the monograph "Christianity and Monkhood in Western Europe of the Early Middle Ages" based on the thesis in the St. Petersburg publishing house "Aleteya".

On November 6, 2008 in Eksmo publishing house in the "Fashionable Books by the Chief Editor of the GQ Magazine Nikolay Uskov" series there was the first detective story by Uskov — "A winter collection of death. Fashion-detective".

In February, 2011 in the same publishing house there was a new detective story by Nikolay Uskov under the name "Seven Angels" continuing to tell a story of an adventure of the hero familiar to readers according to the first book — Innokenti Alyokhin, the Chief Editor of the men's magazine "Dzhentlmen".

Attribute to Uskov a neologism "a Putin glamour".

Has the blog in LiveJournal. In LJ actively uses offensive language. Has an account on social network Facebook.

He is married, brings up the son.