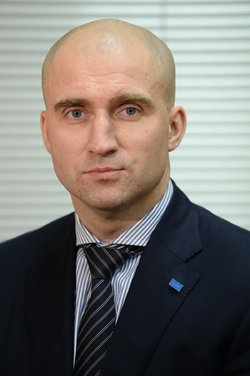 In 1997 graduated from Samara State Aerospace University of a name of the academician S.P. Korolyov

In 2000 graduated from MESI - Moscow State University of economy, statistics and information science.

"Moscow City Telephone Network" announced in October, 2012 that Andrey Yershov since October 5, 2012 held a post of the CEO of the company. On this post it was approved by Board of Directors of MGTS in August, 2012.

As the head of the company Andrey Yershov is faced by a problem of operational project implementation of construction of fiber-optical network and switching to new technologies of subscribers for the purpose of providing equal information opportunities to all Muscovites within the Information Moscow and Safe City projects. The main objective provides further development of "traditional" services – telephony, high-speed Internet access, television – and also implementation and wide circulation of new services for subscribers, such as digital security and fire signallings, video surveillance, services of telemetry and some other. Also MGTS is aimed at gain of the positions in a corporate segment through active participation in the state projects and attraction of commercial orders for communication services provision, says the company.

Departure from the job of the head of MGTS

On June 1, 2018 according to the solution of Board of Directors of PJSC MGTS accepted within the meeting on May 31, 2018 Andrey Yershov left a post of the CEO of MGTS. In this position it was replaced by Pavel Kuznetsov.


Entry into the structure of Board of Directors of MGTS

On June 22, 2018 Andrey Yershov is included by the solution of annual general shareholder meeting MGTS in the board of directors of the company.

Appointment of NVision Group as the president

On December 3, 2018 Andrey Yershov entered a position of the president of the Russian system integrator — Nvision Group company (enters into Group of MTS). The decision on appointment is made by Board of Directors of the company, reported TAdviser in NVision Group on December 3, 2018.

Andrey Yershov released Sergey Kuzmin who completed the work in NVision Group from this duty, specified TAdviser in the company.

2019: Appointment as the CEO of Technoserv

On October 15 Technoserv reported that Andrey Yershov was appointed the CEO of the company. On this post it will complete process of transformation of Technoserv and implements strategy for its output to qualitatively new level, declared in integrator. The company calculates that, having long-term experience in a telecom and IT of the industry, optimization and increase in marginality of business, management of implementation of large infrastructure projects and also direct contacts with a wide range of potential clients of Technoserv, Yershov will strengthen presence of integrator in the market in the field of implementation of strategically important projects of the IT industry.


Kulik added that Technoserv will take part in implementation of large infrastructure projects in the territory of the country and also will continue to solve problems of reference integrator and the developer for the platform of VTB.


The last work location of Yershov - NVision Group (enters into Group of MTS) where he worked as the president. According to base " circuit.focus ", at the time of the message Yershov already left from there. Since August 21 the post of the president of NVision Group is held by Sergey Gavrenkov.

The Yershov's appointment happened against the background of serious conversions in Technoserv. After purchase of a share in VTB integrator discharged of management of Technoserv of the founder of the company Alexey Ananyev with a formulation: "in view of the gross errors which brought the company to a present status".

In 2018 the company entered a new management structure, replaced management and began debt restructuring. How during this time and earlier dynamics according to government contracts of Technoserv - in a research of TAdviser changed.