Apple Watch is on sale more, than all Swiss watch combined

In 2019 it was sold to more Apple Watch, than hours from the Swiss brands combined. Such data published on February 5, 2020 in Strategy Analytics analytical company. Read more here.

Problem with fast discharge of the accumulator

On October 3, 2019 it became known that in hours of Apple Watch Series 5 the problem with fast discharge of the accumulator is detected. It can be caused by the technology intended, on the contrary, for conservation of energy. The number of complaints of users begins to grow, but Apple does not react to them yet. The reason can appear in watchOS 6 firmware – Apple has an experience of release of low-quality software for the smartwatch. 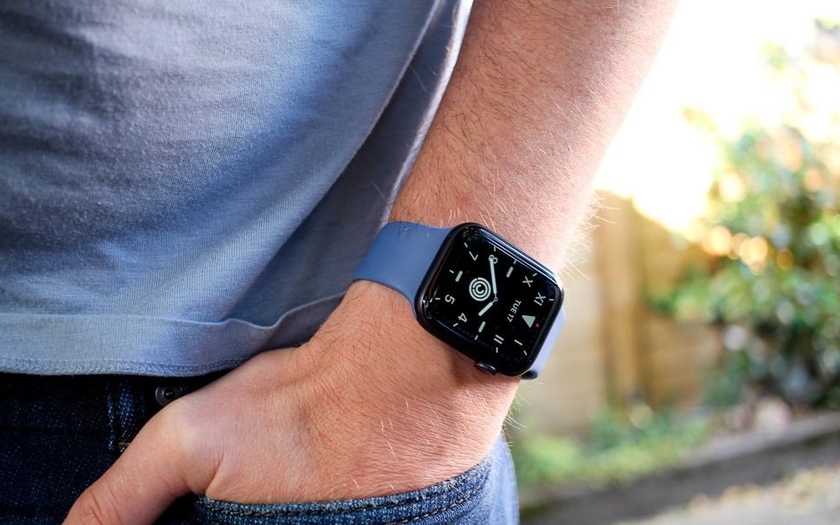 As it was reported, owners of hours of Apple Watch Series 5 began to complain of a problem with fast discharge of the accumulator in large quantities. In certain cases hours lose up to 50% of a charge less than for an hour.

The debut of Apple Watch Series 5 took place on September 10, 2019. Their feature was the Always On Display function due to which the display is always switched on for time display, but at the same time consumes an energy minimum that, as envisioned by Apple, should reduce load of the battery.

It became possible, in particular, due to decrease in update rate of the display to 1 Hz (once per second) in the inactive mode. For demonstration of the current time of it is enough. Nevertheless, this technology became the reason of fast accumulator unloading" hours – according to the MacRumors resource, users began to discuss actively this problem and to share how quickly lose a charge of their Apple Watch Series 5.

During the presentation of hours Apple stated that at the expense of the updated technologies leveling fast power consumption the display, hours of fifth generation will work on one charge as much, how many and Watch Series 4 debuting in the fall of 2018. According to official figures, the charge should last for 18 hours of moderately active use, i.e. practically for the whole day.

One of owners of Watch Series 5 wrote at the forum MacRumors that after complete recharge its hours began to lose on average 5% of a charge, just lying on a table. He did not use them, they did not accept the notification and in general were inactive unless constantly switched on display regularly displayed time. After shutdown of corporate function of Apple the power consumption was reduced more than twice – to 1-2% per hour. It, according to the owner, appeared just at the level of his Watch Series 4 and Series 3.

Current situation with autonomy of Watch Series 5 can be connected not with hours and not with their supply system, and with a program component – a firmware of watchOS 6 which Apple released in September, 2019. Confirmation to it is the fact that under comments of owners of Watch Series 5 on bad autonomy there were answers of those who use hours of the fourth and third generations in which there is no Always On Display mode.

According to them, after a software update of the hours the battery power expense significantly grew to watchOS 6, besides right after installation of an update that excludes possible problems from joint stock bank. Practically all users mention version 6.0 watchOS firmware, and at the time of the publication of material only one of participants of discussion noted that it has no problems with it.

However, according to him, at the o'clock he delivered version 6.0.1 which appeared on September 30, 2019, 10 days later from start of sales of Watch Series 5 and release of watchOS 6.0. The patch prepared by Apple contains insignificant number of improvements and can quite correct a problem with the accumulator though it does not mention in the description of updating of Apple.

Apple opened on October 2, 2019 for developers access to the second beta of a firmware of watchOS 6.1 (the first beta left on September 23, 2019). Details about the changes and innovations which are contained in it for October, 2019 were not, and the chance remains so far that with an exit of its stable release of Apple will announce elimination of a defect with leakage of battery power of Watch Series 5.[1]

On September 10, 2019 the presentation of the Apple Watch 5 Series smartwatch took place. The active Retina display became one of the most remarkable innovations always: it constantly displays time and other information, and users do not need to raise a wrist or to concern the screen. At the same time the wearable gadget is capable to work 18 hours without recharge. Read more here.

Listened to users of iPhone through a hole in Apple Watch

On July 10, 2019 Apple blocked function of the radio set in Apple Watch through which as it became clear, it was possible to wiretap someone else's iPhones without the knowledge of users. Read more here.

On October 18, 2018 the Apple corporation signed the partnership agreement with Zimmer Biomet to use corporate hours of Apple Watch for rehabilitation of the patients who transferred replacement of a coxofemoral or knee joint. Read more here.

On September 12, 2018 the Apple company provided fourth generation of the wrist computerized hours. The American producer claims that it is about the largest updating of Apple Watch in three years. Read more here.

In March, 2018 the cofounder and the CEO of Frederique Constant Peter Stas wrote the message in which expressed a concern to the growing threat of Apple Watch for the Swiss producers of traditional hours in the blog. Read more here.

At the beginning of February, 2018 it became known of a record of Apple in 2017 in the world market of the smartwatch. According to data of Canalys analytical company, the American corporation sold more than 18 million Apple Watch smartwatch, having improved the achievement of 2016 for 54%.

Specialists note that nearly a half of the range of Apple Watch of 2017 (if precisely - 48%) was occupied by the newest version of the Series 3 smartwatch which deliveries were close to 9 million pieces. 52% from cumulative the volume of shipments fell to the share of the previous modifications, including Series 2 and earlier versions. 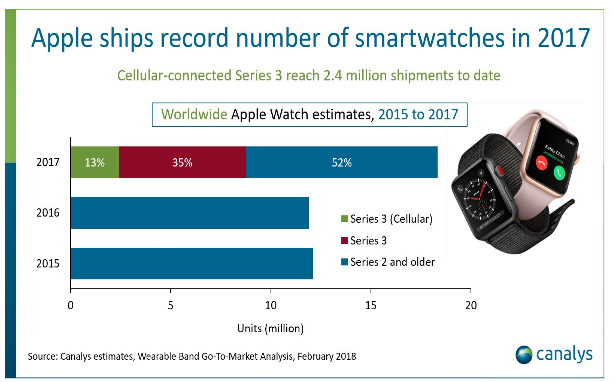 Record sales of Apple Watch in 2017, data of Canalys

Among Apple Watch Series 3 models without a possibility of cellular communication were in great demand: there was enough support of Wi-fi and GPS 35% of buyers while 13% preferred the most advanced version with support of LTE. The most high demand on LTE models was observed in the USA, Japan and Australia.

The senior analyst of Canalys Jason Low called Apple the winner in the market of wearable electronics, having noted that the rate on users of iPhone helped to achieve success of the company. Calculation was correct, and Apple shot ahead, having left far behind other vendors which tried to attract buyers with the innovation smartwatch with round dials and rotating bezely.[2]

The MacRumors edition notes that data of Canalys on deliveries of Apple Watch in 2017 almost matched estimates of other experts monitoring "apple" products. In particular, the analyst of Creative Strategies Ben Bajarin counted that Apple produced 17.4 million smartwatch, and his colleague from Asymco Horace Dediu assumed annual volume in 17.7 million devices.[3]