In the middle of May, 2020 the Central party school of China which is engaged in training of officials of the Communist Party of the country published the new book about cryptocurrencies.

China aims to head technology vanguard and, undoubtedly, realizes that the blockchain and digital currency will have an indisputable impact on economy and society. The purpose of the government consists in studying these technologies and to rethink a world currency system of tomorrow and also to train new generation of officials of China in the address with cryptocurrencies. 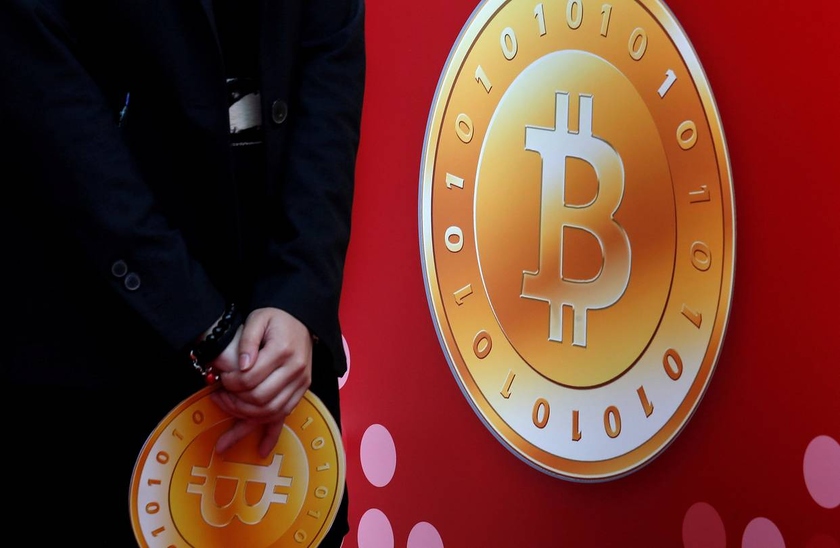 In the book the nature and the future of digital currencies is considered. Authors goes deep into origin and history of cryptocurrencies of rather legal statuses operating in the country. Besides, they also explore adjacent areas, including exchange of cryptocurrencies, primary placement of coins (ICO), stable coins and so on.

The edition also carries out contrastive analysis of multidimensional discussions and theories, considers system and practical approach and also investigates the risks connected with different types of digital currencies and the proposed normative solutions.

Authors of the book devoted separate chapter to digital yuan which release supports the state. They are in detail opisl its origin, value and impact which it will have on a payment system. Besides, experts carried out the comprehensive analysis of what distinguishes CBDC in China from other stable coins, such as Libra of Facebook company. At the same time authors in detail stopped on a negative impact of the Libra project on monetary sovereignty of China.[1]

In May, 2020 it became known that begin to pay the Chinese officials salary in digital currency within the national experiment on development of digital yuan.

Part of April salaries will be paid to government employees in the digital currency equivalent to normal yuan — for this purpose they need to create e-wallets in special mobile application. 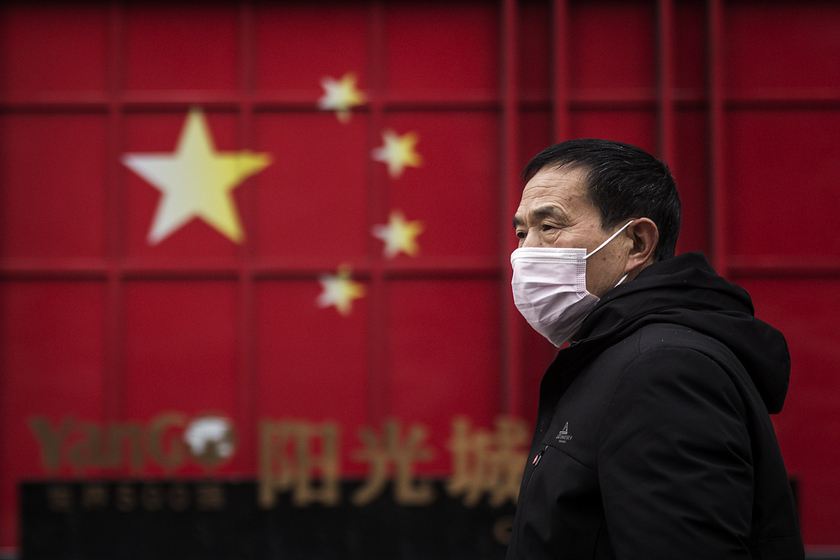 At the same time it is not reported whether it will be possible to cash digital money. It is known only that they can be used for payment of trips on public transport and food.

The former president of the People's Bank of China Li Lihui, commenting on testing of digital yuan during the speech at an online conference said that this currency can replace fiat money in Celestial Empire over time. According to him, for this purpose the digital yuan needs the following: gain recognition of people, have lower transaction costs, sufficient economic scale and more high efficiency.

Lihui also noted that unlike local payment systems as Alipay and WeChat Pay, the virtual analog of yuan, is intended to become independent of third-party banks.

It is supposed that the digital yuan, as well as bitcoin, will be anonymous. However the Central Bank will set restrictions for frequency and the amount of anonymous transaction of each user of a virtual currency.

According to the associate professor Natsionalno-issledovatelskogo instituta of development of Peking University Xu Yuan in an interview of CCTV TV company because transactions with cash are not registered in a digital form, and data on transfers from the existing payment platforms are separated, the central bank could not control cash flows in real time.

In the middle of April, 2020 it became known that the People's Bank of China began to test so-called digital yuan in several cities. It is about the CBDC project (Central Bank Digital Currency) also known as DCEP (Digital Currency/Electronic Payment).

Tests of digital currency in Celestial Empire became known from social networks where the photo in which the smartphone with the started e-wallet of DCEP developed by the People's Bank of China is represented was published. 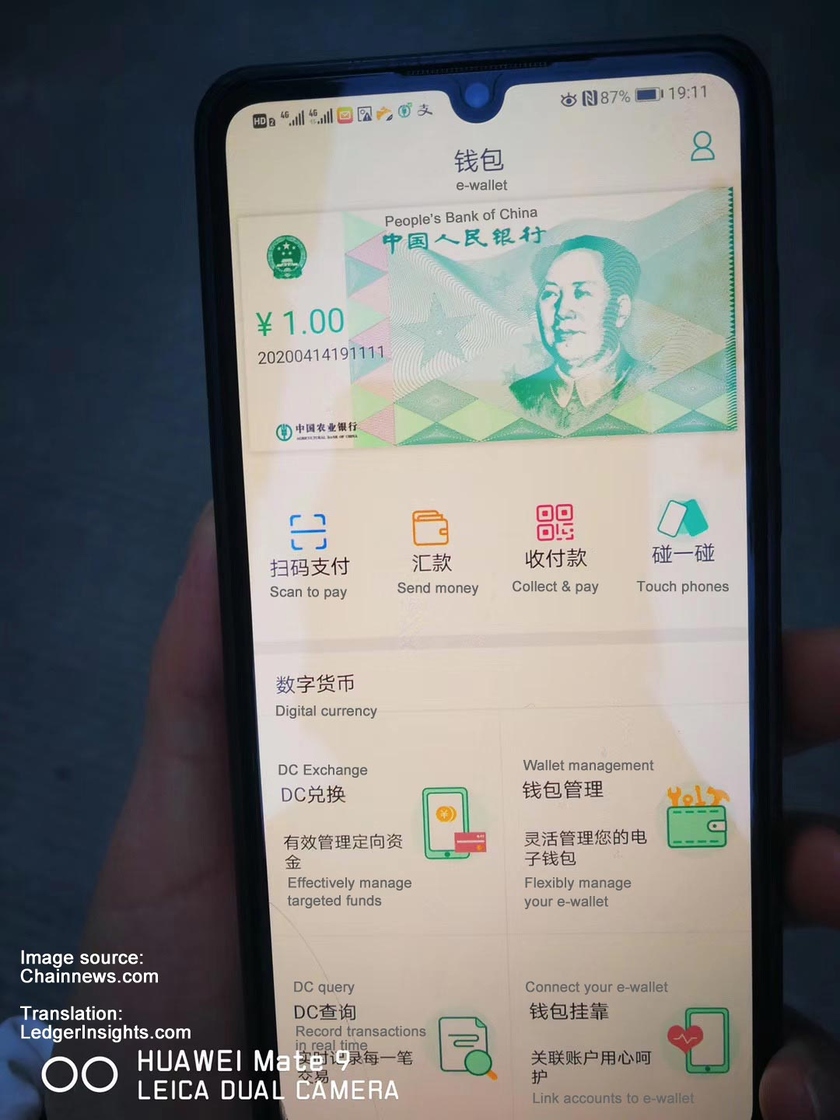 Application screenshot for the project of digital yuan

The application some time was available to downloading on mobile devices running iOS and Android, but then the link was gone. Observers of CoinDesk managed to load the program and to study its functionality.

In the application intended for digital yuan among other things it is possible to make payments in retail stores by scanning of the QR code, to transfer money, to make out bills and to carry out P2P-payments.

Users in the application can manage means, integrate a purse with other accounts and browse all transactions. It is supposed that the digital yuan will be integrated with popular payment system WeChat Pay — it is known that WeBank connected with it participates in tests of national digital currency.

Four national banks and also a number of the large companies participate in new test phase of development, including Huawei also telecommunication giants China Telecom, China Mobile and China Unicom. In total 22 companies are involved in the project. It is interesting what among them is not present Alipay — the payment system, largest in the People's Republic of China. At the same time at the company it is noticed several patents concerning digital currency of the Chinese Central Bank.

To the middle of April, 2020 the digital yuan is tested in four pilot areas: in Shenzhen, Syungana, Chengdu and Suzhou. Terms of a full-scale project startup are not called.

The Chinese authorities hope that the release of cryptocurrency will allow yuan to drive dollar out of the market of electronic payments and to undermine domination of the American currency.

The head of Sino Global Capital investment company Matthew Graham believes that U.S. authorities lost chances to become pioneers regarding development of national digital currency as Beijing is practically in a half step starting digital yuan in the mass address.

The Ledger Insights edition confirms it: it, referring to the Chinese media, writes that to the middle of April, 2020 testing of digital yuan is almost complete, and China needed only to make changes to the legislation.

File:EVlMAw6U0AAULH.jpg
Application screenshot for the project of digital yuan

DCEP in China can become the only tool for purchase of other cryptocurrencies by citizens of this country. Study of a question of liberalization of cryptocurrency trade is conducted in Beijing, and the cryptoexchanges can receive the official status for work in Celestial Empire. By April, 2020 China it is forbidden to buy-sell cryptocurrencies, at the same time  cryptocurrency mining is not prohibited, and production of such assets is the business activity referred to one of strategically important for economy of Celestial Empire.

Besides, in April, 2020 in China   the technical committee was created from 15 organizations for development of national standards for a blockchain and technology of the distributed register (DLT).[3]