On July 3, 2017 the Seiko Epson Corporation company announced the beginning of glasses sales of augmented reality of Epson Moverio BT-350 in the territory of Russia.

The product is focused on use in entertaining and cultural organizations. 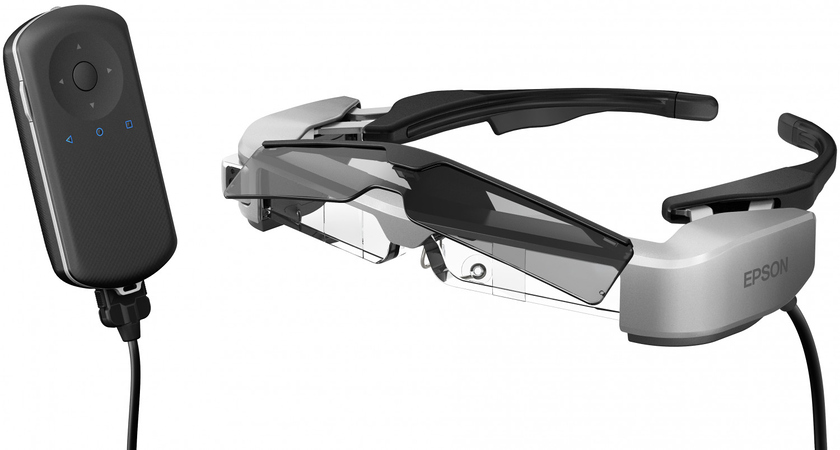 Points with the built-in microdisplays for work with applications of augmented reality are Epson Moverio BT-350. The picture in transparent displays "is imposed" over objects of the real world.

The device provides high contrast of an output of images - 100 000:1. Si-OLED display type.

Operate with Epson Moverio BT-350 on the Android 5.1 operating system, with upgradeability. Optionally the device is equipped with a docking station. It is expected simultaneous operation with five panels for loading of content and recharge.

In March, 2017 Epson showed the Moverio BT-300 augmented rReality glasses for the first time provided last fall on the Berlin IFA in Russia. Innovation belongs to third generation of Epson AR glasses, interesting feature of the device was the fact that it can be applied at control of the drone.

As you know, it is accepted to separate two main types of the realities generated by digital devices — virtual and added. "Virtual reality" (Virtual Realty, VR) represents the world which is completely generated by the computer, "augmented reality" (Augmented Realty, AR) allows to impose digital elements "over" the image of the real world. Generally it is simpler to create VR, than AR as in the first case computers should keep track of the smaller number of the parameters describing a status and provision of people around of the user of elements in the physical world, and in the second case it is necessary in a varying degree[1]. 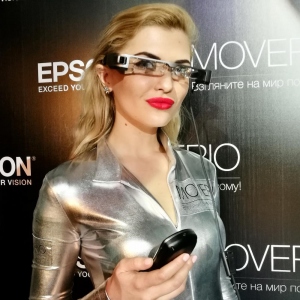 The Epson company initially created devices for augmented reality. It were the points capable to combine images from the physical and virtual worlds and also the mobile computer on the Android platform which executed necessary for this calculation and was responsible for communications with other digital devices.

It is important that Epson did not bring the systems to mass market yet and addressed the AR points which are released under the name of Moverio, to business markets in difference, for example, from Google which positioned Glass both as professional and as the user solution. However if the Google Glass project with a crash failed, then the AR systems of Epson the sixth year (the first Moverio model is produced in 2011) are applied in education, medicine, museum business and other segments.

The vendor positions BT-300 as "the easiest binocular transparent video augmented rReality glasses in the world with OLED displays". New points really have the smaller weight, than model predecessor (their weight is 69 grams, i.e. "three-hundredth" became much easier than "two-hundredth" which weighed 88 grams), it is easy and convenient to work in them. In fact, the BT-300 is the special purpose computer which is built in in AR points working under Android which received the wire remote control, the optimized interface and the app store for AR tasks.

The AR elements imposed on the image of the physical world seen to the user through points create two HD displays (everyone generates the image of 720×1280 pixels in size, it is more, than at the previous model — 640×950) constructed on corporate Epson Si-OLED technology. According to the statement of the producer, the picture created by points is equivalent to the image of the TV with forty-inch diagonal, remote from the viewer on distance 2.5 meters. The new technology applied in displays allows to achieve the improved color rendition, bigger contrast (1:100,000 that it is nearly fifty times better, than from the previous model where it made 1:230) and brightness (here the gain is not so considerable: Innovation in comparison with 1050 cd/m2 has 1200 cd/m2 at the predecessor) and also that is important, leaves completely transparent uninvolved sections of displays. Representatives of the company say that changes lift quality of AR to new level what it is possible to agree with — the picture became really essentially best of all.

Computing component of the computer quite modest to modern measures. A system is constructed on the Intel Atom platform, the quad-core processor works at frequency of 1.44 GHz. The volume of "RAM" — 2 GB, a flash memory — 16 GB, the last it is possible to expand with cards of microSD, but only with a capacity up to 32 GB inclusive. Certainly, there are GPS, the accelerometer, the light sensor, a compass and a gyroscope and also support of audio and wireless interfaces. The unpretentious camera with the five-megapixel sensor (in the previous model the camera had only a VGA sensor) and, certainly, with an opportunity to shoot video (when there is a shooting, near a lens the green signal LED burns to inform the present people that their privacy can be broken) is built in points. According to in manufacturing company, the battery life of AR points can reach 6 hours. It is visible that system configuration was selected proceeding from the principles of reasonable sufficiency.

On a system Android 5.1 with a cover which interface is optimized under control of the panel is installed. On it there are touch keys of navigation, a touch panel and the button of confirmation. The device does not locate the voice interfaces which became fashionable recently. The applications adapted for use in Epson AR glasses are available in Moverio App Market shop. Currently in this shop over one hundred and fifty applications — both paid, and free.

During the presentation representatives of the company placed a particular emphasis on the DJI Go application allowing to use points together with drones of this company. DJI Go is compatible to UAVs of the Phantom, Inspire, Matrice and Mavic series and also to the DJI Osmo system.

In AR points the pilot at the same time sees both the image from the drone camera, and the UAV (through transparent sections of points), watching flight and providing control over the aircraft. Use of AR points together with the drone is much more convenient, than there are no mobile VR helmets on which screens it is possible to broadcast images from cameras of aircraft too, but at the same time an opportunity to visually control their flight. Such solution not only is convenient for practical problems of piloting, but also that is important, meets the European requirements for unmanned aerial vehicles, in particular to the principle by which UAVs should remain in visibility limits of the pilot.

VT-300 AR glasses will be for certain demanded both by fans, and professionals using drones. The popularity of these aircraft constantly grows in recent years. Yury Artyukh, the manager on wearable devices of the Moscow representative office Epson Europe, reported that, according to the J'son & Partners Consulting agency, the market of unmanned aerial vehicles in the Russian Federation at the end of 2016 made 147 mln. dollars with a potential of growth up to 224 mln. dollars by 2020, also the intensity of use of the UAV both with entertaining, and with the professional purposes increases that, certainly, will cause powerful growth in sales of Epson AR glasses. So far the Moverio models remained niche goods for professional tasks, to almost unknown wide circles of users, but now the situation should change.

In fact, possibilities of interaction with drones bring the new Moverio model out of a commercial segment in mass that it is quite capable to increase significantly sales volumes of new points to individuals, and it does these goods by an important product for the Russian retail. 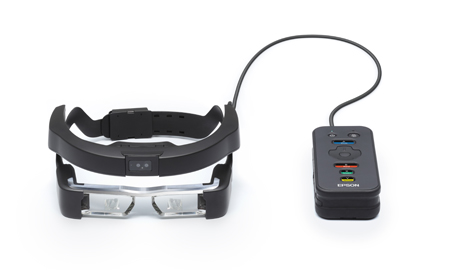 Epson Moverio Pro BT-2000 video glasses have construction, strong, wearproof and convenient for long-term use. The highly sensitive sensors which are built in Moverio Pro BT-2000 — the camera, GPS, a compass, a gyroscope, the accelerometer - allow to define with a high accuracy the user's provision in space, to fix its actions and changes of a surrounding situation.

Moverio Pro BT-2000 work on the Android operating system. Thanks to it, any corporation can create applications under the individual requirements and further update or load programs under new tasks. The flexible platform of points based on Android 4.0.4 gives unlimited opportunities for implementation of different creative and commercial intentions.

Points reproduce content in 2D and 3D the modes on the big screen with the perceived size up to 320 inches and permission of qHD (960х540) in any place and at any illumination. They also support wireless connection to networks on Wi-Fi and also connection with other devices thanks to support of Bluetooth 3.0/LE.

The built-in stereocamera with the resolution of 5 megapixels and the high-precision sensor of depth precisely determines the size and arrangement of objects by the relation to each other and easily reads out information. She allows not only to keep record of the events and to broadcast it far off, but also is capable to read out the set markers for further creation of objects of augmented reality.

Potential of such solution is limited only to imagination of software developers: specialists of the company can coordinate work of each other or provide distance learning, render services of remote service support, sending tooltip balloons, or to load the step-by-step evident guides to work with the difficult equipment. 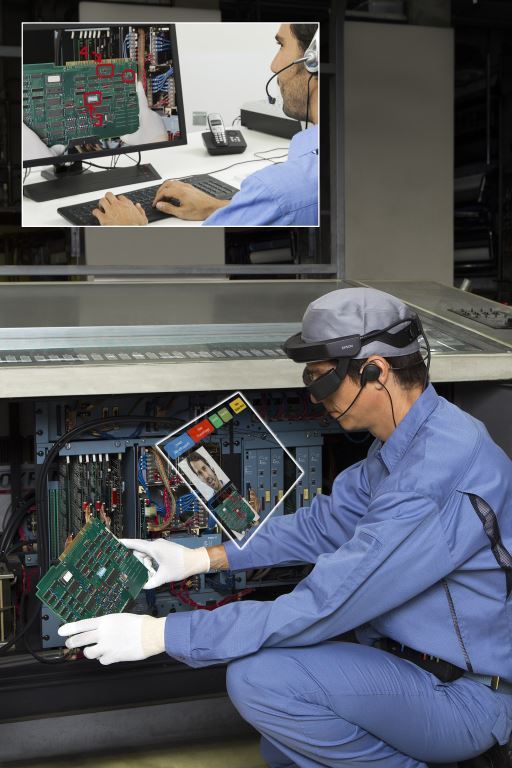 Dual-core processor 1.2GHz, 1 GB of RAM and a sound of Dolby Digital Plus provide complete immersion to the world of augmented reality. At the same time it is not necessary to worry that the device can be discharged. Video points work from two removable at the same time installed accumulators and also support function of "hot swap", i.e. it is possible to change the discharged accumulator on the run without switching off of the device. Completely the charged accumulators are capable to support work of points till 4 o'clock.

For loading of applications it is possible to use an internal memory of the device on 8 GB or in addition to install the SD memory card with a capacity up to 32 GB.

Degree a heat - and moisture securities of Epson Moverio Pro BT-2000 conforms to IP54 standard — it means that points can be used in any difficult conditions. The protective screen which goes in the delivery conforms to the standard of security ANSI Z87.1 and is capable to sustain hit of the small subject flying at great speed.