Google Glass — the computerized points developed by Google corporation. The device brings information on objects to which the user visually contacts to the special display. The transparent display which fastens on the head and is slightly above the right eye, and the camera capable to record high-quality video has the gadget.

Google Glass is the independent gadget running Android which can act as the AR headset to other device. Points were available for open sale in May, 2014, but were not in broad demand because of specifics of management and high price of the device. In January, 2015 Google announced the termination of sales of the gadget, the official site was closed and official pages of the project in social networks became empty.

In June, 2017 Google Glass glasses received the first updating of a firmware since October, 2014, and in July start of the version of Google Glass Enterprise Edition was announced.

Google Glass stopped being the espionage equipment in Russia

On July 18, 2019 the State Duma adopted the law on espionage  gadgets in the third reading. The concept of "specifics" was specified and "smart" Google Glass glasses, devices of virtual reality and so forth the equipment ceased to belong to them.

As espionage devices it began to be understood means which are specially created for reserved obtaining information without the knowledge of its owner.  Will not carry  gadgets of household purpose which can record audio and video to such equipment or to trace a geolocation and to photograph. 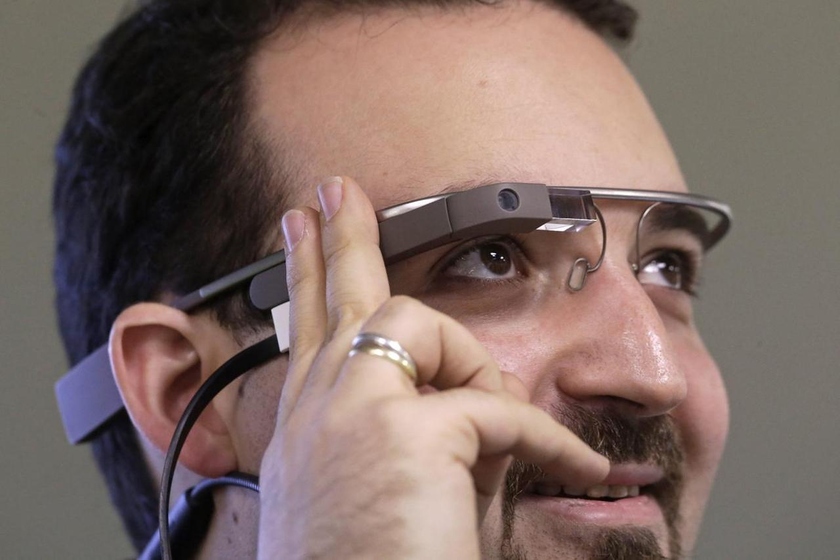 As the speaker of the State Duma Vyacheslav Volodin explained, it is, for example, about GPS trackers for search of pets, points with the video camera or other devices with the built-in video cameras.[1]

However,  on such devices controls or the marking indicating purpose of the device should be openly placed.

Amendments in  the Criminal code  of the Russian Federation and   the Code of Administrative Offences were drafted by the government. For  illegal production, acquisition and  sale of espionage gadgets by July, 2019 criminal liability with  the maximum  imprisonment for up to  four years works.

Criminal liability is provided for illegal acquisition and use "devices, systems, complexes, devices, special tools for penetration into premises and (or) on other subjects of the software for electronic computers and other electronic devices for an information access and (or) obtaining information from technical means of its storage, processing and (or) transfer which are intentionally given properties for ensuring function of the hidden obtaining information or access to it without the knowledge of its owner".

Started talking about this bill after Vladimir Putin's press conference in 2017. There discussed a situation when the Russian for himself ordered through online store from China the GPS indicator for a cow who often leaves from herd. On it opened criminal case. It came to court, but afterwards it was stopped because the citizen was not going to obtain any information secretly.

On May 20, 2019 Google provided new model of "smart" points which is expected business users. It is about Google Glass Enterprise Edition model 2 which costs $999 whereas the cost of the competing Microsoft HoloLens 2 headset begins with $3500.

Work as Google Glass Enterprise Edition 2 at a hardware platform of Qualcomm Snapdragon XR1 ensuring to the device longer independent operation in comparison with predecessors. The processor is supplied with the separate block for hardware acceleration of yneyrosetevy algorithms and also is capable to display the 4K-image with a frequency up to 60 frames per second.

Innovation received the frame developed by Smith Optics company at the expense of which it looks as normal points and is not such bulky as HoloLens. 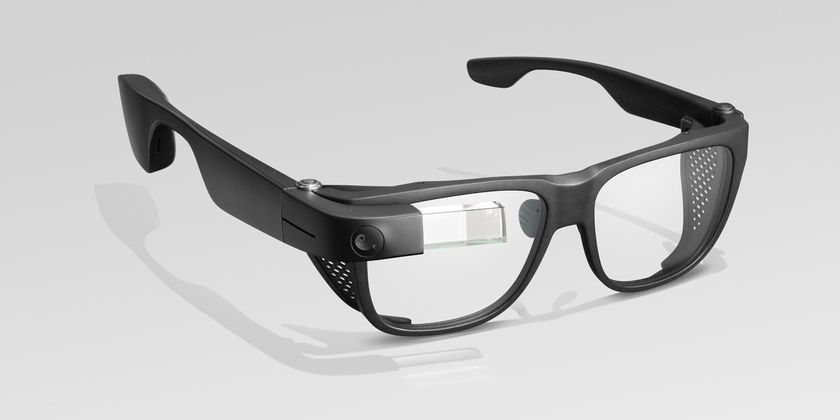 Google provided "smart" points for business which are 3.5 times cheaper, than at Microsoft

Resolution of the camera grew from 5 to 8 megapixels, but resolution capability of the display was left without changes — 640 x 360 points. The gadget is powered from the rechargeable battery with a capacity of 820 milliampere-hours which, according to developers, allows points to work 8 hours without recharge in the mode of normal operation.

On the presentation of a product it was mentioned that development of Google Glass Enterprise Edition 2 is made by forces of a command of Google, but not divisions X of Alphabet holding. Structural changes were connected with the growing demand for devices of virtual reality and need of scaling of the Glass project. A number of the large companies, including AGCO, Deutsche Post DHL Group, Sutter Health and H.B. Fuller, already showed willingness to buy smart points for the working purposes.[2]

On August 14 there was information that one of participants of the Glass for Work program which continued case of augmented rReality glasses after closing of this project for wide audience in 2015 offered slightly upgraded version of the gadget for sale.[3] 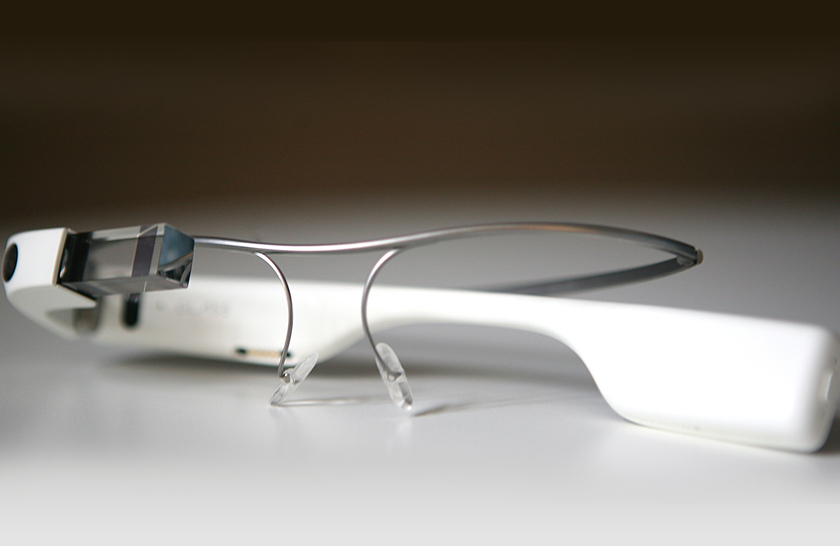 So, for €1550 users can purchase the Streye model equipped with the screen with the resolution of 640*320 pixels, several services, support of Wi-fi of 2.4 and 5 GHz, Bluetooth LE and HID, the 5-megapixel camera (allows to shoot video with the permission to 720p), 32 GB of the built-in both 2 GB of RAM and the accumulator with a capacity of 780 mAh.

The updated model works with the applications generally predraznachenny which are specially developed for it for shooting of video. However support of the Google services usual to users of the device of first generation, in the device is not implemented.

As noted, Glass EE glasses passed test for the last two years in corporate environment of more than 50 different enterprises of the USA. Thanks to positive responses, Alphabet made the decision on commercialization of the project, and now points will be available to any corporate customers through a partner network of Google. 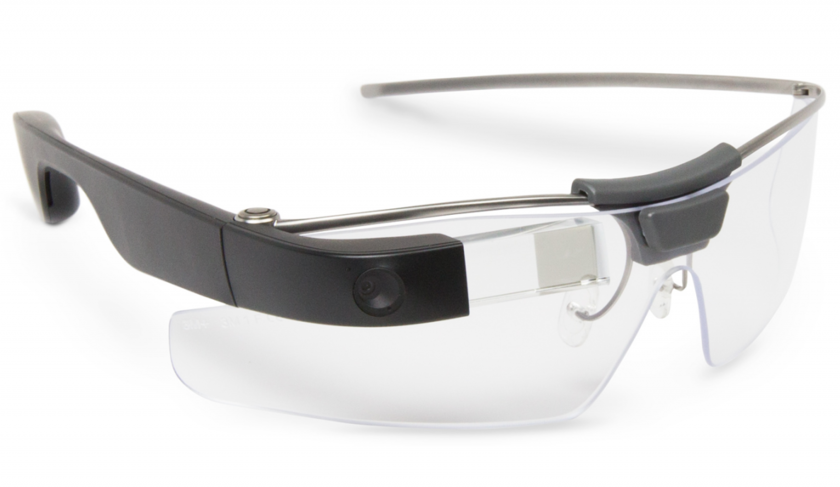 Glass EE augmented rReality glasses are still small light glasses with the built-in computer with the translucent screen on a glass of glasses, however to the design almost do not differ from normal goggles.

Glass EE transfer the image to a retina, record video and take a photo, allow to make search queries and to see results. The majority of functions is performed using voice commands. The control button is installed by the camera on the hinge of a frame and performs double function, allowing to connect far off a separate part of electronics of the device under the name Glass Pod. The device can also be used with diopter lenses.

Glass EE are positioned by the producer as the useful tool for many fields of activity, including production, logistics, field services, health care and so on. Thanks to the fact that information is displayed at the level of eyes the employee practically should not refocus a view from the broadcast content of hands and the performed work. 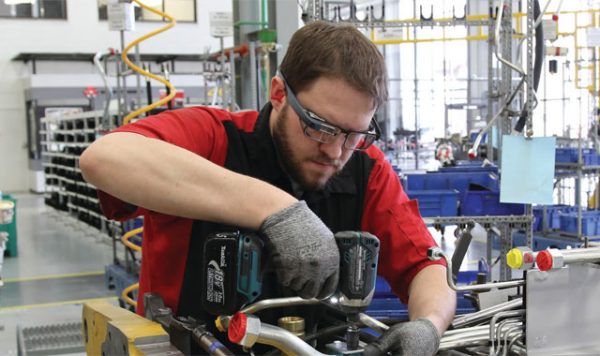 Glass EE glasses can be applied in different fields of activity

Company 3M, however in process of growth of popularity of the structure of producers is engaged in production of glass for Enterprise Edition glasses, as expected, other producers of optics and spectacle frames, for example, of Warby Parker or Ray-Ban can be among.

According to Google, earlier a number of different startups tried to adapt the household version of Google Glass for different places. Glass EE developers formalized this structure, having created an ecosystem of support of partners who buy points directly in Alphabet and work on their adaptation together with the Glass Enterprise command. It is planned that these partners will deliver for corporate clients of a complete packet of the equipment, including the hardware and the software.

augmented reality Google The Glass glasses which were considered as "the died project" received[5] in June, 2017 the first updating of a firmware since October, 2014. TechCrunch[6] reports about it][7].

Points received updating of the corporate software of XE23, there was also an updating of the application of MyGlass for mobile devices under Android. After updating installation points support connection on Bluetooth of the keyboard and a mouse. Initially owners of the AR headset were forced to use the software of other developers to connect traditional input devices, now this function is built in Google Glass firmware.

As notes[8], not up to the end it is clear, how exactly it is worth perceiving updating of a firmware after such break in work on the project — the previous update XE22 was released in October, 2014. Perhaps, the come-out updating is the firmware just long ago written, but not published. Also XE23 can be by-product of work of developers in the Glass at Work project within which other version of AR points it are provided to the Google partner organizations, but not private users.

In the middle of August, 2015 it became known of testing of Google Glass by the staff of DHL in the working purposes. It became clear that the computerized points are capable to increase efficiency of logistic transactions, process of packaging and selection of products. In more detail about it it is written here.