2020: Availability to the order

On March 25, 2020 the Hewlett Packard Enterprise (HPE) company announced that HPE Container Platform provided in November, 2019 became available to the order. HPE Container Platform is a container platform of a corporate class based on completely open system of Kubernetes intended as for the applications developed in cloud environments and for the upgraded monolithic applications, and for any environments – on servers without hypervisor, using virtual machines, in a data processing center, in any cloud or on network edge. In addition, HPE provided a set of the professional services helping to accelerate implementation of this platform and also several standard configurations for are information the capacious applications using the artificial intelligence (AI), machine and deep learning for analytics of these, boundary calculations and Internet of Things (Internet of Things, IoT).

According to the company, many companies began to implement containers for the loadings which are not requiring external data warehouses. Such tasks well are entered in the concept of cloud applicaions and easily are implemented in a format of microservices. However the majority of the business applications used for March, 2020 have a monolithic structure and work with alienable storage device subsystems. The enterprises want to upgrade these applications using containerization, having avoided at the same time loss of functionality, having saved security of industrial level and an opportunity to store data of applications on external systems. Though at some early deployments of Kubernetes in local infrastructure containers worked in virtual machines, this approach lost the relevance. Work with containers on "naked" iron creates powerful benefits for the companies wishing to update them and to scale for all enterprise. Among them overhead reduction, disposal of need to use proprietary solutions on virtualization and cutting of costs for acquisition of licenses.

HPE Container Platform allows to reduce considerably costs and to simplify processes due to work of container applications on servers without hypervisor, provides flexibility of the choice – it is possible to use virtual machines and clouds. It also gives to business the chance to use a hybrid cloud or multicloud approach at deployment of Kubernetes with simultaneous security, performance and reliability of a corporate class. The companies aiming to cut down expenses, to increase efficiency, load of servers and performance of applications will be able to get rid of virtualization and expensive licenses for a hypervisor, thanks to work of containers on "naked" iron.

Additional benefits of HPE Container Platform and work of containers on "naked" iron include:

HPE Container Platform is based on the checked developments from the companies BlueData and MapR, recently purchased HPE. So, the software of BlueData acts as the management tool as containers, and the distributed file system of MapR provides a possibility of alienable (permanent) data storage.

Work with open systems of HPE actively interacts with Cloud Native Computing Foundation and community of Kubernetes developers within a number of projects. One of such projects is KubeDirector. Being the key component HPE Container Platform, KubeDirector allows to work with not monolithic applicaions (i.e., with the applications having the permanent data warehouse) based on Kubernetes. Recent acquisition of Scytale for security in a cloud and also involvement in such projects as Secure Production Identity Framework for Everyone (SPIFFE) and SPIFFE Runtime Environment (SPIRE), emphasize the aspiration of HPE to work with open systems.

Software is the tool for deployment of containers at the enterprises, allows to solve a broad spectrum of tasks, including – implementation of containers for is information capacious applications using AI, machine and deep learning, analytics of these, boundary calculations and IoT. HPE builds the product portfolio and services so that it corresponded to loadings of this kind and also for expansion of opportunities HPE Container Platform. The offered scenarios of use include sets of the configurations optimized under workloads based on the best practices based on the infrastructure solutions HPE. Here scenarios of work of AI, machine and deep learning on the HPE Apollo servers enter; boundary calculations and IoT on the HPE Edgeline platforms; loads of DevOps and CI/CD of HPE Synergy. HPE Container Platform also works with such solutions for data storage as HPE Cloud Volumes and HPE Container Storage Interface (CSI) Driver for deployment of Kubernetes in a hybrid cloud.

Provides the updated services of HPE Pointnext expert consultations on containerization deployment, training and support. Services in design, implementation and operation of HPE Container Platform will help customers to accelerate implementation of their strategy of containerization, to reduce risks and to provide faster transition to practical use.

The software of HPE Container Platform is available to the order for March, 2020, along with consulting services, services in deployment and HPE Pointnext support.

In November, 2019 Hewlett Packard Enterprise (HPE) submitted as the company claims, the container platform of a corporate class, the first in the market, based on Kubernetes. The solution was received by the name HPE Container Platform.

It allows to accelerate development and applications launch on "naked iron" (bare-metal) without OS, in the virtualized infrastructure, in any public cloud or on network edge. At the same time developers do not need to rewrite the code for deployment of a container in different infrastructures. 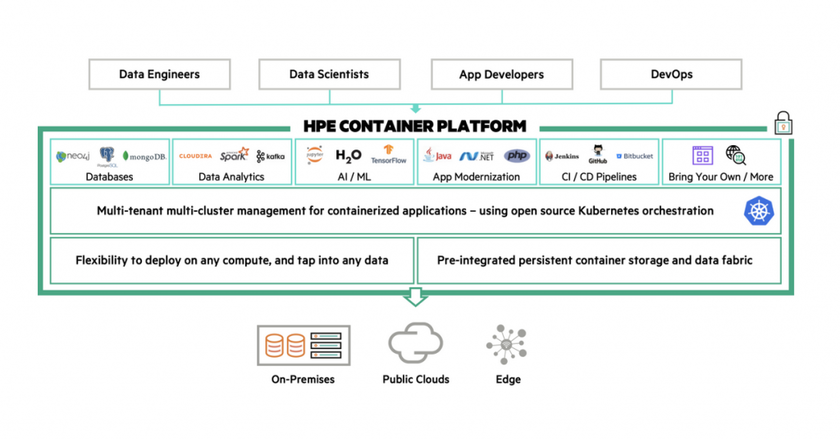 Hewlett Packard Enterprise (HPE) presented the container platform of a corporate class, the first at the market, based on Kubernetes

Innovation is constructed on technologies of the companies BlueData Software and MapR Technologies which were absorbed earlier by HPE. Thanks to these developments the platform helps the organizations to transfer outdated applications which are hard for making cloud.


Microservices are a new architecture of applications which breaks the software into modular components. The last are used only if necessary. And containers are often applied to placement of microservices.

BlueData worked with Kubernetes long before its sale by HPE, having concentrated the efforts on optimization of infrastructure for applications with preserving of a status or services which save data between sessions.

HPE stated that Container Platform provides more effective and cheaper way to updating of applications. The company gives the research IDC which showed that more than 92% of large enterprises are going to invest in containers by 2023.[1]