Intel Optane is a line of SSD carriers.

On September 6, 2019 the Raidix company announced that sharing of only 4 drives Intel Optane together with RAIDIX ERA, program RAID, allows to reach 1 million requests of input-output at the mixed load of a read and write. Comparative with solutions on NVMe SSD tests show high values of performance even when using smaller number of drives, declared in the company. Read more here.

Memory of Intel Optane can be added in addition to already available disk storage module (HDD) or slower SATA device to provide the acceleration of loading of a system or operation of the drive comparable with the SSD installation of the drive.

Thanks to the intellectual Intel Rapid Storage Technology driver working in the background, memory of Intel Optane is able to distinguish and remember content necessary for the most important or frequent tasks and provides more quick access to often used files, applications or games. 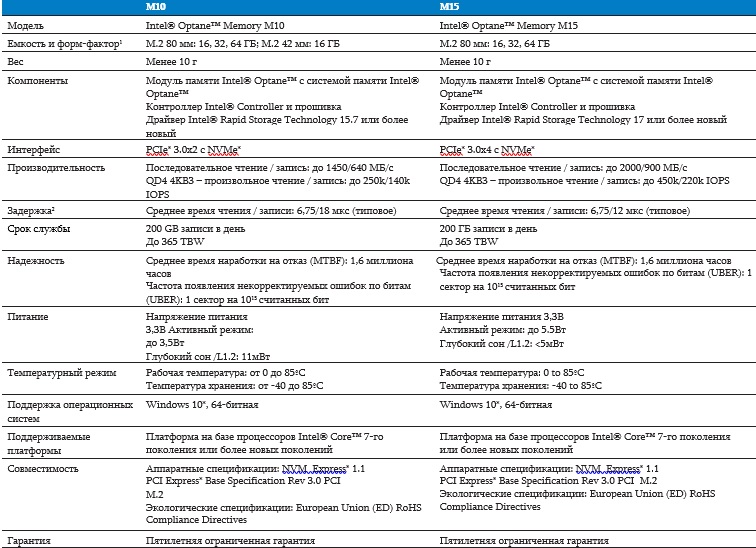 Details about the module of memory of Intel Optane H10

Intel disclosed on April 10, 2019 details about the module of memory of Intel Optane H10 with the solid state drive – the device combining in a uniform compact form factor the M.2 high speed of a response and high capacity of storage due to use of Intel Quad Level Cell (QLC) 3D NAND technology.


According to the company, the combination of Intel Optane and Intel technologies of QLC 3D NAND in uniform module M.2 allows to use memory of Intel Optane in thin and easy notebooks and also in a number of compact desktop form factors, for example, in the mini-PC and in monoblock computers. The product also provides higher level of performance, but also, saves users from need of acquisition of the additional drive.

Intel completely uses all advantages of the platform (including the software, a chipset, the processor, memory and storage) and to offer them to customers. Acceleration of work of memory and high capacity of the solid state drive provide advantages to ordinary consumers irrespective of whether they use the systems for creativity, games or for work. In comparison with the separate SSD drive based on TLC 3D NAND, the memory of Intel Optane H10 integrated with the solid state drive provides the accelerated access to the most used applications and files and also improves responsiveness of applications at other applications which are at the same time working in the background.

The mobile platforms Intel Core U-series of the 8th generation with modules of memory of Intel Optane H10 and the solid state drive from the largest OEM producers will go on sale in the spring of 2019. Platforms will provide to users the following advantages:

On January 11, 2019 the Intel corporation provided the module of memory Intel Optane Memory H10 with Solid State Storage – the solid state drive combining the speed of a response of memory of Intel Optane and high capacity of Intel of QLC 3D NAND in a uniform compact form factor of M.2. Using these technologies in the solution integrating at the same time memory and the drive, Intel Optane Memory H10 with Solid State Storage will allow to create, play and be in time, according to the developer, more, spending less time for waiting.

Combining a non-volatile memory of Intel Optane with the drive based on technology of Intel of QLC 3D NAND, this product allows to add memory of Intel Optane to ultrabooks and to other compact devices with limited physical space in the body – for example, to universal transforming devices (All-in-One) and to the mini-PC, the developer claims. The modules Intel Optane Memory H10 with Solid State Storage will be available from the second quarter 2019 in OEM systems from Dell, Lenovo, HP, Acer, ASUS and other producers.

According to information provided by the developer, the modules Intel Optane Memory H10 with Solid State Storage will be delivered in the following configurations: 16GB (Optane) + 256GB (QLC); 32GB (Optane) + 512GB (QLC); and 32GB (Optane) + 1TB (QLC). More detailed information will be available after start in the second quarter 2019.

2016: Announcement of the beginning of production SSD Optane

On June 14, 2016 it became known of plans of Intel to begin production of SSD under the Optane trademark in the IV quarter 2016. Devices are focused on consumer and business market. As a part of a line products will be provided by the code names Mansion Beach and Stony Beach.

Drives will work under the NVMe protocol and are intended for connection to the bus PCI Express 3 with four lines[1].

Approximately in the first quarter 2017 of Intel is going to release the drives Brighton Beach with support of PCI Express 3 with two lines. And not earlier than the middle of 2017 — to update Mansion Beach and to provide generation of the drives Optane for business market under the code name Carson Beach.

Carson Beach devices are going to be executed in a form factor of BGA, in addition to M.2.

In what form factor there will be consumer devices, in the presentation is not specified.

Date leak about plans Big Blya was implemented by the Taiwan edition benchlife.info at the disposal of which the internal presentation of the company got.

The drives Optane are created on the platform of technology of memory of the 3D XPoint, announced Intel together with Micron Technology in July, 2015. Partners claim what 3D XPoint обладает in 1 thousand times higher speed of work and in as much time higher endurance in comparison with a NAND flash memory everywhere used in modern electronics and by 10 times bigger density in comparison with modern computer memory.

Instead of use of transistors, in memory 3D XPoint cells from the material changing the physical properties when passing electric current применяются. Such memory is called phase memory. It is non-volatile, as well as a flash memory, but at the same time quicker than NAND memory cheaper in production, than DRAM memory which is used in OZU.