In mailing of December 19, 2018 the Magic Leap company notified buyers on the beginning of sales of prescription lenses for the Magic Leap One VR headset.

Sales of a frame of Magic Leap One worth $2300 were started in August, 2018, however search of suitable lenses remained on responsibility of the buyer. Since December magnetic lenses can be purchased in Frames Direct for $250 that is about 2.5 times more expensive than a basic pair of glasses with plastic lenses from Warby Parker.

In spite of the fact that many owners of points managed to use the VR headset, without taking off glasses, the unique design of Magic Leap One does use of points together with the device especially nekmfortny. So implementation of prescription lenses was a step forward for many developers and fans of Magic Leap who wanted to use Magic Leap One, but could not enjoy fully projected picture.

Lenses are available only to short-sighted patients whose visual acuity is in the following range: SPH-7.5 to 0, CYL: from-4 to 0 or (SPH + CYL): from-7.5 to 0. And to far-sighted buyers these lenses will not suit people with the expressed short-sightedness. Anyway, at order placement the buyer needs the existing recipe from the doctor with indication of the required force of lenses and interpupillary distance. Lenses as the company claims, will have in addition an antiblikvy covering. 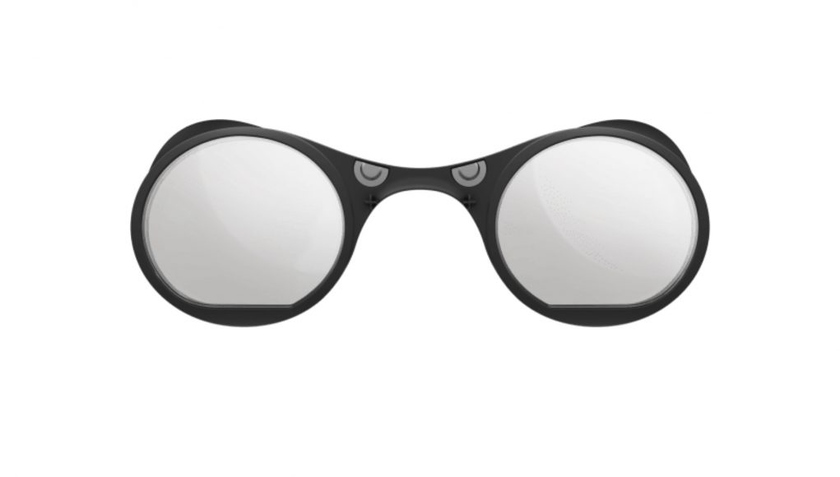 Prescription lenses for the Magic Leap One VR glasses

It should be noted that installation of lenses is very simple that they fasten on magnets and easily rise into place. It is only necessary to remove the lenses delivered with the headset and to insert new, and then to enter data from the recipe into Magic Leap One, using a way of Setup> Device> Calibration. These data are entered every time when changing lenses with normal and back.[1]

Any developer of immersive solutions always needs to have the finger on the pulse and to monitor new products. Technologies quickly develop and the appearing devices can give serious opportunities on researches and creation of commercial products in the field of VR/AR. Points (helmet) of the mixed reality of Magic Leap One (ML1) which sales started in August, 2018 became one of such devices. Magic Leap One costs $2700 and still officially is on sale only in the territory USA.

In consortium of the National Technology Initiative (NTI) of neurotechnologies, virtual and augmented reality could receive and test one of the Russia's first samples. Those features of the device which qualitatively distinguish Magic Leap One from the current solutions in the market were considered and give understanding of development of the mixed reality. The expert of the Center of NTI DVFU AR/VR Dmitry Kirillov told about results of testing of TAdviser.

In Magic Leap One developers achieved feeling of almost complete covering of direct sight of the user that it is reached thanks to a number of features of the device.

ML1 has really bigger viewing angle, about 40 degrees in horizontal direction and 30 in vertical direction (for comparison, at the Microsoft Hololens glasses which left in 2016, these indicators are about 30 and 17 degrees respectively). However this viewing angle is not enough to create feeling of connection of the complemented layer and reality. For its receiving a number of acceptances is used.

The device has the construction closing the body peripheral sight of the person that allows to limit a natural point of view of the user, and wave guides on which the picture is projected are closer to eyes. On the one hand, it allows to avoid effect of "illuminator", as in Hololens when the user accurately feels a rectangular window in which holograms are visible. With another if under Hololens it was possible to put on glasses, then with ML1 so it will not turn out any more, and it is necessary to use custom inserts with lenses which fasten in the device.

The effect of smooth leaving of the image in transparency on limits of the overview is of software at the level that is also more comfortably perceived, than in the solution of Microsoft.

All these acceptances allow to create feeling of connection of the real and virtual world. Objects are perceived entered in real space. The feeling is not created that there is some "window" through which it is necessary to look for the hologram, or this hologram is sharply cut off, and we see a real table and on it a half of a virtual mug that at once destroys feeling of communication of virtual and real objects as it often happens in Hololens.

The device is carried on two parts: Light Pack and Light Wear that it seems quite interesting solution as similar construction allowed to facilitate strongly the weight of the device, wearable on the head.

Fastening on the head is simple and convenient in use. It is enough to part fastening in directions and to put on the device the head, fastening itself will be closed to the optimal size. Such construction seems interesting, and, perhaps, will be adopted by VR producers of helmets as in due time many began to copy option of fastening Hololens and PlayStation VR. Having put on ML1 practically at once it is possible to begin to use the device comfortably. In a case with Hololens, it is often necessary to carry out a number of manipulations at putting on as the device can press on a nose or complicate the overview of holograms at the wrong provision of a vizor before eyes.

Interfere with work of a wire the connecting Light Pack and Light Wear, they enough massivna, perhaps, in the subsequent versions will make them thinner and elastic. So far it is better to shower them for a back that they did not interfere with manipulation of hands. The computing block of Light Wear rather small and not heavy, easily fastens on a pocket, but can cause inconveniences if this pocket is absent. In this case it is necessary to look for other methods of fastening or to hold the block in hand. It is important to consider that Light Wear cannot be hung up so that operation of the fan as ML1 has active cooling was limited.

In general similar approach to ergonomics and configuration of the device seems reasonable. The Light Pack block which is put on the head from a vizor is quite compact, and, looking at this device, it does not seem any more that to full-fledged AR/MR in normal points there was a lot of time. The main volume of Light Pack creates fastening, but not itself Vizor. Probably it is connected with wires which at easier fastening because of the massiveness and rigidity constantly would displace Vizor on the user's head. 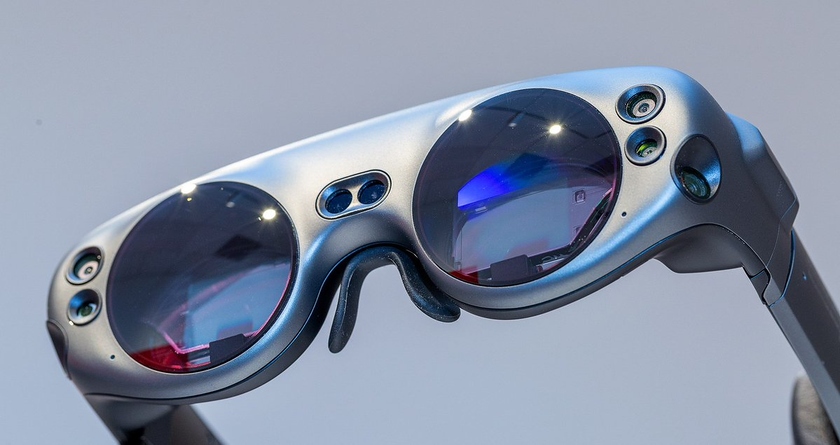 Before use of ML1 it is necessary to calibrate space. It, frankly speaking, tires a little since every time needs to be driven the head in certain points. On convenience of calibration of Hololens wins so far since in this device it occurs almost on the fly.

Tracking at ML1 is slightly worse, than at Hololens. In some cases the planes with a reflective surface are not taken. It not necessarily can be a mirror. Errors can arise because of the varnished table or a floor. So in several premises with a dark floor it was not succeeded to calibrate space.

The image quite qualitative and bright, but in the open sun it will be visible much worse, than indoors.

In spite of the fact that outside points seem strongly tinted, from within this shading is not felt. From light sources often there are aberrations and flares. Similar effects are observed also in Hololens, but they look there a little differently and arise mainly on the periphery.

One of key innovations of ML1 is a controller which understands the position in space on 6 degrees of freedom (6DoF). It allows to interact fully with virtual objects and opens really new opportunities for testing and design of the new Augmented and Mixed Reality environments of applications. Perception too quite strongly changes. - to click one business an object, another - to reset a virtual cup from a real table, having waved a hand with the controller.

The controller at the same time acts also as a pointer, it is convenient to them to take objects at distance, and the manipulator which it is possible to interact as continuation of a hand.

The controller contains several buttons and a tach-panel. In some cases at the joystick the strong drift which is most often shown near metal surfaces as the technology of magnetic tracking is used is noticeable. However in most cases the joystick behaves quite predictably. 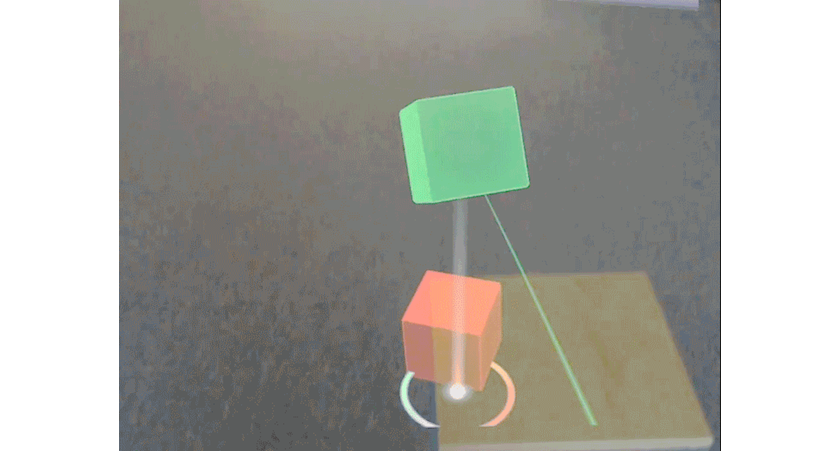 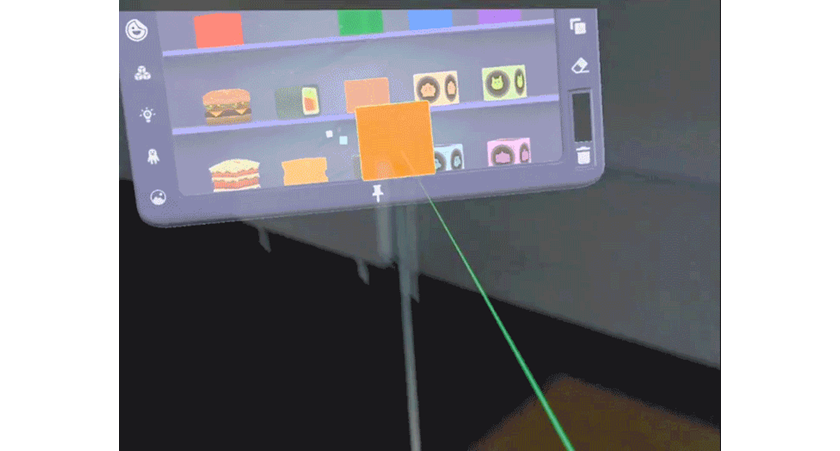 Whether it is worth purchasing Magic Leap One? If you the Virtual/Augmented/Mixed Reality developer, then unambiguously costs. ML1 gives qualitatively new level for interaction with virtual environment. It can be compared to emergence of HTC Vive when it became possible to interact with virtual objects in space with the help 6DoF joysticks. And, as we see, this trend does not cease and passes into mobile VR helmets.

Of course, ML1 yet not the user device and to apply his houses or on production still early. Powerful PR campaign added fuel to the fire too and strongly overestimated consumer expectations. Magic Leap One is not revolution, but it is unambiguously a step in the right direction for all industry of immersion technologies, for experiments and researches of use of devices of the mixed reality in different cases.

2017: Announcement of the device

On December 20, 2017 the startup of Magic Leap which by October of the 2017th attracted investments for the total amount of $1.9 billion published on the website of the company of the photo and information on the device of augmented reality (augmented reality, AR). Development of model under the name Magic Leap One Creator Edition was conducted several years in the most strict secret — the company discloses details about innovation for the first time.[2]

The set of Magic Leap One Creator Edition intended for developers consists of three devices. The first of them — Lightwear glasses with Digital Lightfield technology, six built-in cameras, high quality loudspeakers and microphones, different sensors and sensors. It is noted that the gadget supports several input modes, including voice and sign and also will recognize the movements of the head and monitors a look.

To points the wire method connects the computing module under the name Lightpack. The small block in the round body fastens to a belt and is responsible for data processing and diagrams. In an interview to the Rolling Stone portal the founder and the CEO of Magic Leap Rony Abovitz reported that he on performance of Lightpack will be comparable to MacBook Pro or the game computer of Alienware.[3]

The third element - wireless the Control controller with support of a touch control and technology of haptic feedback Haptic Feedback.

According to plans of the producer, deliveries of Magic Leap One Creator Edition should begin in 2018, however do not designate specific date in the company. Also in Magic Leap warned that continue to improve innovation therefore its appearance by the time of entry into the market can change.

Device price information in Magic Leap by December 21, 2017 is not disclosed, but earlier the people familiar with plans of the company said that the device can cost in the range from $1000 up to $1500, Business Insider tells.[4]