On March 24, 2020 DataLine reported that its data center NORD-4 underwent repeated certification of Uptime Institute, having confirmed compliance of category Tier III: Certification of Operational Sustainability, Silver. Certification of Uptime Institute Tier III: Operational Sustainability is the key standard of efficiency evaluation of management and operation of data center. Successful passing of audit confirms that in data center all necessary processes of operation are built and the qualified command works at an object. 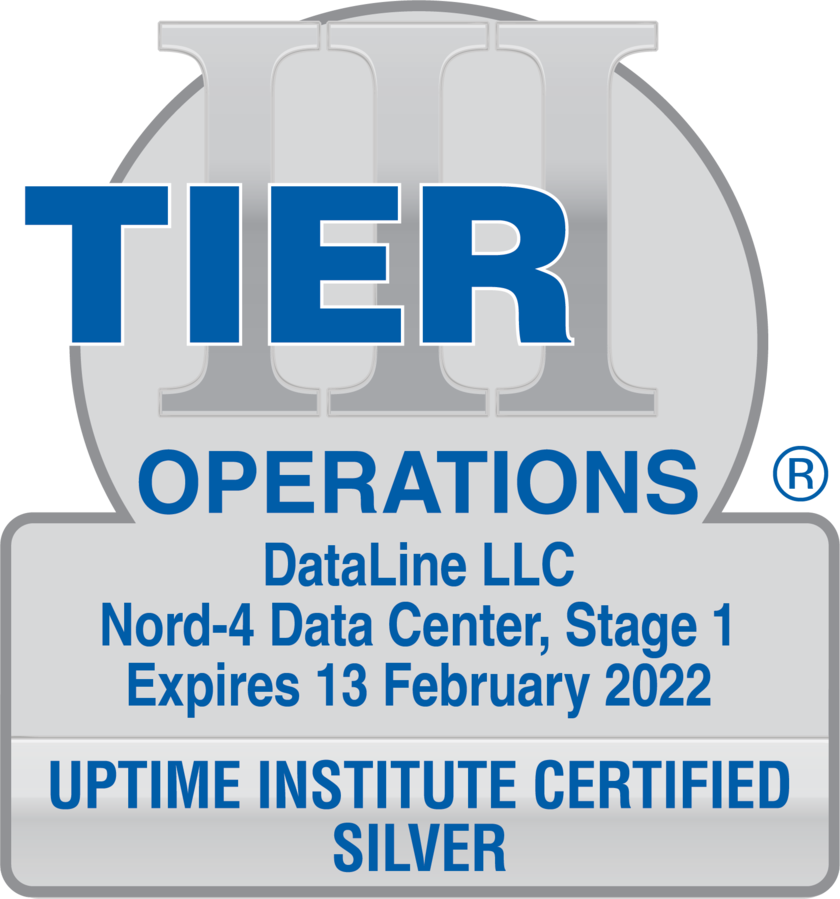 The company underwent the next audit on compliance to requirements of the international standard ISO/IEC 27001:2013. Certification was carried out on two platforms – OST and NORD. Audit was booked by the company BSI.

During annual check DataLine confirmed that the Information Security Management System (ISMS) of the company conforms to requirements of the ISO/IEC 27001:2013 standard. Audit was booked concerning the following services:

Within certification trouble-free operation of data center on three categories is checked: operation, construction characteristics and arrangement of an object. The management decisions concerning the number and personnel training and also processes of operation and maintenance of data center are estimated.

Audit of the first stage of data center of NORD-4 was booked by specialists of Uptime Institute. Checks took place within three days — from October 10 to October 12, 2017 as a result of which the module received the certificate of Tier III: Operational Sustainability, Silver level.

The certificate confirms compliance of the module to the following criteria:

The received certificate works within two years from the moment of receiving.

Construction of the cooling system

The companies of Amdtekhnologiya and DataLine in January, 2018 announced end of the 4th, final queue of construction and engineering equipping of DPC of NORD-4 on Korovinskoye Highway in Moscow. According to the results of the project the modern cooling system which total refrigerating capacity is 10.5 MW was constructed. Read more here.

Start in operation of the last power center

The DataLine company announced on December 27, 2017 commissioning of the last power center NORD-4. Now the data center is started completely. As of the end of 2017, its installed capacity is 20 thousand kVA, the quantity is resistant - places — 2016, and the total amount of data centers of DataLine is 4711 racks.

The first NORD-4 halls earned in February, 2015. The data center is designed and constructed according to the TIER III Uptime Institute standards. In June, 2015 DataLine received the certificate on the project (Design), and in March, 2016 certified the ready project (Facility). At the end of 2017 certification of processes of operation (Operational Sustainability) of the first power module NORD-4 took place.

In data center of NORD-4 backup offices for clients of the company are also located: open space, the selected jobs, meeting rooms and the dining room. Utilities, telephony and the Internet, the premises are carried out to office wing has a separate input about a reception. NORD-4 halls already have several big customers. There is an installation of the client equipment.


The third queue of data center of NORD-4

In the spring of 2017 DataLine put into operation two new halls in NORD-4 with a project capacity of 504 with firmness - places. This start the company increased volumes of the network of commercial data centers to 4207 racks.

"Step-by-step input of capacities of NORD-4 helps us to scale quickly the network of data centers, and the project with the independent power centers allows to build new queues without noises for already working machine halls, – the CEO of DataLine Yury Samoylov comments. – The fourth queue on 504 racks will be until the end of the year started".

Within certification of Uptime Institute Tier III: Constructed Facility were checked executive documentation and the equipment of the main NORD 4 engineering systems (power supply, cold supply and fuel supply) and also testing of the engineering systems of DPC for compliance to requirements to reservation is held.

During tests of the engineering systems of data center more than 30 tests were made. At the first stage the correct work of systems upon transition from city power supply to diesel generators and back was checked. At the subsequent checks critical infrastructure elements in turn were excluded from work: DGU, chillers, conditioners, sections of pipelines. For the period of tests in machine halls with the working client equipment heat guns for providing an overall load on systems power - and heat supplies, provided by the project were installed. Uninterrupted supply of fuel from storage in tanks of DGU was checked both in automatic, and in manual the modes.

In general the program of 4kh-day tests was passed in 3 days.

The second queue of data center

On December 14, 2015 the DataLine company announced commissioning of the second queue of data center of NORD 4.

The total quantity of racks in DPC network increased up to 3.7 thousand that allowed to reach the total installed capacity in 38.2 thousand kVA. Design capacity of the Romeo and Sierra halls - 500 stoykomest, the area – 1000 m ².

According to the statement of the company, for December 14, 2015 in the mode of normal operation four machine NORD 4 halls (on 1 thousand stoykomest) from eight act. It is supposed that start of the third and fourth modules will take place in 2016 - 2017.


Two halls of DPC of NORD 4 are put into operation

On March 2, 2015 announced DataLine company commissioning of the first two halls on 504 racks of data center of NORD 4.

On February 25, 2015 in the Victor and Whiskey halls equipment installation of clients began. 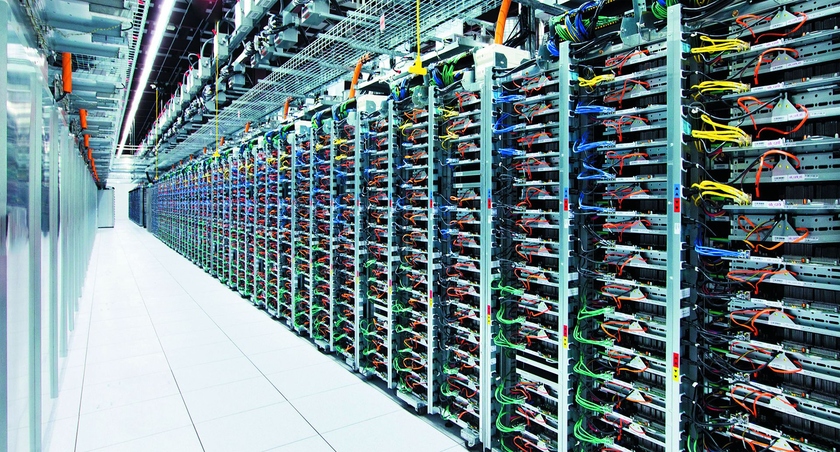 Engineering infrastructure of NORD 4 as of March 2, 2015

In new DPC, as well as in data center of OST 1, the chill cooling system is installed.

The data center of NORD 4 is designed and constructed according to TIER standards III Uptime Institute. For March 2, 2013 the official decision about certification of the project is not received. In plans DataLine certification of a ready object, operation processes, input of the 2nd queue of halls on 504 racks.

"In NORD 4 we implemented all best solutions which are saved up for our practice of design and construction of own data centers, - Yury Samoylov, the CEO of DataLine told. – It is significant, as will operate so large-scale DPC the most pilot command in the market".

According to plans of the company, in DPC it is necessary to put into operation of 8 machine halls on 2016 racks. The total area of data center will be 11.7 thousand sq.m.

On April 18, 2013 DataLine announced plans to expand DPC of NORD on Korovinskoye Highway: the company began construction of new data center of NORD 4 expected 2000 racks. The CEO of DataLine Yury Samoylov told TAdviser that in 2014 DataLine will start the first halls.

According to Samoylov, the new DPC will consist of eight halls expected placement up to 250 racks with the equipment in everyone. The company expects to start the first stage of DPC to summer of 2014, the CEO of DataLine told TAdviser.

INLINE Technologies announced in September, 2010 project completion on creation of network infrastructure for the second commercial center of data processing (CDP) of the DataLine company which is also entering into ITG holding (INLINE Technologies Group).

Network infrastructure is constructed on the equipment of Juniper Networks company.

Network infrastructure of DPC on Korovinsky is based on two-level hierarchical topology.

The top level of network hierarchy – the core module – is formed by pair of mutually reserving modular Juniper MX480 routers. Their connection to the trunk is executed through two points – one line provides connection to MMTC-9 node, another – directly to a node in DPC on Borovoy. For fault tolerance the specified lines are named on different MX480 routers.

The bottom level of hierarchy is the module of access which is created by the stack of the Juniper switches of EX4200 series working on technology of the virtual chassis – all switches are united in the uniform logic device. The fault tolerance of connection of the virtual EX4200 chassis to routers of a core is reached by duplication of connections.

The DPC on Korovinsky is connected to MPLS network of the DataLine company created on Cisco equipment. Thus, integration of technologies and the solutions Cisco and Juniper allows to speak about creation in DataLine company of multivendor network infrastructure.

Official opening of the second data center of DataLine company (Moscow, Korovinskoye Highway, 41) took place at the end of June, 2010.

On August 1, 2012 the DataLine company began construction of the building for two new halls of data center on Korovinskoye Highway. In the new three-storyed building two halls with a total area of 1460 sq.m on 400 commercial racks with average power of 6 kVA will be placed. The total installed capacity will be 4000 kVA. Commissioning of the object is scheduled for the I quarter 2013.

The DataLine company entering into ITG holding (INLINE Technologies Group) announced in September, 2012 opening in the territory of data center of Korovinskoye in the north of Moscow of the second building on 405 commercial racks of 1879 sq.m. On this object along with classical computing and telecommunication services also all range of cloud services will be provided.

The network of data centers of the company includes DPC on Borovaya St. (OST) on 583 racks and DPC on Korovinskoye (NORD) Highway on 1208 racks. Both objects are connected among themselves by the communication fiber line (CFL) to capacity of 40 Gbps. Total capacity of communication channels makes 150 Gbps, a total throughput band in the Internet - to 50 Gbps. Data centers of NORD and OST have presence points on MMTC9 and MMTC10, participate in points of exchange of traffic of MSK-IX and DATA-Ix.Setevaya infrastructure (the equipment, cable passages) is reserved by the principle 2N.

DataLine has about 300 clients. The most part in structure of services so far is occupied by service of collocation, but the share of cloud services gradually increases.

On growth rates of consumption of services of collocation occupy social networks. On the second place — the financial sector. At the same time a median number of racks on one client in the financial sector — 8 whereas in other sectors it is the share on average in 4.1 racks of one.

For 2011 four new machine halls (585 racks) are brought into operation and already in the following it is going to build two new platforms. According to perspective plans of development of the company by 2014 on the end of construction of the fourth building in the territory of DPC of Korovinskoye the total quantity of racks in data centers of DataLine will reach 3857, the area of DPC — 11,111 sq.m, and the total installed capacity — 44.6 MW. Growth of revenue of the company from 2012 to 2014 by 2.7 times is supposed.