For March 10, 2017 Jetson is the computing platform focused on producers of robots, drones, road cameras and other "smart" devices.

On May 14, 2020 the NVIDIA company provided EGX Jetson Xavier NX - the small and powerful AI supercomputer for microservers and edge AIoT-устройств equipped with a cloud program stack of EGX thanks to what it can quickly process stream data from numerous sensors of high resolution. Read more here.

At the beginning of November, 2019 Nvidia submitted the Jetson Xavier NX system which, according to the statement of the producer, is the smallest supercomputer for the solving of tasks connected with artificial intelligence. Such device allows to expand considerably possibilities of AI without increase in the size or energy consumption of the device, the press release says.

The Jetson Xavier NX supercomputer of the size of the credit card is intended for the companies specializing in robotics and the built-in computing systems. In particular, it can be useful in the cases which are requiring the increased performance, but having restrictions on the size, weight or energy consumption. 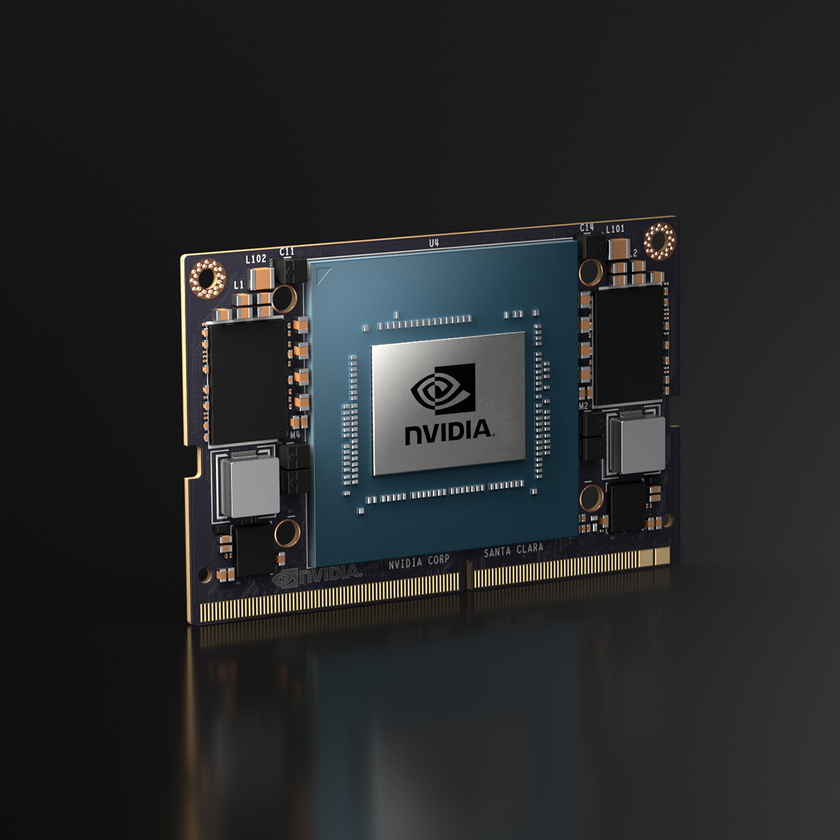 Nvidia submitted the Jetson Xavier NX system which, according to the statement of the producer, is the smallest supercomputer for the solving of tasks connected with AI

Among the potential directions of use Jetson Xavier NX the company selects robots, drones, the systems of machine vision, network video recorders, portable medical devices and other systems of Internet of Things. Despite the small size and energy consumption of 15 W, this module provides performance at the level up to 21 teraoperatsy / with (Tops).

Ensuring parallel operation with several neural networks and data processing from several sensors of high resolution, Jetson Xavier NX is capable to execute to 14 Tops at consumption of 10 W or 21 Tops at 15 W. Thanks to engineering developments of Nvidia, Jetson Xavier NX provides performance by 15 times big, than Jetson TX2 with the same energy consumption.

As well as other products Nvidia from Jetson, Jetson Xavier NX works at program architecture of CUDA-X AI and capable to work with the AI difficult networks accelerated by libraries for deep training and also machine vision, computer graphics and multimedia supports the set of development of Nvidia JetPack representing a complete program stack of artificial intelligence.[1]

The method is found to intercept management over the Nvidia supercomputers

The Nvidia company published in April, 2019 updates for Linuxfor Tegra OS based on which its unimodular Jetson TX1 and TX2 supercomputers work. Vulnerabilities in sets of drivers for these computers allowed to increase privileges in a system, to cause failures and to output information[2].

Jetson TX1 and TX2 — the special built-in purpose computers held for use in the solutions connected with artificial intelligence and machine learning.

The patch corrects in total 21 vulnerabilities, but only four of them received the index of threat higher than 8.0.

The most serious — CVE-2018-6269 — contains in the module of management of input-output (IOCTL). The error allows the potential malefactor to increase privileges, to put a system out of action (DoS) and also to get unauthorized access to information on a system and even to start any code — on condition of local access to a system.

Three other vulnerabilities — CVE-2017-6278, CVE-2018-6267 and CVE-2018-6271 — contain in different modules of a core Tegra, but in case of successful operation yield approximately same results: increase in privileges or an output of a system from operating state.

The Nvidia company announced on March 18, 2019 cooperation with Amazon company according to the Nvidia Jetson platform to allocate with artificial intelligence and deep learning millions of attached devices. This joint solution allows to create, train and optimize models on AWS and then to develop them on end devices based on Jetson using AWS IoT Greengrass. Read more here.

On March 18, 2019 the Nvidia company announced Jetson Nano - the computer with support of AI. 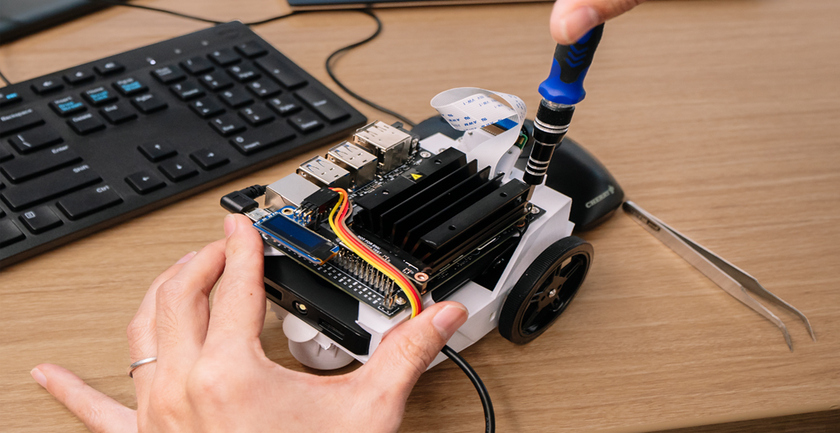 According to the producer, the small, but powerful computer for problems of AI based on CUDA-X provides performance in 472 gigaflops in modern applications for AI at energy consumption of only 5 W.

According to information for March, 2019, Jetson Nano has two modifications — set of the developer for $99 for developers and enthusiasts and the module, ready to production, for $129 for the companies aimed at creation of the ready systems for mass market.

Jetson Nano supports sensors of high resolution, is capable to process data from a set of sensors at the same time and to start several neuronets on each flow from the sensor. It also supports a set of AI frameworks, allowing developers to integrate preferable models and frameworks into a product, claim in Nvidia.

In Nvidia noted that the power of AI generally is still inaccessible for developers and pupils because standard technologies have no sufficient power and have no program AI platform. Set of Jetson Nano developer is capable to allocate with power of AI the inexpensive platform, inspiring developers, inventors and pupils. They can create AI projects which were impossible earlier: mobile robots and drones, digital assistants, automatic devices and so on. Set has support for Linux, we will combine with many peripheral devices and accessories and includes ready projects and the managements. Nvidia also supports a forum for Jetson developers where it is possible to receive answers to technical issues. 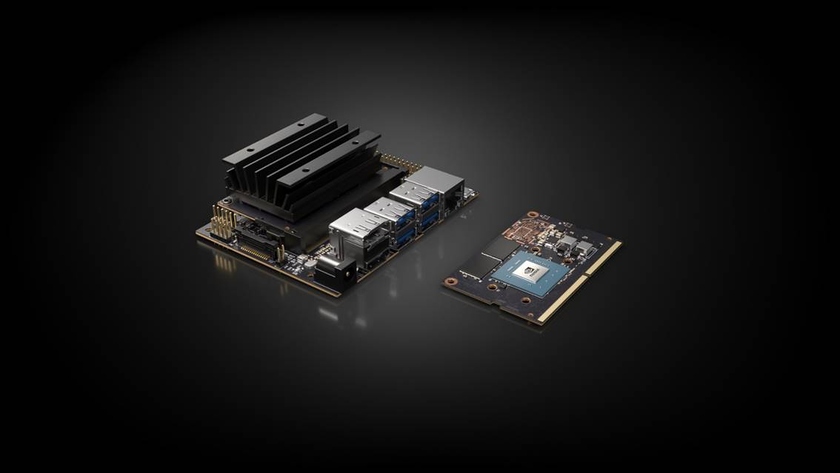 According to the statement of the developer, the module Jetson Nano opens doors for a broad spectrum of the built-in areas of application, including network video recorders, home robots and smart gateways with analytical opportunities. It allows to reduce time for development of construction, testing and check of the difficult, powerful and economic AI systems to accelerate an output of products to the market. The module has in a set power management unit, frequencies, memory and interfaces. As AI loadings are defined programmatically, the companies can increase performance and opportunities even after installation of a system.

To help clients to move problems of AI and machine learning on peripheral devices, Nvidia together with Amazon Web Services optimized work AWS Internet of Things Greengrass together with devices based on Jetson, such as Jetson Nano.


For March, 2019 the uniform program stack for all Jetson Nvidia CUDA-X family is set from more than 40 libraries, allowing modern computing applications to involve advantages of the GPU accelerated computing Nvidia platform. JetPack SDK is constructed on CUDA-X and is delivered together with complete AI a program stack with the accelerated libraries for deep learning, computer vision, processing of computer graphics and multimedia data which supports the Jetson family, emphasized in Nvidia. JetPack includes CUDA, cuDNN, TensorRT and the desktop version of Linux OS. Jetson is compatible to the Nvidia AI platform. 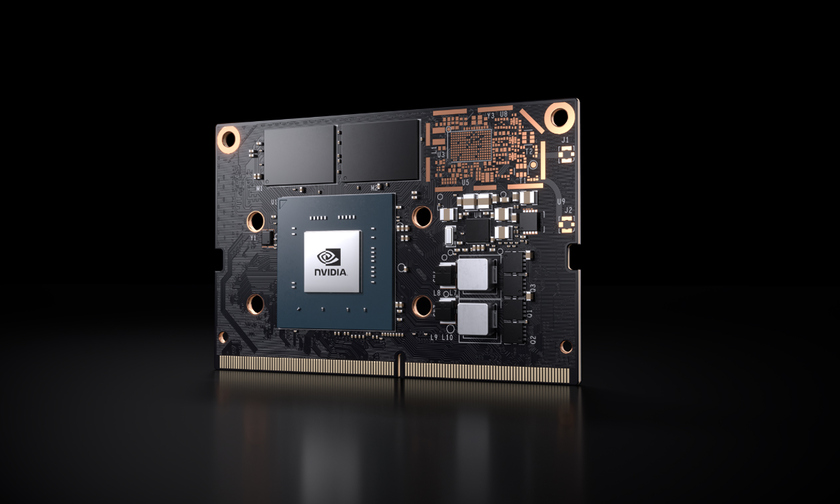 Nvidia also created the reference platform allowing to start quickly creation of AI-applications, having as much as possible reduced time for the hardware. Nvidia JetBot is a little mobile robot who it is possible to collect from conventional components. According to information for March, 2019, development is available on GitHub.

Deliveries of Nvidia Jetson Nano will begin in June, 2019.

Sales of minicomputers for robots and Jetson AGX Xavier drones

On December 14, 2018 the Nvidia company released the computing modules Jetson AGX Xavier intended for installation in the robotozirovanny systems with artificial intelligence.

The module Jetson AGX Xavier is the minicomputer for robots and drones which finds room in a palm and only 10 W - about the same as consume clock radios. It facilitates a task of developers of the pilotless systems who need to provide sufficient computing power for a full-fledged work of AI systems. The new module uses the platform of artificial intelligence Nvidia which provides base for numerous applications - a full range of tools which help developers to train and unroll neural networks quickly. 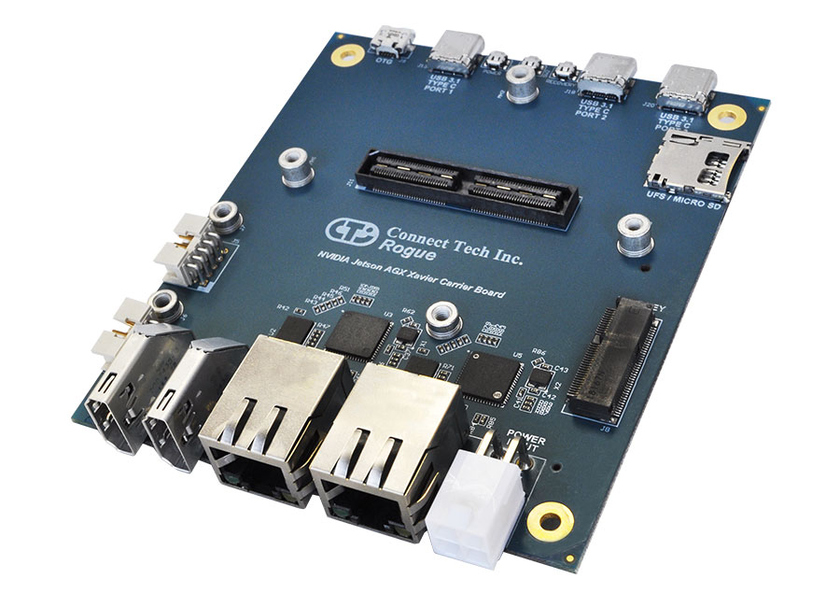 The module can solve at the same time a set of the problems focused on AI (30 trillion computing operations per second), occupying rather small space. Computing power of Jetson AGX Xavier by 20 times exceeds indicators of the previous chips of a line of Jetson. Are introduced into the module ARM- processor GPU on the platform Volta, pair of chips for self-training of a system, components machine vision and also the software for image processing and video.

It supports applications for software development of JetPack and DeepStream. They provide stream analytics, integrating AI of the pilotless robot in Internet of Things and applications for smart cities. With their help the developers can create multichamber and multitouch applications for detection and identification of different objects, such as vehicles, pedestrians and cyclists.

Modules are sold by batches on 1000 pieces at the price of $1100 for one unit. The companies which specialize in the systems of pilotless delivery using robots and drones and similar to them systems will become buyers. It is already known that Nvidia concluded the sales agreement Jetson AGX Xavier for such companies as Yamaha (for drones), Nanopore (DNA sequencing) and JD.com (for delivery drones)[3] 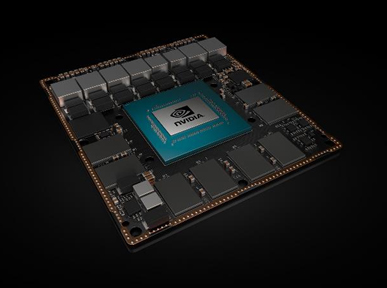 On June 4, 2018 the Nvidia company provided Jetson Xavier — the computing platform developed especially for robots. "Heart" of a system is Xavier SoC which is made by TSMC and contains 9 billion transistors.[4] provides performance in 30 TOPS (trillion operations per second), consuming at the same time only a third of energy consumption of a normal bulb, claim in the company.

The payment for developers represents a full-fledged system with cooling, the body and interfaces. For comparison, still sets for developers consisted only of a payment. With release of this Nvidia system expects to simplify development of robots.

At the heart of Jetson Xavier six types of high-performance processors — GPU Volta with tensor cores, eight-nuclear CPU ARM64, two accelerators of deep learning of NVDLA, the processor for image processing, the processor of computer vision and the processor for work with video. Such combination allows to process dozens of algorithms at the same time and in real time to process signals from sensors, to make odometry, localization and comparison to the card, to work with algorithms of computer vision and perception, to plan a route.

According to the statement of Nvidia, such performance level is necessary for robots to accept signals from sensors, to define location, to study an environment, to distinguish and predict the movement of surrounding objects, to build actions and to accurately designate the actions.

On March 10, 2017 the Nvidia company provided the second generation of the computing Jetson platform. The developer company put the main emphasis on opportunities of inclusion of AI calculation in end devices which directly interact with an environment and the user. 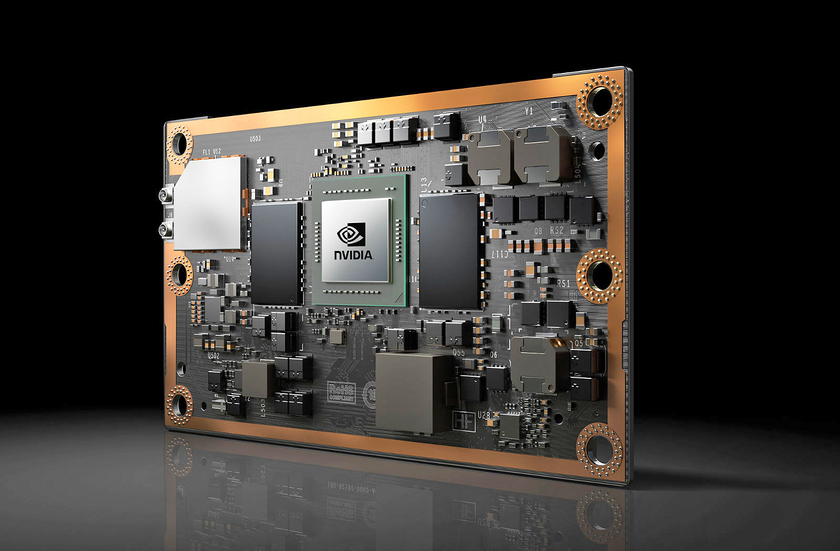 Dimensions of the device of 50×87 mm. It is equipped with 8 GB of the LPDDR4 RAM capacity of 58.3 GB / page. As a part of Jetson TX2 of 32 GB of memory eMMC, a gigabit Ethernet and wireless interfaces of Wi-fi 802.11ac and Bluetooth. A system provides a connectivity to six video cameras and processing of 4K-video on speed up to 60 personnel/page.

Together with TX2 producer announced release of the version of AI of SDK (JetPack 3.0) for family of devices based on Jetson. In it technologies for deep neural networks and machine vision are supported.

The company opened the preorder for TX2 Developer Kit in the USA and Europe. The expanded set is offered for $599, the beginning of sales is planned for March 14, 2017. The built-in TX2 platform is estimated at $399 and its deliveries will begin in the second quarter 2017.