Polestar is a brand of sports road electric vehicles Volvo Cars Group, it is positioned as independent.

2020: Start of serial production of Polestar 2

March 24, 2020 Announced Volvo the beginning of serial production of the first electric vehicle under the bonus Polestar brand. The machine rose on pipelines in spite of the fact that other auto giants close factories because of spread of a coronavirus of new type.

Assembly of Polestar 2 is adjusted at the plant in the industrial center of the Chinese Chengdu. The factory was brought into operation at the end of summer of 2019. This enterprise is positioned as "one of the most eco-friendly productions in the country".

Capacities of this object by March 24, 2020 allow to produce about 500 thousand cars a year. Electric cars will go on sale both on the Chinese market, and on foreign.

Polestar 2 should compete with Tesla Model 3: the draft cost of the basic version of the electric car will be 39,900 euros. From China the model will be delivered to Europe and North America, and order taking for purchase of a car is begun in March, 2020. The first European customers will receive the machines in the summer.

Production Polestar 2 began how China gradually recovers from the crisis caused by a coronavirus pandemic. As of March 24, 2020 90% of the infected COVID-2019 residents of China recovered. It led to resumption of work of the plants of car makers. So, pipelines of the Tesla plant in Shanghai and also factories Nissan and were let Honda into the Provinces of Hubei.

Volvo applied serious strict policy on the Chinese production sites to guarantee that its activity in Celestial Empire will not be affected. For example, temperature checks, careful process of disinfection and a mask for each worker were one of the taken measures. Most likely, measures were efficient as in Polestar said that any of his Chinese employees did not catch a virus.[1]

February 27, 2019 Provided to Volvo the first electric vehicle under the bonus Polestar brand which develops independently. The Polestar 2 electric car is constructed on the Vovlo CMA platform.

Innovation is completed with two electric motors with a total power of 300 kilowatts (408 forces) and  a torsional moment of 660 Nanometers. Acceleration from 0 to 100 km/h is declared less than in 5 seconds. 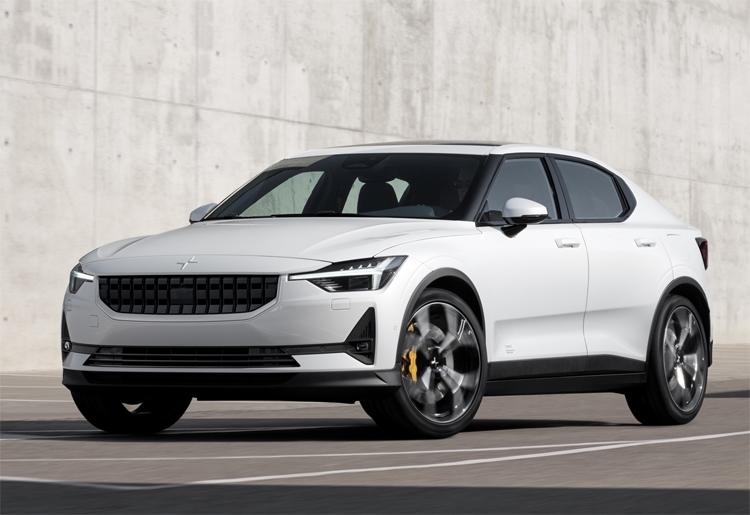 The electric vehicle Polestar 2 with Android will be onboard available in the younger version for 39,900 euros

The accumulator block consisting of 27 modules has capacity in 78 kilowatt-hours and allows the machine to pass without recharge up to 500 km (at measurements by a technique  of WLTP). Use of a system of the four-wheel drive is provided.

Polestar 2 received an information and entertaining system with the 11-inch display on the central console and the Android operating system with support of the majority of Google services, including Google Maps, Google Play Store and Google Assistant. 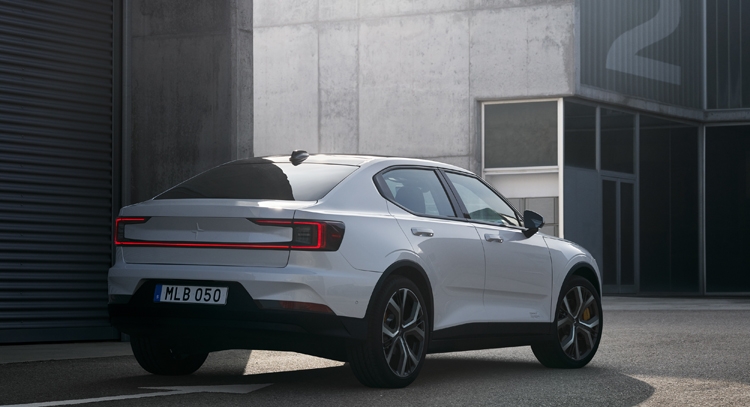 The stock of the course of Polestar 2 on one recharge, allegedly, reaches 500 km.

In the car the digital meter panel, pixel LED headlights, the panoramic roof and Phone-as-Key technology providing access to salon of a car using the smartphone are installed. Relatives and friends can transfer a virtual key and also to use for receiving corporate the concierge services, like delivery of purchases directly in the car. 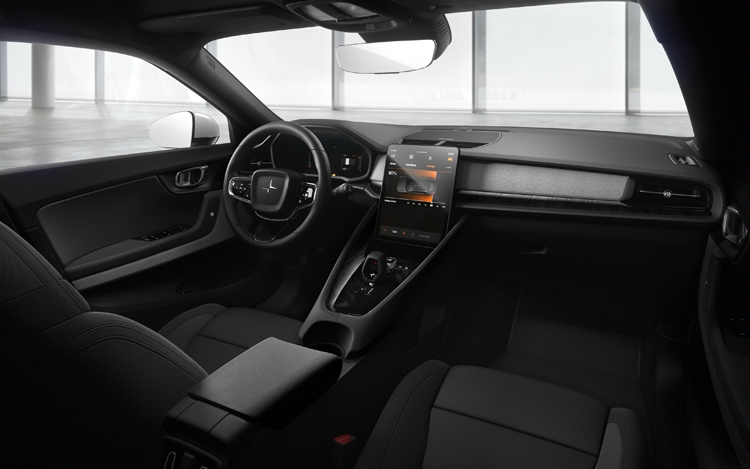 As an option the Performance Pack set including Ohlins shock-absorbers, Brembo brakes, 20-inch rims and golden coloring of brake supports and seat belts is available.

The cost of Polestar 2 will be from 40 thousand euros. However at first the electric vehicle will be on sale only in the version of Launch Edition, its price — 60 thousand euros. The beginning of sales is planned for 2020.[2]

Production will be organized in China, however is going to sell electric cars in the markets of the USA, Canada, Great Britain, Germany and other European countries.

In July, 2018 details about the first completely became known electric car Volvo. It is supposed that he will become a competitor Tesla Model 3.

In a conversation with the Autocar edition the operating officer of Volvo Johnathan Goodman (Jonathan Goodman) reported that the electric car under the name Polestar 2 will receive the 400 hp power unit and a set of rechargeable batteries which will allow the machine to pass about 560 km without recharge. The cost of the electric car will begin with $40 thousand. For comparison, Tesla Model 3 costs from $ 35 thousand. 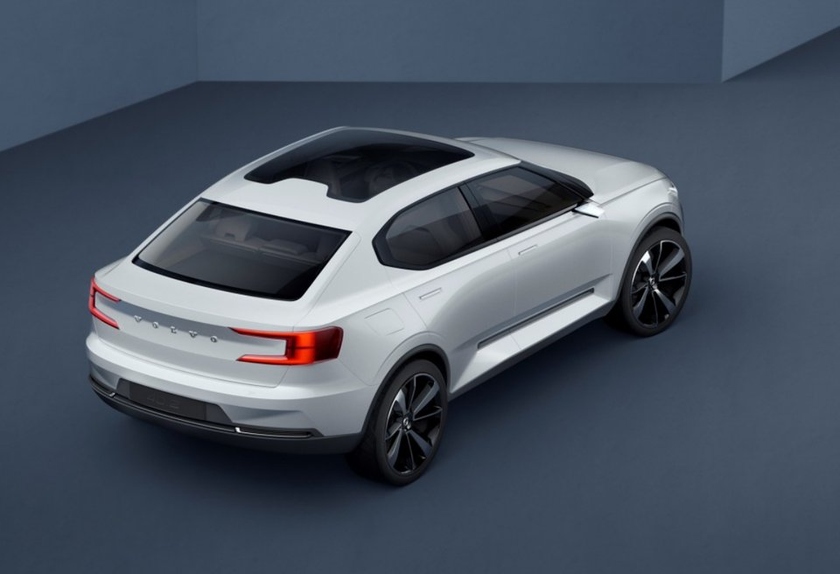 Concept of Volvo 40.2 based on which the first electric vehicle Volvo will be constructed

According to Goodman, Volvo is not going to do design of the electric vehicle futuristic, but at the same time the company intends to depart from traditional approach in a design of appearance.

The top manager did not begin to open additional parts concerning an exterior and an interior. It is known only that innovation will be constructed on the corporate Compact Modular Architecture (CMA) platform

According to the Business Insider edition, final design of Polestar 2, most likely, it will be close to Volvo 40.2 concept provided in 2017. Therefore most likely Polestar 2 will receive a body like sedan. By the sizes the first electric vehicle Volvo based on a concept 40.2 will be similar to machines of the 40th family: length is 4.3-4.4 meters, width is 1.7-1.8 meters, length of wheel base is 2.6-2.7 meters.

The premiere of Polestar 2 is expected at the Geneva motor show in March, 2019.

Volvo she intends to release since 2019 cars only with electric motors. It is going to make only three types of cars: completely electric, connected hybrids and so-called soft hybrids in which the petrol engine in particular setting the car in motion is combined with the small powerful rechargeable battery.

During the period from 2019 to 2021 Volvo will produce five models of electric vehicles, including three under the Volvo brand, and two will be let out by Polestar.[3]

Polestar confirmed in October, 2017 plans for release of the first three models, presence of the new specially created production capacities in China and also customer-oriented promotion of products in the market which will set a new level in the industry of the sports road Volvo Cars cars and two more companies created joint venture in parent Zhejiang Geely Holding. The joint venture with capitalization of 5 billion yuans (640 million euros) keeps Polestar development. Polestar remains Volvo Car Group controlled company and will be completely consolidated in Volvo Car Group. 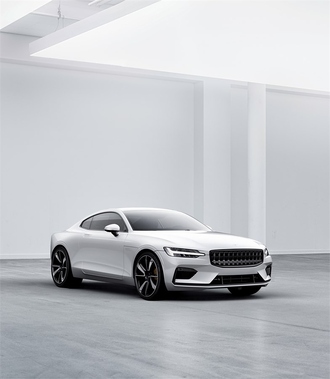 Polestar makes two models — S60 and V60 Polestar, the 367 hp sports road cars in which more than 250 changes in comparison with civil Volvos are implemented. Polestar offers also components of a sport packet Polestar and software for optimization of the engine.

On an equal basis with this Polestar provided in October, 2017 the first model — 600-strong Polestar 1 which should roll off the production line in the middle of 2019. Own technology base and also increase in production efficiency within cooperation with Volvo Car Group allow Polestar to force design processes, developments and production of cars — newbies in the market on a similar cycle need much more time.

The provided Polestar 1 sets the tone for all future models of a brand. Polestar 1 is a two-door compartment gran tourism with landing formula 2+2 with the hybrid Electric Performance Hybrid power unit which in fact is the electric vehicle with support of the internal combustion engine. On pure electric draft the car is capable to pass to 150 km — more, than any of the existing hybrids in the market. At the same time thanks to the power of 600 hp and a torsional moment of 1000 Nanometers of Polestar 1 without stretch it appears in a segment of sports road cars.

Polestar 1 is the cornerstone architecture of the scalable platform (SPA) of Volvo, however approximately for 50% it is absolutely new car developed by engineers of Polestar. The improved response and riding characteristics turned out to be consequence of implementation of the whole set of the latest technologies pursuing one main goal — to receive as a result of really drayversky car. Polestar 1 is the first-ever machine on the chassis equipped with absolutely new technology of constantly controlled electronic Öhlins (CESi) suspender. At the expense of a carbonic body the mass of the car is reduced, its rigidity on twisting increased by 45% and also the center of gravity of all construction is lowered. On Polestar 1 the dual back electric drive which allows to control distribution of a torsional moment is implemented. As a result necessary acceleration is transferred to each wheel thanks to what the maximum coupling with the road remains and the car perfectly behaves in turns. 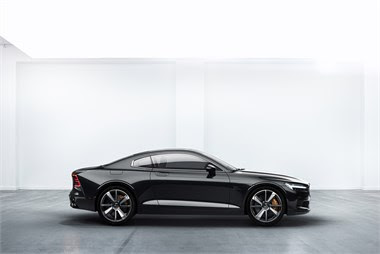 Polestar 1 will gather in the Production center Polestar equipped state-of-the-art to Chengdu, China. The center is built especially for this purpose, the construction should be completed in the middle of 2018.

In future Polestar will depart from the traditional scheme of ownership of the car. 100% of machines of a brand will be ordered online and to be offered by the principle of two - or a three-year subscription. The lack of a deposit, a subscription on model will be "all inclusive" complemented with services like the goods delivery in the machine and also an opportunity to change the car for another within a lineup of Volvo and Polestar — all this is provided by a monthly payment.

The subscription with the fixed rate means that ownership of Polestar will be the simplest and clear. The technology of access to the car via the mobile phone (Phone-As-Key) will allow to transfer a virtual key to the third parties and to open access to a number the concierge services. The main care of the driver from this point — to derive pleasure from driving.

All subsequent Polestar models will be equipped with completely electrical power units. Production Polestar 2 will begin towards the end of 2019 — for Volvo Car Group it will be the first electric vehicle on battery power supplies. Polestar 2 the midsize car with production volumes will be much higher, than at Polestar 1; its task — to become the competitor of Tesla Model 3. The electric Polestar 3 crossover which will become the brightest and technological embodiment of modern dynamic electric vehicles will complete an initial line of the Polestar cars.