Samsung promised to return a half of cost of Galaxy S20

Samsung started an attraction of unprecedented generosity. The company promises to redeem the Galaxy S20 smartphone for a half of cost in two years after use, having paid cash, but not a discount for new. Depending on modification it will be possible to receive from 500 to 800 dollars. In addition to an obvious condition — not earlier, than in two years, there are several important restrictions. Of course, the smartphone should be in a "good" status — completely operable, with the whole screen, without serious scratches and chips. But the most important — the smartphone should be purchased directly from Samsung via the website[1].

An opportunity to add an option of share repurchase appears only at the very end of process of purchase of the smartphone on the website of Samsung. And at the moment the option is available only the North American market. There is an opinion that if it will positively affect Galaxy S20 sales, the stock can be distributed also to other markets. And, of course, upon purchase of the smartphone in any retail network or at the operator no program of share repurchase is offered. And classical trade-in assumes payment not by money, but a discount for purchase of other smartphone.

On February 11, 2020 the official presentation of the flagman Galaxy S20, S20+ and S20 Ultra smartphones  from Samsung company took place. The Space Zoom function in  which the hybrid optical zoom and  digital increase with  use of artificial intelligence are integrated became one of perceptible innovations. On   S20 and S20 + the image can be enlarged by  30 times, on  S20 Ultra  — by  100 times. 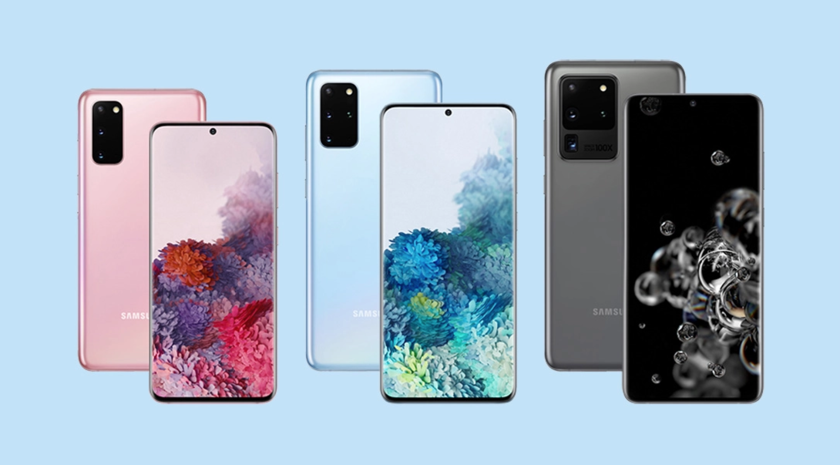 In the Multikadr mode  of Galaxy S20 can make several photos and video at once, for example, in the Live Focus mode, with approach or on wide angle, at the same time on all main cameras and to use AI to recommend the best of them.

All three devices from a flagman line are equipped with the internal memory of 128 GB and work on  the new Guardian Chip processor which, allegedly, will be able to protect the smartphone from the harmful attacks. Accumulator capacity is 4000, 4500 or 5000 mAh depending on model.[2]

Galaxy S20 is supplied with AMOLED display with a diagonal of 6.2 inches with support of update rate of the image of 120 Hz and the HDR10+ standard. As well as in last generation of smartphones, the ultrasonic fingerprint scanner is built in the lower part of the screen. The new Samsung smartphones will go on sale in the Russian market at the following prices: