Capital asset of Tencent — the WeChat messenger which has about one billion active users (absolute majority of them — in China). The Chinese WeChat was created in 2010 by the local IT specialist Zhang Xiaolong – in it he tried to integrate a set of different services at the expense of what the program and received huge popularity: decided to set the messenger about 1.1 billion people from whom most part, of course, Chinese.

Focused strictly on the Asian market, it has 818 million active users whose total number grows approximately on 14 million a month. Extending also to Japan, the messenger of messages becomes the direct competitor for Line though, having support of 52 languages, can quite occupy a "bronze" step in the rating of "the global systems".

WeChat has several distinctive features. First, thanks to the fact that in China many western Internet services are blocked, including Facebook and Twitter, WeChat has few competitors — and all use it literally.

Secondly, WeChat is more, than just the messenger; with its help it is possible both to organize video conferences and to call abroad on mobile and stationary phones and to send payments and to pay in supermarkets and to look for information on the Internet and to read news and to play games. Forbes in 2014 called WeChat "the main application in China".

On November 15, 2018 the company Yandex.Money reported that in the Yandex.Cash the next method of payment acceptance — through WeChat Pay appeared. According to the company, the present possibility is useful to outlets which work with the Chinese tourists or intend to do it in the future. Read more here.

The WeChat megaservice began to work in Russia

In Russia there began work the payment service of WeChat Pay functioning based on the megapopular Chinese WeChat messenger. Only the citizens of China who are in the territory of Russia can use WeChat Pay meanwhile. In addition to Russia, service works in 16 countries.

The international payment system of Sendy which allows to make payment from the mobile device using the QR code became operator of transactions WeChat Pay in Russia. On the website Sendy published the message about start of WeChat Pay in Russia, to which the resource Swarm paid attention[1].

In WeChat each user has a purse with the unique dynamic QR code which is appropriated at the time of registration and 2 times a minute for the purpose of security change. This code is also used when calculating through WeChat Pay. To carry out payment, the code is scanned at the checkout in a sales point, the confirmatory password is entered then. For transaction it is possible to use both the code of the buyer, and the code of the seller, for this purpose to the buyer is enough to scan of it the mobile device, the cash desk in this case does not need to be equipped in addition. Often to different goods sellers generate different codes and expose them in the form of plates on counters or at the checkout.

From a purse in WeChat the user can pay purchases for the amount to 200 yuans (about 2.5 thousand rubles). The same amount can be sent to other user, using the well-known "red envelopes" of WeChat.

Besides, through WeChat Pay it is possible to pay travel by high-speed trains, intercity buses and airplanes. Also the user can cause and pay the taxi, order food on the house, purchase the ticket at cinema, pay utilities and make donation on the charitable purposes.

Sendy notes that today in China practically any goods and services are available to the order through WeChat, also more and more foreign sellers join a system.

2017: The WeChat messenger will become the official identification rule in China

At the end of December, 2017 it became known of use of WeChat as official means of identification of people in China. It will be possible to get access to state services through the messenger, to be registered in hotel or to purchase tickets. For comparison, in Russia for access to different "important" services it is necessary to become authorized through the system of state services.

The pilot program is started in Guangzhou, since January, 2018 it will begin to work across all territory of China. As envisioned by the authorities, WeChat should become the virtual identity certificate which will replace traditional certificates[2]. 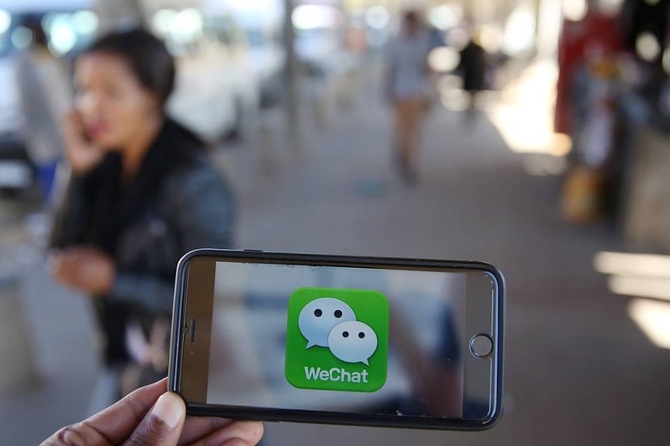 The messenger instead of state services: as WeChat becomes the official identification rule in China

The idea consists in  use of a system of face recognition for authorization in  the WeChat application. It is supposed that it will allow to avoid leaks of confidential information and  will exclude a possibility of counterfeit of virtual passports

The program of use  of ID cards in WeChat is developed by joint efforts of a research institute at the Ministry of public security of China and development team of WeChat. The project was supported by banks and a number of the state departments.

Virtual ID cards of service will allow their owners to use public services and the delivery services, to be registered in hotels, to buy tickets and to make other actions and purchases upon which it is necessary to confirm the personality. Also through WeChat it will be possible even to register home company.

Residents of China will be able to receive two versions of the ID card: the "facilitated" version which is suitable, for example, for registration in an Internet cafe, and the "advanced" version which will allow to register business.

According to South China Morning Post, China already made an experiment on creation of a system of electronic identification of citizens. In  June, 2016 Bureaus of public security in the city of Wuhan (the capital of the central Chinese province of Hubei) together with  Alipay began to test the program of virtual passports for 400  thousand city dwellers for passing of control at  the airports and  at  railway stations. Within this pilot project of users identified on accounts in Alipay.

Besides, Alipay and WeChat separately from each other started the digital services replacing use of driver's licenses and social security cards.

If the program for creation and implementation of the virtual ID card started in December, 2017 passes successfully, it will become the next milestone in evolution of the application from the simple messenger in a single system of identification, notes the edition.[3]

By the end of September, 2017 the number of users of WeChat who start the messenger at least once in a month was 980 million. In addition to communication, the service offers functions of payment of services and money transfer.