Standard support of a system is stopped on April 10, 2012 and now the Microsoft company tries to complete the five-year term of expanded support. Within these actions patches and updates of a security system are issued. In a year computers on Vista are left without protection.

As of January, 2017 this OS was installed less than for 1% of the PC using the systems of Microsoft the Net Applications research firm reports. According to the approvals by Microsoft, now different versions of Windows are used on 1.5 billion PCs, i.e. the number of devices with Windows Vista is about 14 million. It is not a lot of in comparison with older Windows HR which share exceeds 9% of all Windows computers.

Developers specified that OS will continue to work on the user computers, however will be vulnerable for viruses. Besides, if the user of OS uses for Internet connection of Internet Explorer 9 (the recommended browser for Windows Vista), it can also face security concerns as support of the browser stops together with support of OS. Besides, Microsoftne guarantees compatibility with the "written-off" OS of future applications. As an alternative suggested users to carry out upgrade of the operating system to Windows 10 to the companies (except for the PC of an old configuration).

The Microsoft corporation announced on April 10, 2012 end of the period of the so-called "main support" of the Windows Vista operating system. Now users will be able to receive free updates for this OS only if they fix the serious problems connected with security of applications. In such mode the operating system will be supported within 5 years, till April, 2017. 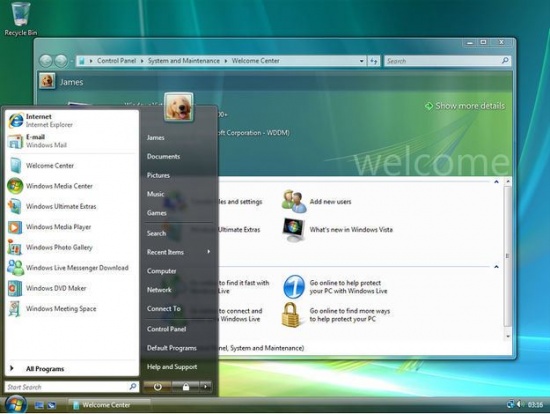 Besides, Microsoft releases some more versions of Windows Vista especially for the European market. For the purpose of observance of the antitrust law in Europe, in these versions there is no Windows Media Player and other multimedia components.

Also the control system of accounts of users (UAC) was exposed to criticism. According to representatives of the Kaspersky Lab (KL), the management tool the user privileges and accounts of User Account Control (UAC) which is built in Windows Vista represents security element which was so bothering to users that many just disconnect it. Natalya Kasperskaya, being the head of KL, noted that without UAC Windows Vista is less safe, than Winows XP SP2. Besides, in KL said that analysts of the company detected five methods of a bypass of UAC, and creators of malicious software will detect them even more.

The packet of SP1 contains a full range of updates for Windows Vista which the Microsoft corporation released within the last year and also new opportunities. In particular, the speed of copying of files is increased, process of a software update is improved, support Direct3D 10.1 is added, the compatibility with MPEG-2 is improved, the errors arising in Windows applications of Calendar and Windows Media Player are eliminated, performance and energy consumption of a system are improved.

Thanks to updating SP1 in Windows Vista there was a support of the majority existing at the time of an exit of a packet, hardware and the software are about 80 thousand devices and components. Also with a release of Windows Vista SP1 the compatibility with the main business applications of such producers as Adobe, Cisco, Citrix, IBM, Nortel, Oracle, SAP, Sun and Symantec was added.

The first public version of Windows Vista SP1 RC was laid out in December, 2007. On March 18, 2008 the service pack appeared in the English, French, Spanish, German and Japanese languages. In April of the same year there was the Russian version of the first service pack.

The second service pack for the Windows Vista operating system, at the moment, is in a beta testing stage. As expected, the final version of a packet will bring with itself support of 64-bit VIA processors, support of the exFAT file system, a recording capability of Blu-ray of disks, support of the last Bluetooth 2.1 technology, the configuration Windows Connect Now (WCN) Wi-fi tool and the latest version of the desktop search Windows Search 4 engine. Besides, SP2 will have to improve Wi-Fi performance at Vista exit from the dream mode, to reduce use by gadgets of resources and to perform some inline tuning of a system.

The Vista Capable level only guarantees that Vista will work. The listed above requirements correspond only to the satisfactory level of work.

According to the statement of Microsoft, marking of "Premium Ready" guarantees that the PC will support a maximum of the Windows Vista functions, including the Windows Aero interface.