As Assistant of CMTPL — the first state superservice was created 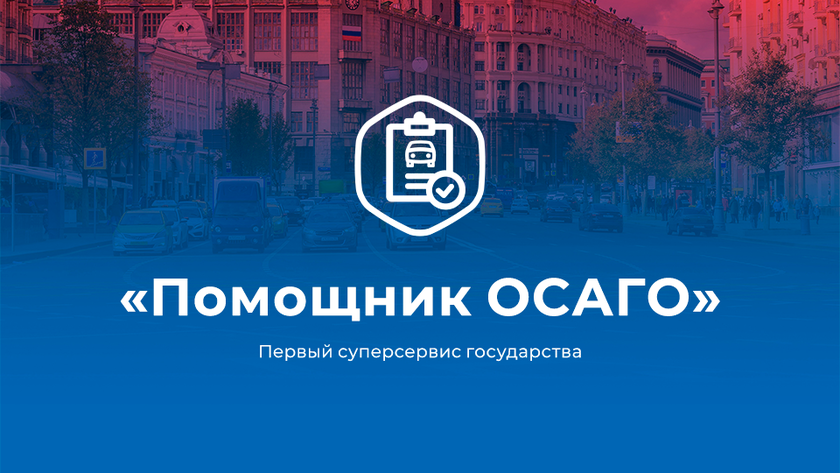 "The assistant to the CMTPL" - the first superservice of Russia

Superservice is a new type of public services which are provided in electronic form, without personal visit, queues and paper forms.

According to motor insurers, in 2017 every second road accident was made out through the European Accident Statement.

However insurance companies can not always pay compensation only on its basis. Documents are often processed with errors. Sometimes one of cars is not insured. But also it happens and so that in the protocol invalid data of the policy or the owner of the car are specified. Any of these reasons is a formal reason for insurance company to refuse payment.

It is obvious that the online service which will be able to check "on the fly" data will help to avoid the majority of these errors. And insurance companies will reduce costs for processing of incorrectly completed protocols and will reduce percent of fraudulent activity.

The idea to replace the paper European Accident Statement with the mobile assistant arose in 2017 within discussion of state "superservices". The application had to:

Any Rocket Science, it would seem — take and do.

But as it not the simple application, but superservice, very careful study at the level of different departments, including a huge number of approvals and change in the legislation was required.

This preparatory stage lasted for one and a half years.

The project started in 2017 under the auspices of the Central Bank of Russia and with direct support of the Ministry of Telecom and Mass Communications within implementation of the federal draft "Digital Public Administration" of the national program "Digital Economy".

The preparatory stage was difficult. The team of analysts, designers and architects studied legal documentation and planned necessary for integration. In passing looked as this problem is solved in other countries.

The purpose of all project was clear — a simple design of road accident through the application. As it was clear to make it not quite.

Of course, it would be desirable to simplify as much as possible a task — to put documents on a cowl, to photograph them, to capture damages of cars on a film, all this somewhere to send and receive payment or repair. But drawing up the European Accident Statement — very formalized history. Issue the uniform form completely similar to the form, there was no sense. 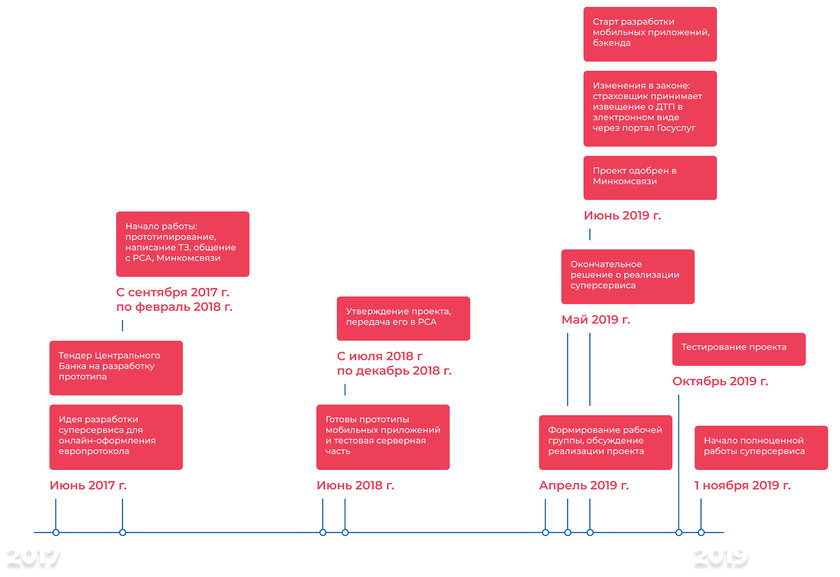 At the beginning of 2019 the prototype of the project was transferred to the Russian Association of Motor Insurers (RAMI) for completion and introduction to real operation.

On July 24, 2019 the Presidium of the Government commission approved superservice for execution of the European Accident Statement online, necessary changes were made to the legislation.

Official start was appointed to November 1, 2019.

In three months it was necessary to finish considerably a prototype to the final version. First of all it was required to process completely integration with external services — the backend of RSA considerably differed from a test server in a prototype, the structure of the obtained data and processes of their processing considerably changed.

Also in the application it was necessary to implement additional functionality and a new interaction logic with several systems.

The project imposes the high requirement to information security therefore some problems in 65apps were solved unconventionally — only this way perhaps correct observance of procedures.

If photofixing of damages is carried out, the application should guarantee that pictures are taken on site accidents, but are not loaded from memory of the device. The custom camera which takes pictures was for this purpose developed, ciphers them and sends to the RSA server, without interacting with any data warehouses.

And in order that participants of road accident could sign the EDS protocol, each of them needs to become authorized on the Gosuslug portal. Work with it is implemented through a web form which is integrated into the application.

In 65apps simplified also the description of damage: added the list of parts of the car to the application.

And when almost everything was ready to release, the customer decided to make several significant changes to the project. 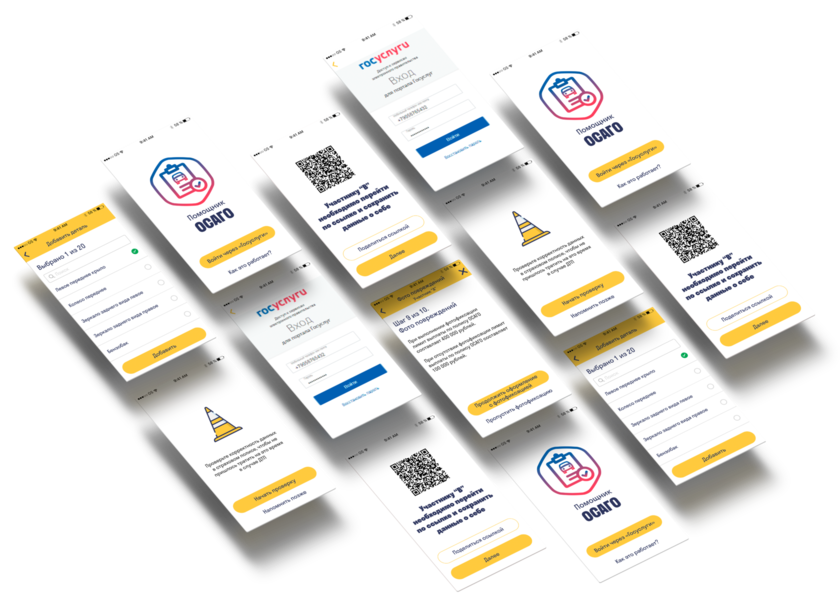 The government made the decision that the application will be in full started only in 5 test regions. But photofixing should be available to all residents of Russia.

This solution was approved by the government decree — will not argue with it.

In 65apps defined three scenarios of operation of application:

Actually, one more prototype with new cases and scenarios of work was prepared.

Change of navigation in the application became the most uncommon task. It was necessary not just to break all process into several stages, but also to work different scenarios.

All these changes were made in parallel with development of a backend which conducted LANIT and "Rtlabs". Functional requirements and to specific solutions and here periodically changed. Also the interrelation with two systems was considered at once: AIS CMTPL and Gosuslugi.

Therefore approval of all changes is another story. Process went in vertical direction, at first in a command, then — above, to RSA, and finalno in the Ministry of Telecom and Mass Communications. At the bottom levels colleagues from LANIT and "Rtlabs", being responsible for a backend and integration with Gosuslug service were connected to discussion. In total people took part till 20-25 in approval.


On approval of logic which is the cornerstone of operation of application, can leave up to two weeks. Therefore on start of the project the priority functionality — that which solves a key problem of the application was defined. And all approvals began with it. Other features added consistently: small problems can be solved with processes of approval of key questions.

In a work progress contractors collected are called twice a week. On Tuesdays resolved organizational issues (controlled who as as does, approved texts and elements of design, received a feedback from RSA and the Ministry of Telecom and Mass Communications), on Thursdays discussed issues of development and direct parts of implementation. If necessary also unplanned meetings were held. All arrangements surely fixed protocols.

For the presentation of a prototype used interactive models in Figma service. It very much accelerated approval: participants could study in detail in the preview mode process of submission of the notification, estimate result and to leave fidbek.

Project implementation lasted 2 years: from start of the project before real approbation.

From outside 65apps 35 people were involved in the project.

The project was completely ready in October, 2019 and the month which remained before start customers held the general integration testing of all systems.

Released applications exactly on November 1 at 0:01 a.m., on the dot without delay.


He reminded that over 50% of accidents are now made out without call of traffic police officers. Thanks to mobile application hundreds of thousands of car owners who got into accident will be able to reduce time for an accident design many times. Besides, by means of mobile application Assistant of CMTPL the car owner can beforehand, check before road accident validity of the policy via the AIS CMTPL on its series and number.

Since launch of superservice in mobile application issued road accident of 1229 times, it in only 5 test regions.

And there are a little outputs

Working with state structures or big customers be ready to maintain terms. Or do not undertake at all.

If in the project think over more than 5 persons participating in approval in advance as you will build interaction process. And with what to occupy a command waiting for approvals.

When everything is already almost ready, requirements to the project can exchange. And it is essential. Learn to manage risks and requirements competently.