2020: Carrying out the next stage on digitization of rare editions

On February 13, 2020 ELAR corporation announced carrying out next a stage of works on digitization of rare editions for the Tula regional scientific library. 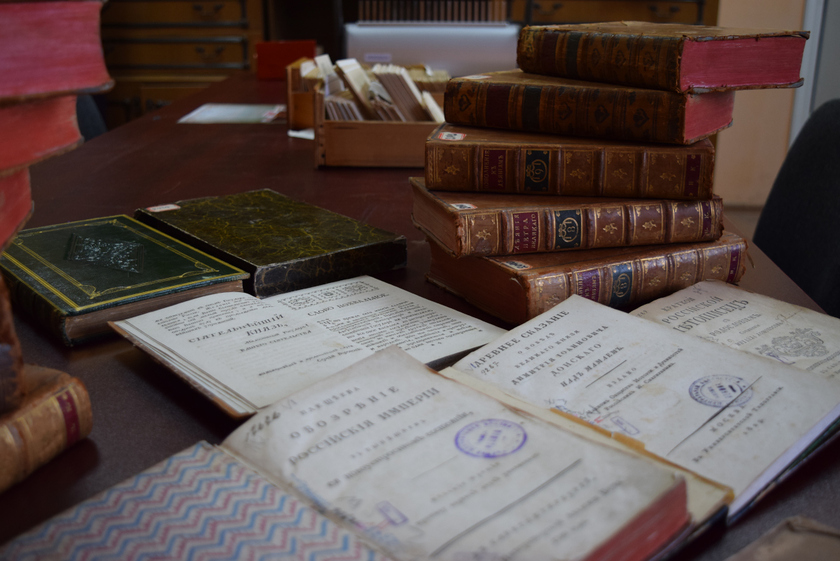 The Tula regional scientific library locates a considerable collection of book monuments which preserving is in number of priorities of activity of organization. So, in 2019 within the actions of the national Culture program at the expense of means of the state program "Cultural development and tourism of Tula region" is digitized more than 300 documents, and ELAR Corporation was attracted to work with the most valuable of them. Among book monuments, for example, "The ancient legend on a victory of the Grand duke Dimitrii Ioannovich Donskago over Mamay" (Moscow, 1829).


Among the digitized books - "Pleshcheeva Obozreniye of Rossiyskiya of the Empire in a Present Eya a Status" (St. Petersburg, 1790) on which pages there is a description of the Tula namestnichestvo. Among remarkable features of the city of Tula the author notes, in particular, "the nice iron and small-arms factory supplying with weapon all Russian army". All editions were digitized by specialists of Corporation on a professional equipment of ELAR which provided careful and high-quality scanning of originals. As a result of work the array of e-books with modern search opportunities and an array of bibliographic records was created.

The digitized book monuments are placed in full text base of the Tula regional scientific library, to them access to the Internet on its website is organized.

According to the results of the state order of Tula region of an auction which is carried out by Committee ELAR corporation implements a complex of planetary scanning of ELAR Planskan A2.V-Ts3R in the Tula regional universal scientific library. The library will use the new equipment for improvement of processes of rendering public services in electronic form and filling of full text databases.

The equipment allows to digitize the stitched and large-format originals (to A2) there are books, directories, ancient volumes and others, including valuable and shabby, documents. In the device the innovation reprosistema of LED lighting is applied by "a moving band". The lighters expected all term of scanner life exclude harmful effects of light on valuable editions and provide the most comfortable working conditions of the operator.

Now Public institution of culture "Tula regional universal scientific library" is one of the main information centers of the region. Equipment of library the modern equipment will allow librarians of a message effective work on formation of electronic resources, providing to readers access to electronic copies of rare and valuable editions and preserving of cultural heritage.