|}-->
The video conferencing (VIDEOCONFERENCING) is a technology of interactive interaction of two and more remote users at which between them exchange video and audioinformation in real time is possible.

Russian market of the VKS systems

According to TAdviser, in 2016 the Russian market of the systems of a video conferencing in terms of money showed negative dynamics. Basic reasons to that a little. The companies optimized IT budgets, purchasing amounts of the VIDEOCONFERENCING expensive hardware systems decreased, at the same time, demand for more available software solutions grew. In 2017 some market participants manage to achieve growth (in more detail...).

The main drivers of the domestic market of a video conferencing are a migration on program VKS which can be also provided according to the SaaS model, development of the systems of unified communications and process of aging of the equipment which is available for customers. At the same time, there are so-called immortal drivers of the market, such as aspiration of the companies and state bodies to increase decision making speed, desire to optimize costs and to increase efficiency (in more detail...).

Innovations in the field of a video conferencing

TAdviser found out from the Russian participants of the market of VKS what innovations in the field of a video conferencing it is possible to be coming (in more detail...).

the Most popular VIDEOCONFERENCING systems and leading vendors

As of July, 2020 the base of projects TAdviser accumulated data approximately about 3.7 thousand implementations of the systems of a video conferencing of which over 3.5 thousand are executed in Russia. The Russian solution of Video conference became the leader among the most often implemented systems (in more detail...).

Industry specifics of the VKS projects

According to data of TAdviser base, implementation projects of the systems of a video conferencing are most often executed in a public sector and education. Shares of these industries as of July, 2017 make 17 and 14% respectively is more detailed.... 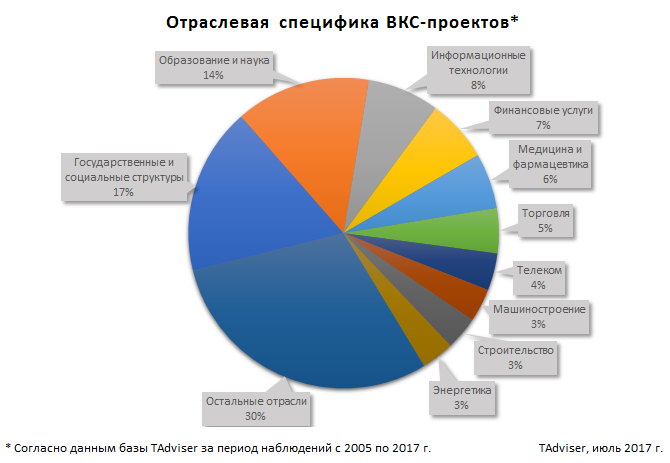 Geography of the VKS projects

As of July, 2017 the TAdviser base contains information approximately on 1.5 thousand projects of implementing solutions for a video conferencing. Their main share (nearly 90%) is the share of Russia. 2.2%, 1.1% and 0.6% of projects respectively belong to Ukraine, Kazakhstan and Belarus. About 6.3% are implementations in other countries of the world.

Among the projects executed in Russia, more than a half - 51.6%, are the share of Central Federal District. 12% of implementations of VKS are executed in Volga federal district, 11.5% - in the Northwest. Shares of other districts are given on the chart below (in more detail...). 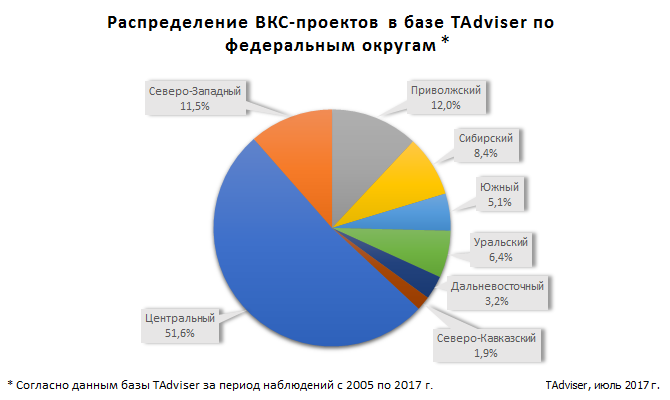 Yakov Shapiro, Jet Infosystems: the it is less in the multimedia system of hardware components, the it is more convenient and more profitable

Technology trends in development of the Russian market of VKS

Market development of VKS is characterized by gain of dynamics of software solutions, more active implementation of cloud services and mobilization distribution. VKS join on the general Wednesday of the joint communications – products should be integrated with other corporate systems, third-party programs and services.

the VIDEOCONFERENCING of VideoMost under a brand of Rostelecom

In the third quarter 2016 global sales of the equipment for video conferencing and telepresence reached $542 million, having increased by 6.1% concerning an indicator of year prescription. Data of analysts of IDC demonstrate to it.

The VKS systems are divided into program and hardware, cloud and installed, personal and group.

Approaches to implementation of VKS

Historically consumers of products for a video conferencing are the large companies with geographically distributed structure. For them VKS — the irreplaceable instrument of operational management which allows to save significantly expenses on business trips in regional representative offices.

Principal components of the VKS system

The system of a video conferencing can be provided from several principal components. Among them – the codec, the camera, the microphone, means of display and also existence of network connection. Ensuring guaranteed quality of communication – the most important task for the VKS organization.

The rating of VKS developers in Russia 2016

The analytical center TAdviser in 2016 prepared the rating of key developers of the systems of a video conferencing provided in Russia. According to the research, the offer of most of players is under construction proceeding from requirements of the customers focused on optimization and performance improvement today.

The rating of service providers on creation of the VKS systems, 2014

For preparation of rating of suppliers a number of the parameters having the greatest value from the point of view of the existing and potential customers of the VKS systems was selected. For detection of the similar parameter list express poll of the customers representing different branches of the economy was held (retail, a telecom, finance, insurance and so forth). During the poll it became clear that in addition to requirements to actually solutions, the sizes and scales of business of supplier company (which can be estimated, including, and on the generated revenue) also have important value for possible customers. This parameter, respectively, too was included in summary rating.

The VKS glossary for business