The volume of the world market of automated design engineering systems (CAD) in 2019 was more than $9.3 billion, counted in Research and Markets research company. Analysts did not specify dynamics relatively 2018 and only noted that sales of such software increase.

According to specialists, one of the main catalysts of market growth are the solutions used in the packaging industry integrating manufacturers of packing machines and the equipment, packing materials and products. As packing machines become harder and harder, designers and engineers use the software of a CAD for solving of tasks of mekhatronny engineering that promotes sales of the corresponding IT solutions, analysts note. 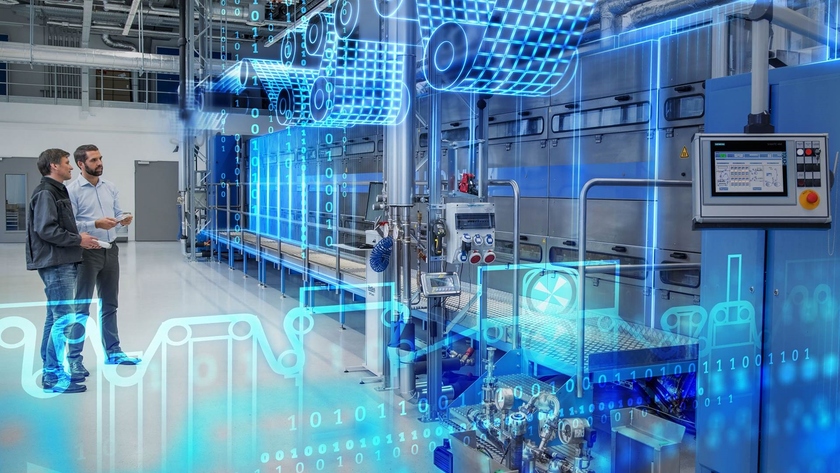 The size of the market of a CAD exceeded $9.3 billion

One more factor, positive for the considered market, is connected with use of a CAD in the automotive industry. Car makers aim to monitor the reputation therefore all do to minimize a withdrawal of machines. Besides, emergence on roads of cars with support of network communications induces engineers to apply the innovative solutions and tools, such as CAD, to simplification of development and design of products, it is explained in the report.

At the same time there are also barriers hampering the market growth. Among them – the growing quantity of products with open source codes and free versions of a CAD.

From the geographical point of view the greatest contribution to positive dynamics of the market of a CAD is made by the Pacific Rim where investments into the construction, defense, automobile and processing industries are increased. Japan is the leading software market for automated design in the Pacific Rim. Market growth in this region will advance growth of the market in other countries. At the same time North America which, most likely, will remain on the first place in the years ahead in many respects thanks to the growing use of automated design in aerospace and defense industry remained the largest sales market in 2019. 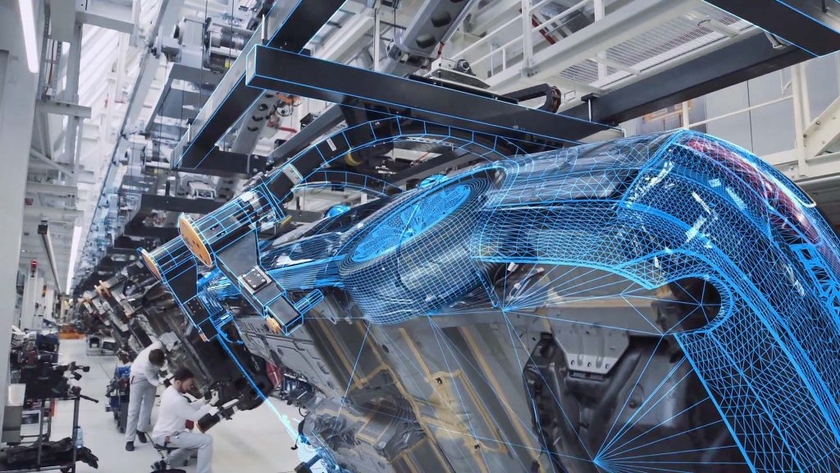 In a research it is noted that the market of a CAD remains fragmented: a large number of players works at it, each of which has a small share of revenue in an asset. Carried the following companies to number of the CAD largest producers of analytics (are listed in alphabetical order):

According to experts, use of a CAD gives the chance of complex optimization of production organization at all stages – from purchase of materials and components, before production management of spare parts for the sold products. It is important that many automated design engineering systems allow to receive at the exit not just design documentation, but the files ready to loading in machines - the processing centers with numerical control. It allows to organize effectively distributed production, having minimized downside risks of quality of finished products. The large companies can focus on key production processes, providing themselves with necessary auxiliary products, parts and spare parts due to formation of an ecosystem of small and medium production companies.

Perspective trend of development of a CAD analysts call transition to cloud computing when the client purchases access to a system to a certain term.[1]

In April, 2015 the Jon Peddie Research (JPR) analytical company published results of a research of the world market of the software for design automation (Computer Aided Design, CAD, a CAD). Experts recorded the continuing growth in sales of these solutions and the remaining domination of Autodesk.

According to estimates of specialists, the size of the market of a CAD in 2014 was $7.81 billion against $7.23 billion the previous year. The number of users of these products reached 5.15 million people.

In the report it is said that for the last decades the market of CAD showed modest growth rates though after crisis in 2009 he endured significant changes. After them the market became more effective, the personnel situation in it improved, the potential for rise the next years is created. It is predicted that from 2015 to 2017 sales of a CAD will annually grow for 4% and by the end of this period it is reached $8.7 billion.

Dynamics of increase in demand for a CAD in regions depends on a local economic situation. In the countries where the economy is on rise, production volumes and constructions increase, so software for design automation is on sale better, the analyst of JPR Kathleen Maher explained. 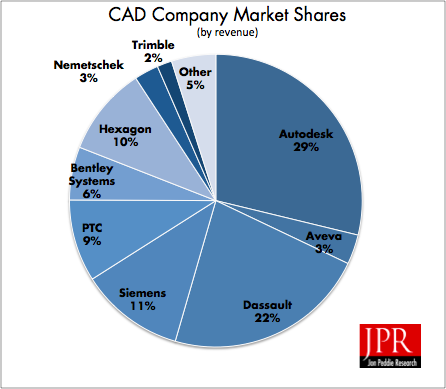 The list of the CAD largest producers, data of JPR for 2014

According to Cathleen Makher, the market of CAD is open for new players, and those use the given opportunities, offering all new technologies. The analyst carried Hexagon, Trimble, SpaceClaim (Ansys is purchased) and GrabCAD to the companies which changed a situation in the industry (Stratasys belongs).

These and other players promote public awareness of such trends in the market as virtualization, cloud and mobile computing which became the most important components of business plans of producers.

"Take at least mobile devices: difficult to find the supplier of a CAD who would not create the application for tablets" — Cathleen Makher noted.[2]

As for geographical distribution of the market of CAD, in the 2012th first place was won by Europe. Analysts explain it with presence on the European continent of a large number of the enterprises from the car - samoleto-, mechanical engineering, electrical equipment and electronics who are the main users of CAD.

As the leading players of the market of CAD the companies Autodesk, Dassault Systemes, Siemens PLM Software and PTC are called.

Commenting on results of a research, TechNavio notes that in connection with gain of the competition of the enterprise efforts on deduction of customers and satisfaction of their requirements increase and therefore try to make more and more high-quality products. At the same time global and local suppliers of computer-aided design facilities for promotion of the CAD systems increase investments into some developing countries. As a result of the enterprise of these countries begin to use more actively these means for quality improvement of the products and production efficiency. Besides, suppliers began to hold seminars, to participate in industry shows, to organize a road show and to strengthen the relations with educational institutions to acquaint with the systems potential customers from industries. According to analysts, such aggressive marketing is the brightest trend of the last time in the market of CAD.

According to the forecast of TechNavio analytical company, the world market of software for design automation (Computer-Aided Design, CAD) in the next five years annually will grow on average for 8.6% and to the 2016th will reach 8.3 bln. dollars.

Analysts consider a main growth driver requirement of the enterprises for enhanced capabilities of visualization of products. And the main brakes are piracy and the amplifying popularity of software open source. These trends, probably, are connected with the fact that implementation of CAD solutions requires high initial investments and also considerable expenses on training of employees in effective use of these means. It constrains distribution of CAD.

According to Jon Peddie Research analytical company, the market of a CAD overcame recession effects in 2009 and actively develops. As a result in the 2011th its volume, by a preliminary estimate, reached 7 bln. dollars that it is more, than was in the best the 2008th (6.7 bln. dollars), and the number of users grew to 19 million people (in the 2010th they were 18.5 million).

Considering trends of the last decade, analysts select globalization which had a huge impact on all segments of the market of a CAD. Economies of developing countries quickly grow, and in developed the stagnation caused by financial problems proceeds. In production the outsourcing share increases, and as a result more and more industrial enterprises move from the western countries to east.

In terms of technologies the main trend consists that information management becomes a design process component. Technologies of product lifecycle management (PLM) and an information model of the building (BIM) which serve for joint work of geographically distributed teams of designers and the organization of interaction of the enterprises with suppliers, partners and clients are intended for implementation of it.

Though the report covers only instruments of design automation, analysts consider that it should be noted impact which evolution of the information systems considerably increasing efficiency of work of engineers has on the market of a CAD.

But life does not stand still, and new trends appear. So, recently the wave of industrial outsourcing began to fall down gradually as in the West becomes obvious that a number of productions should be retained. It is promoted by an economic crisis because of which salaries in the developed countries were reduced and it became more profitable to employ the local personnel, than earlier.

Other feature of a present situation in the field of design is increase in a share of elderly employees, especially in segments of discrete and continued production. It offers prospects the young specialists having necessary knowledge and experience.

As for features of the market of a CAD, in the territorial plan distribution of demand is aligned. Now 37% of the market are the share of both America, 28% — of the region of EMEA, 21% — to Asia and 4% — of other countries. At the same time the markets China and India which development was not slowed down even by crisis most actively grow, new regions, such as Latin America, Africa, Southeast Asia and the Middle East join them.

In the industry plan most strongly crisis was reflected in a segment of a construction CAD (Architecture, Engineering, Construction — AEC).

In the long term new models of distribution and the platform will be the main engines of the market of a CAD. Automation systems of design are difficult products which traditionally provide to the developers a high margin. But distribution of cloud and mobile computing opens new opportunities before suppliers: on the one hand they will be able to advance on mass market inexpensive applications for consumers, and with another — to offer high-quality services to those customers who purchased a subscription to such services.