Rossrextre - Cadastral Chamber for Moscow - Office of the Federal Service for State Registration, Cadastre and Cartography in Moscow
Head of Department 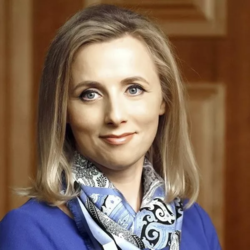 After school, until 1996, Svetlana Bondarchuk studied at the Moscow Order of the Red Banner of Labor, an institute of land management engineers. Two years later, she received a diploma from the Royal Royal Technical University in the program "Real Estate Management."

From 1996 to 2000, Bondarchuk held the post of specialist of the Federal Cadastral Center "Earth."

From April 2010 to November 2011, she acted as head of the property and income taxation department of the Federal Tax Service of the Russian Federation.

As it became known on May 13, 2022, telephone fraudsters stole 1.2 million rubles from the deputy head of the Federal Tax Service (FTS) of Russia Svetlana Bondarchuk. According to TASS, citing a law enforcement source, unknown people contacted Bondarchuk and introduced themselves as employees of Sberbank and the Central Bank of the Russian Federation. They convinced her to transfer the funds to "safe accounts," which the victim did. Realizing that she was deceived, she wrote a statement to the police, according to the agency's publication.[1]