Kyocera TASKalfa PRO 15000c: the only thing in the segment of the MFP for stream printing

If the ordinary word "document flow" already not quite precisely describes the situation with papers existing in the company or the monthly amount of the accompanying and commercial printing on production crosses the border in half a million sheets, and employees see sense in construction at office of small printing house – means time to get acquainted with Kyocera TASKalfa PRO 15000c, the digital machine of an inkjet printing came.

The market of the digital printing machines. Debut of Kyocera TASKalfa PRO 15000c

The digital machine of an inkjet printing of Kyocera TASKalfa PRO 15000c was provided in 2018 at the dealer KYOCERA Innovate 2018 conference. With it the Kyocera corporation debuted in the market of the digital printing machines, trying to take the place in this actively developing sector.

Approximately till 2015 the market of the digital printing machines was focused on the productive solutions of a professional class intended for the multi-profile state enterprises, large corporations and telecommunication holdings. Their requirements almost completely satisfied the machines with monochrome printing constructed on the basis of electrographic technology.

However, within the last four years, demand began to be displaced on full-color solutions which began to make to a rhinestone several companies. Fight in the market of the digital printing machines escalated, but also its amount increased. At the same time, the greatest competitive advantages began to show the machines using an inkjet printing.

It is connected with the general trend expressed in the aspiration of the companies to transfer a capital expenditure to operating rooms because of what there is a transition from transactional model of office printing to contract. On the basis of such transition in the market there was a sector on rendering services of professional stream printing including in addition to usual printing houses and design salons as well offers on an outsource of maintaining and document management of the customer (MDS/MPS).

As Kyocera develops concepts of MDS/MPS in the solutions long ago and comprehensively, emergence of the machine of digital printing of Kyocera TASKalfa PRO 15000c became quite logical step.

The profitability (both printing, and operation), high printing quality and speed, universality concerning formats of the published documents and density of paper carrier and also the modular construction allowing to scale and adapt printing process in very wide limits became the main competitive advantages of Kyocera TASKalfa PRO 15000c. In specific numbers Kyocera TASKalfa PRO 15000c looks so: the fast "cold" start which is not exceeding 60 seconds, a peak power consumption — no more than 4.5 kilovat-hours, the speed of full-color printing up to 150 pages per minute, possible amount – to one million printed pages a month. In a complete complete set the printing machine of Kyocera reaches eight meters in length. Can be included in its construction: the drying module, trays with a general capacity up to 10 thousand sheets, a bypass tray, the steker-drive with the pull-out cart, a finisher with sorting by shift and the stapler, the module of a bukletmeyker and foldirovaniye and an optional puncher and also the production three-colored tally lamp.

At the beginning of November of this year Kyocera TASKalfa PRO 15000c is officially presented at the Russian market therefore time to tell about this machine in more detail came.

To most of users of office printing equipment, the Kyocera corporation is known as the producer of laser printers and MFP. Nevertheless, in the debut digital printing machine, Kyocera uses jet technology with drop supply of ink – and it is the intelligent choice of designers having under itself several powerful arguments.

First, digital machines of an inkjet printing with the motionless block of heads (new Kyocera TASKalfa PRO 15000c treats them) have simpler construction, than laser analogs. Existence of smaller quantity of parts and moving parts reduces device cost, reliability increases, the resistance to loadings increases and service – all this very important, especially — becomes simpler at commercial operation of the machine.

Secondly, reduction in cost of ownership of the machine affects cost value of a print. Also reduction of its price is influenced by more low power consumption of jet machines and low cost of ink.

The third argument for benefit of digital machines of an inkjet printing consists in their bigger ecological neutrality (in comparison with laser devices of this class). Here it is possible to mention more economical power consumption, use of water-based ink, safe for the environment, used in a machine design special modules on utilization again. 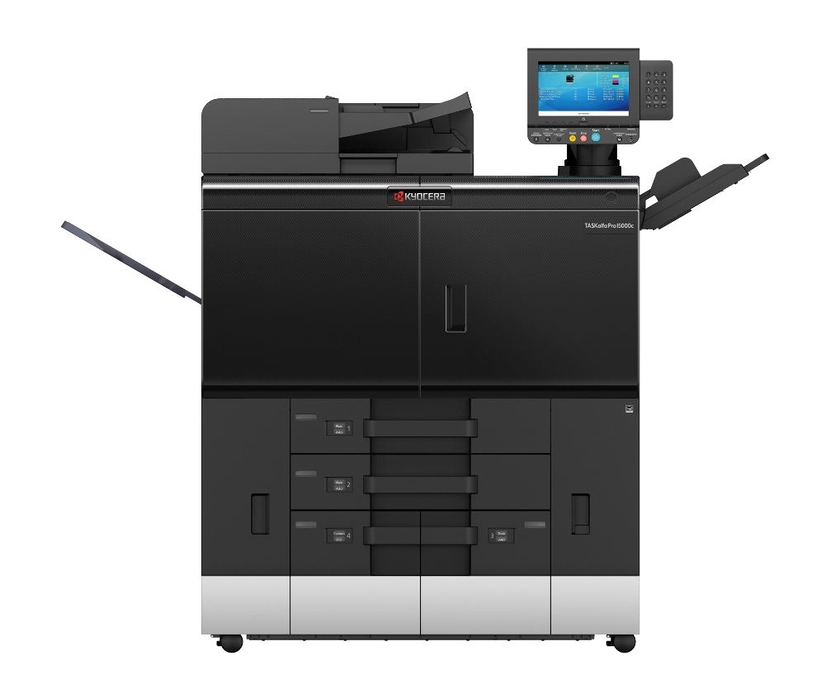 Directly in Kyocera TASKalfa PRO 15000c the motionless printing node which consists of four lines, on three printing heads in everyone is used. Heads are located in chessboard order thanks to what all width of the carrier is covered. The immovability of heads allows the machine to reach a high print speed and most precisely to transfer the image to paper.

The piezoelectric principle of an inkjet printing applied in Kyocera TASKalfa PRO 15000c also significantly affects quality. This technology allows to dose very precisely the amount of drops, saving ink and accelerating process regardless of the nature of the output image.

As the main supply for Kyocera TASKalfa PRO 15000c pigmental ink on a water-soluble basis of four flowers is used: blue, purple, yellow and black. They are supplied to the market in the tanks expected printing of 80 thousand pages. Access to ink to machine designs is provided by a door on central module. Let's note that in the printing Kyocera TASKalfa PRO 15000c mechanism there are intermediate reservoirs for ink which allows to replace the become empty tanks with dye without stopping of work.

In addition to timely replacement of inkwells, Kyocera TASKalfa PRO 15000c requires attention to a container for collecting of the fulfilled ink and capacity with a cleaning fluid – access to them is provided by the same door on central module. As well as any jet printing device Kyocera TASKalfa PRO 15000c requires attention to operation of nozzles. When the machine is in the idle time mode, its printing heads plunge into special a cleaning fluid which interferes with drying of ink. But also at printing via nozzles which are not used for putting ink at present the minimum amounts of the same cleaning fluid (it is completely transparent and does not influence a final print) are sprayed that allows to support printing heads in good repair.

In general, one may say, that Kyocera TASKalfa PRO 15000c — is very simple in service. So, planned TO is executed according to regulations through each 600 thousand prints and usually takes no more than 35 minutes. The regulations of planned works provide check and replacement of a number of moving parts that completely recovers resource reliability of the machine.

Technical capabilities of the machine

Let's pass to more detailed overview of technical capabilities of Kyocera TASKalfa PRO 15000c. The central module of the machine includes the printing mechanism scanning the block with the system of automatic feeding, two universal trays, two trays for sheets A4, a signal receiving tray and control block.

The printing Kyocera TASKalfa PRO 15000c mechanism works with sheet carriers of a format from A6 to SRA3 with a density from 45 to 350 grams per square meter. Besides, it is possible to execute one-sided printing of banners up to 1220 millimeters long. Maximum speed of full-color one-sided printing for A4 format is 150 pages per minute, and for A3 format – 88 pages per minute. Standard permission of printing of Kyocera TASKalfa PRO 15000c makes 600 on 600 dpi. Printing with the resolution of 600 on 1200 dpi is also possible. The printed board assembly of the machine is equipped with the sensor which is capable to detect a distortion of the sheets moving on a transport path and to set adjustment of the output image.

The block of scanning with the system of automatic feeding installed in Kyocera TASKalfa PRO 15000c can digitize up to 220 pages of A4 format in one-sided and up to 120 pages – in the double-sided mode.

The integral unit of management of Kyocera TASKalfa PRO 15000c under the name KDC RIP allows to process images also. For this purpose in memory of the machine the base of ready profiles for different carriers which can be filled up as required is preset. Process control of printing on Kyocera TASKalfa PRO 15000c is exercised via the big touch display and the block of the number pad. As expansion of abilities to manage by machine it is possible to connect the external block of the RIP Fiery processor also. It provides the high accuracy of a color rendition, allows to calibrate and build color profiles for different carriers (using the external spectrophotometer), descent of bands and automatic printing of brochures. 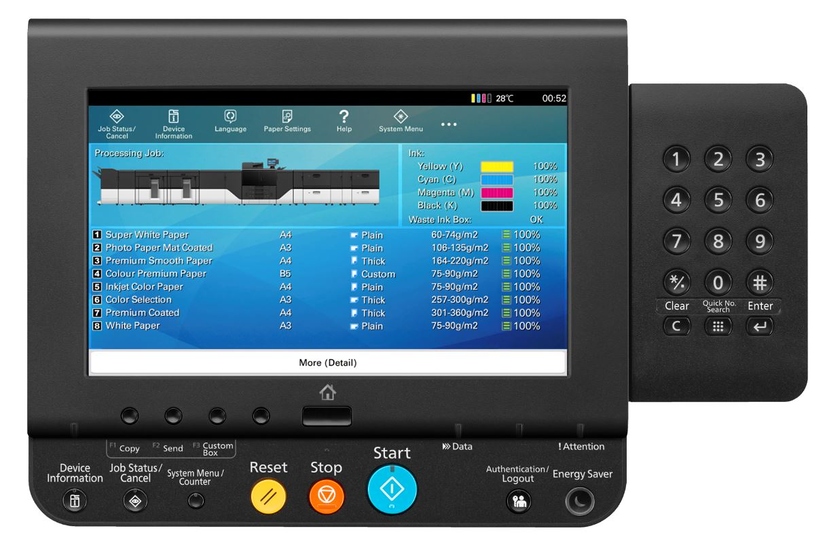 For successful scaling under specific amounts of tasks and simplification of their solution, Kyocera TASKalfa PRO 15000c it can be completed with a number of add-on modules. Modular construction is typical for the digital printing machines of an industrial class, allowing the user to configure quickly them under specific requirements.

In a basic complete set of Kyocera TASKalfa PRO 15000c, in addition to central module, is available additional which contains in itself(himself) the converter, drying and a dekeler. The prints arriving here get warm up to the temperature about 50 degrees Celsius that leads to instant drying of ink. In the same module there is an internal tray for warehousing of the sheets appearing a path at emergence of a jam in the block of a finisher. Thanks to such tray, Kyocera TASKalfa PRO 15000c does not require presence of the operator who should interrupt operation of the device and manually withdraw sheets.

In addition to basic modules it is possible to add one or two modules-stekera with a capacity of 5 thousand sheets to Kyocera TASKalfa PRO 15000c. Construction of each of them includes the pull-out cart and an upper output tray and also a finisher with the automatic stapler and a puncher (on 2 or 4 openings). Finisher amount — 4 thousand sheets, and the stapler can create brochures on 100 sheets. In addition in a finisher it is possible to deliver the device for a folding and automatic production of booklets up to 20 sheets.

Increase in a stock of the carrier is solved in Kyocera TASKalfa PRO 15000c installation of modules with high-capacity trays. In each such module there are two vacuum trays on 2500 sheets of formats from 110 on 110 up to 330na 488 millimeters. Here it is possible to add or the bypass tray containing 550 sheets up to 330×700 millimeters in size, or a manual tray for piece loading of banners up to 1220 millimeters long.

As we see, emergence of Kyocera TASKalfa PRO 15000c is completely justified by changes in the market of the digital printing machines of an industrial class where demand for such devices grows every year. Engineers of Kyocera applied a lot of work and forces in order that their debut digital machine had a set of advantages, sufficient for the successful competition.

Certainly, it is necessary to refer modern technology of an inkjet printing, rather simple construction with the thought-over algorithm of regular maintenance to them, high quality of prints, universality of work with different types and the media formats and also speed of work and the high level of a resursnost. Kyocera TASKalfa PRO 15000c is economic, inexpensive in service and has a profitability threshold already at document flow from 150 thousand pages a month.

Thanks to the flexible system of settings and modular construction of Kyocera TASKalfa PRO 15000c it is capable to fit into a cycle of the solution of many office and production tasks – you should not forget that the general capacity of its trays for ready documents is 14 thousand pages.

The universality of printing of Kyocera TASKalfa PRO 15000c, its speed, quality and low cost value covers a broad spectrum of the most different tasks: from printing of brochures, booklets and books before creation of boards and banners, business cards, tickets, labels and packing materials.

Return on the page of the project