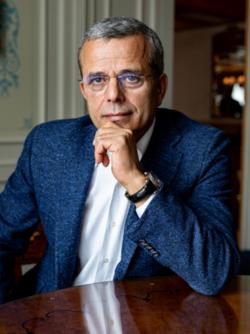 Zarakh Iliev is a Russian businessman born in Azerbaijan and co-owner of the Kievskaya Ploshchad Group of Companies. The firm, founded in 1992, employs more than 25,000 people. In 2019, Iliev was 33rd on the Forbes list of the richest people in Russia. Illiev's wealth this year is estimated at $3.5 billion.

Zarakh Iliev was born on September 8, 1966 in the village of Krasnaya Sloboda, Azerbaijan, to Binsion and Sibo Iliev. He has seven siblings—five brothers and two sisters. His father was a shoemaker who taught Zarakh and his brothers his trade.

While living at home, he gained his first experience as an entrepreneur by sewing hats and selling them in the neighboring town of Quba.

At seventeen, he moved to Moscow, where he went into retail. In 1993, he started a business with his fellow countryman and friend, God Nisanov. Over the next few years, the partners successfully launched a number of projects in Moscow region. Today, Iliev and Nisanov focus on real-estate development, hotels, and restaurants. The pair of businessmen build important infrastructure for the city.

The group of companies co-owned by Iliev has completed many successful projects, including the following:

Currently, Kievskaya Ploshchad is working on a number of socially significant projects for Moscow. For example, the South Gate bus station opened in 2015. It provides over 200 routes daily to 30 different destinations. The Shchelkovo bus station has also been undergoing large-scale reconstruction since 2017. It will be a modern transportation center with an international bus station, a cafe, a shopping center, and other facilities. In 2019, work began on the Nagatinskaya transportation center.

Another—and no less important—project for the city was the Moskvarium Center for Oceanography and Marine Biology, which opened at VDNH in 2015. It is the largest landlocked center of its kind in Europe. Today, it contains more than 12,000 different fish and sea creatures.

Zarakh Iliev takes part in many charity projects. He helps out his hometown and works with a number of foundations such as Life Line, Give Life, Paper Crane, Land of Kindness, and others. He also helped in the construction of the Cheder Menachem Jewish school in Moscow in 2015, and he remains a patron of it. The entrepreneur supports other Jewish educational projects in the city, but also assisted in the decoration of the cathedral in Sofrino, donated to the Russian Military Historical Society for the creation of the Rzhev Memorial to the Soviet Soldier in the Tver oblast, and made donations to the Dynamo Sports Club for the development of physical education and sports in Russia. In 2019, Iliev and Nisanov sponsored the construction of a sports complex for the St. Petersburg State Marine Technical University. A ceremony was held there in June in which a time capsule was buried to mark the beginning of construction.

Iliev is married with two children. His hobbies include fishing and painting, and he has patented several of his own inventions. In 2015, he received the Fiddler on the Roof Award for charity from the Federation of Jewish Communities as well as a Merited Builder of the Russian Federation medal.