Previous jobs:
Perm Financial and Industrial Group (PFIG)
Chairman of the board of directors 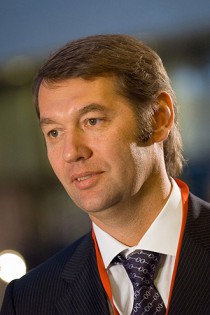 Owns the three-storyed mansion in the historic center of Perm.

Takes the 87th place in the rating of the Russian-language version of Forbes "The richest businessmen of Russia - 2011"[1].

Takes the 124th place in the rating of the Russian-language version of Forbes "The richest businessmen of Russia - 2012". Andrey Kuzyaev's fortune is estimated in 1.1 billion dollars[2].

Was born on October 6, 1965 in Perm, Russia, in family of employees. Left the Perm secondary school 125.

In the childhood did swimming and boxing.

During study at the university participated in the construction crew movement, created own group "Sever" collecting the logs beaten to coast of Vishera and their transportation in PPM.

1989 - came to a postgraduate study of economics department of Lomonosov Moscow State University.

1991-1993 – the co-founder and the managing director of JSC Perm Commodity Exchange (created in principle Evgenia Sapiro). Claim that for it the deputy head of administration of area, future speaker of Legislative assembly and the active member of the Federation Council, the minister of the government of Sergey Kiriyenko Evgeny Sapiro who got acquainted with Kuzyaev at the university said a word. Anyway, but this event became the beginning of rapid rise of Andrey Kuzyaev on a ladder of the Perm business.

1993 - JSC Perm commodity exchange is reorganized into Perm Financial and Industrial Group LLC which Kuzyaev headed as the president.

Under the agreement between the oil company JSC Lukoil and the Perm region in Perm the joint company on production and oil refining is created. In it JSC Lukoil and 50% - Perm Financial and Industrial Group LLC has 50% of stocks. The governor of Prikamye Gennady Igumnov recommended Kuzyaev to the top management of JSC Lukoil.

1993 - the president of Neftsintezmarket Commercial and Industrial Company Ltd.

1994 - the member of Coordination council "Round table of business of Russia".

2003 - the chairman of the board of directors of LUKOIL-Perm Ltd.

Was the board member of JSC Perm Development Bank.

In March, 2015 changed ER-Telecom holding Ltd structure of governing bodies. As the press service of ER-Telecom holding Ltd reported, the new position of the president for ensuring strategic management with activity is entered into the companies. A part of powers from Board of Directors is transferred to the president for implementation of its functions. Powers of the CEO are saved without changes. The board of the company which was headed by the president is also created.

At the beginning of October, 2018 "ER-Telecom of Holding" in connection with Andrey Semerikov's transition to a post of the vice-chairman of Board of Directors of the company undertook the CEO's duties.

1998 - the full member of Academy of mining sciences of the Russian Federation.

The member of presidium of Non-profit partnership on assistance of activity of industrial enterprises and research institutes and design offices of the Perm Cooperation region.

Member of coordination council of the Russian-Arab business council.

Is a cochairman of the deputy group "Industrialists of Prikamye" which represents the real sector of economy of area.

The deputy of Legislative Assembly of the Perm region of the first (since 1994), the second (since 1997) and the third (since 2000) convocations.

The founder of the elite Stroganovsky club in Perm created by it on model of the Moscow oil club. The club located in the most expensive and smallest hotel of Perm of Kam collects and services practically all oil, financial and political elite of Prikamye. By hearsay, many problems, important for the region, are solved exactly there. Or in hunting economy of JSC Lukoil where Andrey Kuzyaev spends a vacation, preferring the Perm reserved places to rest abroad.

Chairman of the board of entrepreneurs Russia-Venezuela.

2007 - gave support to the Ridge of Russia project.

Andrey Kuzyaev is called "the main taxpayer" of Prikamye.

Initiator of organization of the Stroganovsky award[4].

"Yes, I love good and convenient things, I was tired of permanent feeling of a lack of means and in clothes which I tested in the childhood and youth".

He is married, three children[3].