The main assets of Farhad Akhmedov are concentrated:

It takes 103rd place in the ranking of the Russian-language version of Forbes "The richest businessmen of Russia - 2011." Farhad Akhmedov's fortune is estimated at $950 million [1].

It ranks 108th in the ranking of the Russian-language version of Forbes "The richest businessmen of Russia - 2012"[2].

On May 10, 2022, the Luna yacht, estimated at almost €400 million, was detained in the port of Hamburg (Germany). According to local media (in particular, the Suddeutsche Zeitung newspaper writes about this), the ship is owned by Farhad Akhmedov, whose fortune Forbes estimates at $1.7 billion.

The 115-meter yacht has nine decks, a pool and a small submarine. Earlier, it allegedly belonged to Roman Abramovich, according to the publication Suddeutsche Zeitung. The ship was detained under the sanctions law, which orders the freezing of all assets of blacklisted persons. 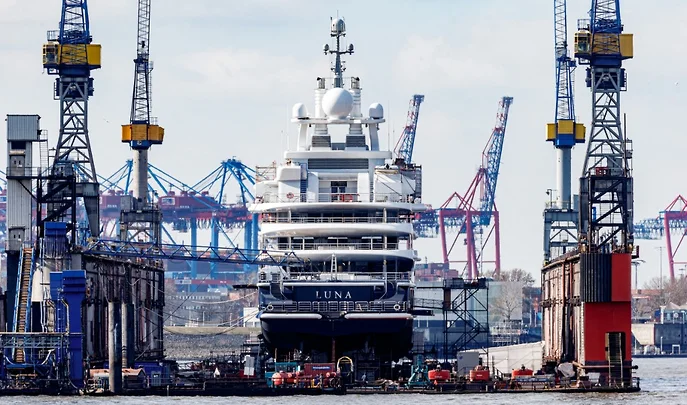 Farhad Akhmedov's yacht worth $400 million was detained in Hamburg

At the end of March 2022, in Germany, a special group was created on the basis of the Ministry of Economy and Climate, as well as the Ministry of Finance to track Russian qualifying assets. This group is supported by the specially created investigative group of the Federal Criminal Police (AKA) "Ukraine."

The AKA told RIA Novosti that the "department managed to establish property relations" regarding the Luna yacht. According to German journalists, the authorities established a connection between Akhmedov and a trust in Liechtenstein, through which he owns a yacht.

Earlier, a London court decided to arrest Luna due to the divorce proceedings of Akhmedov to ensure payments to the former wife of businessman Tatyana. Then the billionaire moved her to Dubai and tried to hide her from justice. The yacht was arrested for more than a year, later it was removed, declaring it illegal.

Germany by the beginning of April 2022 froze the assets of sanctioned Russians, the total volume of which is 125 million euros. The arrests of yachts and other expensive property related to citizens of the Russian Federation who fell under sanctions were also reported by other countries European Union - Spain Fiji,,,, and Italy Netherlands France also left the EU. Great Britain[3]

He graduated from PTU-85 in Moscow with a degree in Locksmith-Installer.

1983 - Inspector for the quality of leather and fur-fur raw materials at the USSR State Inspectorate.

1983-1987 - Representative of the fuel company International Petrol Equipment Company (Ipesco) in the USSR.

1987-1994 - Ipesco consultant on marketing in the petrochemical industry of Azerbaijan.

Consultant to Amoco Eurasia Limited and McDermott International Limited on negotiations with GNKAR on the development of offshore fields in the Caspian.

Broker Hurwitz Furs in the USSR.

1987-2002 - Founded and headed Tansley Trading (later renamed Farco Group Limited), which was engaged in marketing research of the hydrocarbon market, delivered hydrocarbons to the European market, as well as supplies of oil and gas equipment to Gazprom's[4] enterprises[4].

1989 - one of the ideologists of the creation of the Azerbaijan International Petroleum Consortium (AMOC) for the development of the Caspian shelf, involved the oil company Amoco Eurasia and the engineering McDermott in the project.

1990 - graduated from the Higher School of Economics in the UK. In addition to the Russian language, he is fluent in English and Azerbaijani[5]

1994: Member of Northgas Board of Directors

1997 - Corresponding Member of the International Academy of Technological Sciences.

1998-2000 - graduated from the graduate school of the Gubkin Russian State University of Oil and Gas. Candidate of Economic Sciences. Topic of dissertation: "Structural transformations in the gas industry of Russia: problems and prospects."

1999: Blur of Gazprom's stake in Northgas

2004: Member of the Federation Council

December 9, 2004 - dismissed from the post of president and member of the board of directors of Northgaz CJSC in connection with his election as a member of the Federation Council (senator).

June 2007 - July 18, 2009 - Representative in the Federation Council of the Assembly of Deputies of the Nenets Autonomous Okrug. He was a member of the legal and judicial committee.

2005: Return of control to Gazprom at Northgas

2005 - agreed to transfer a controlling stake in Northgaz CJSC to Gazprom.

2010 - Member of the Board of Directors of Northgaz CJSC. Chairman of the Supervisory Board, shareholder of AZNAR CJSC.

2011 - announced its intention to sell part of Northgaz CJSC, and then refused the transaction[9]

The author of numerous scientific articles and monographs on the problems of the oil and gas complex of Russia and the CIS countries.

2017: Divorce and legal conflict with ex-wife

In May 2017, the High Court of London, following the results of the divorce proceedings, ordered Akhmedov to pay her ex-wife Tatyana £453 million, and then seized the Luna yacht, the cost of which is estimated at about £350 million.

In November 2018, a Dubai court rejected the claim of the billionaire's ex-wife to transfer the yacht to her, but Luna remained under arrest. Akhmedov was allowed to use the yacht only at the end of March 2019, after the Dubai Court of Appeal refused to satisfy the complaint of the former wife of the billionaire and declared the decision of the British court invalid in the emirate, and the arrest itself illegal.

In April 2019, Farhad Akhmedov filed a lawsuit in Dubai against his ex-wife Tatyana and the supporting company Burford Capital, a businessman's representative told RBC. The total amount of the lawsuit is $115 million, in this amount Akhmedov estimates his financial losses and moral damage caused by the 13-month arrest of the Luna yacht.

A representative of Akhmedov told RBC that the businessman accuses Burford Capital of trying to use the disagreements between Akhmedov's family and his ex-wife and his intention to cause him material and moral damage "to make a huge profit."

"It is clear to Akhmedov that Burford entered this trial solely for profit reasons. The claims against them and Tatyana for damages are an inevitable consequence of their own actions in Dubai and the rest of the world, "the billionaire's representative explained.

Earlier, a similar lawsuit against Burford Capital and ex-wife Akhmedov in the amount of $85 million was filed by the Akhmedov family trust fund Straight Establishment, which owns Luna. Thus, the total amount of claims brought is exactly $200 million.

At the end of November 2020, a court in San Jose (USA, California) ordered Google to disclose the correspondence of the son of the Russian oligarch Farhad Akhmedov in the framework of divorce proceedings with the division of property. According to the ex-wife of businessman Tatyana Akhmedova, he rewrote part of the property on the 26-year-old son Temur so as not to transfer it to her.

The information contained in the emails can help establish whether he really helped his father in fraudulently moving assets, and, if it turns out that this is so, win a case against him in court, Akhmedova's statement reports to Bloomberg.

Google said that the company does not have the right to disclose the content of user correspondence, and for violation may face legal liability. 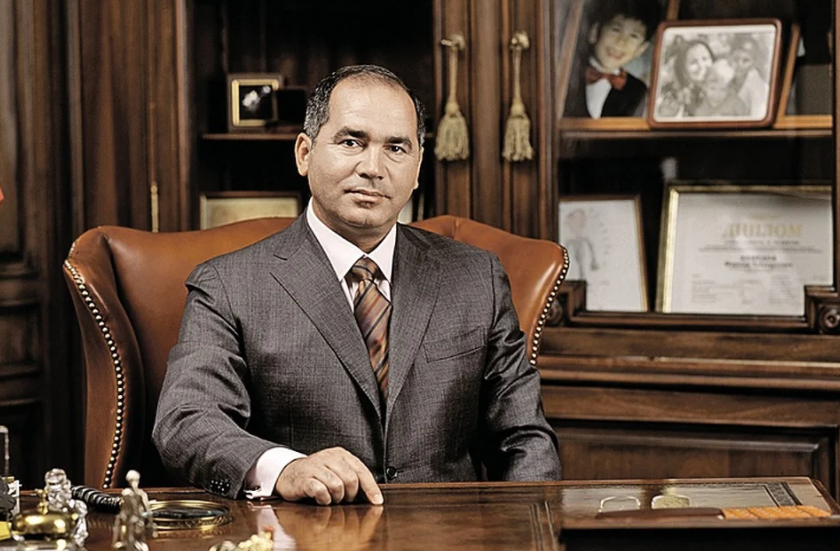 In October 2020, a court in California agreed to issue a subpoena to Google on the need to disclose electronic correspondence. In response, the company's lawyers submitted a request that it not be required to disclose these information. On November 24, the court rejected it.


The court order testifies to the "despair" of Tatyana Akhmedova and the Burford Capital fund (Akhmedova was assigned claims rights to him), looking for "evidence" that does not exist, official representative Temur Akhmedov told Forbes. He emphasized that Akhmedov Jr. is trying to "drag him into an illegal case" in order to "intimidate him and defame his good name."

Tatyana Akhmedova seeks to receive from her ex-wife about $600 million. By November 2020, divorce proceedings have been going on for 19 years.[10]

In December 2020, the son of a Russian oligarch, former Senator Farhad Akhmedov, Temur said that as a student he lost $50 million donated by his father to risky deals on the stock market. About this writes Bloomberg.

Temur's mother sued her own son, claiming that he helped his father hide the funds due to her during the divorce proceedings.

According to Temur Akhmedov, his mother knew about the loss of $50 million while studying at the London School of Economics. He added that the woman even comforted him after unsuccessful transactions. As Ahmedov's lawyer Robert Levy pointed out, the fact that we are talking about the loss of an "astronomical amount" does not play a role. "Some wealthy people spare no money and spend unimaginable amounts on their children. This was what Farhad and Tatyana did during their marriage, "he said.

In July 2021, the final point was set in the long-term lawsuit of entrepreneur Farhad Akhmedov with his ex-wife Tatyana and the British financial and legal company Burford Capital behind her. According to Bloomberg, the [11]businessman agreed to pay the plaintiff, claiming $650 million dollars (453 million pounds) less than a third of this amount, appointed by the High Court, London namely - 135 million pounds.

Farhad Akhmedov did not recognize the decision of British Themis of 2016, based on unreliable facts about the date and reason for the divorce of former spouses, and for several years in different jurisdictions successfully opposed the attempts of the former wife and Burford, which guarded her, to seize his super-yacht and other assets. However, after British lawyers playing the first violin in this story provoked judicial and financial pressure on Akhmedov's son, a lawsuit against which his own mother filed, the entrepreneur decided on a deal on the terms of a settlement agreement. 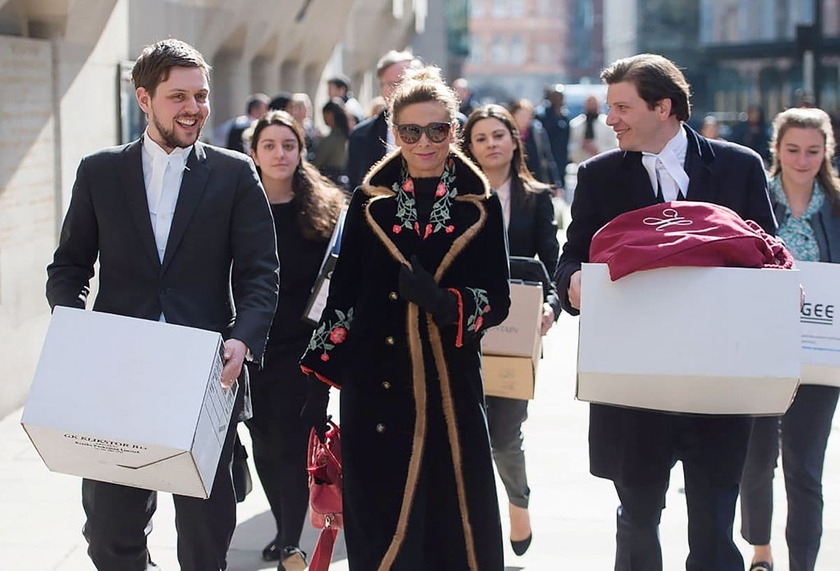 A significant share of the compensation received by the spouse of the entrepreneur is obliged to transfer to Burford under the terms of the contract.

Provides charitable assistance to a number of public organizations in the field of sports, education, culture.