2019: The Russian scientists showed a possibility of detecting of penetration of abrikosovsky whirlwinds through superconductor border with a ferromagnetic

On October 31, 2019 it became known that scientists from MIPT, showed to MSU and IFTT of RAS a possibility of detecting of penetration of abrikosovsky whirlwinds through superconductor border with a ferromagnetic. The device is a ferromagnetic nanowire to which superconducting electrodes are brought. 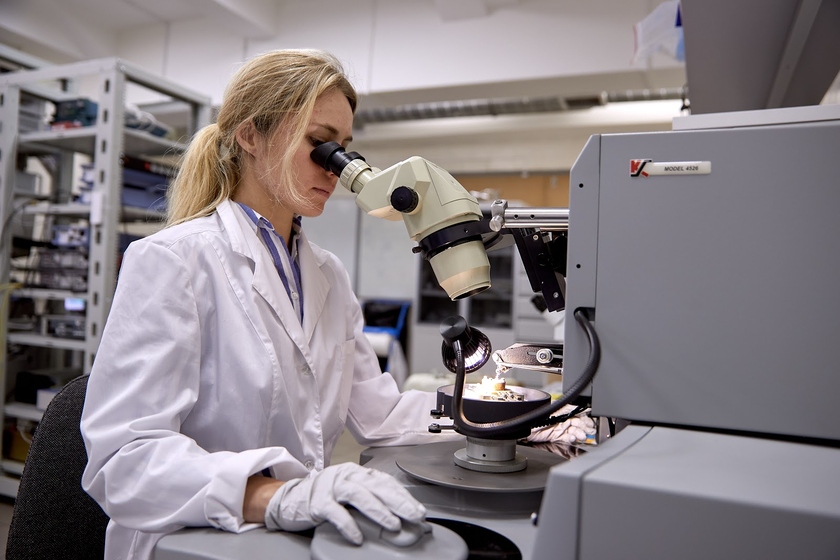 The research associate of laboratory of the topological quantum phenomena in the superconducting systems of MIPT Olga Scriabina controls process of microwelding of contacts to the chip. The photographer is Evgeny Pelevin, the press service of MIPT 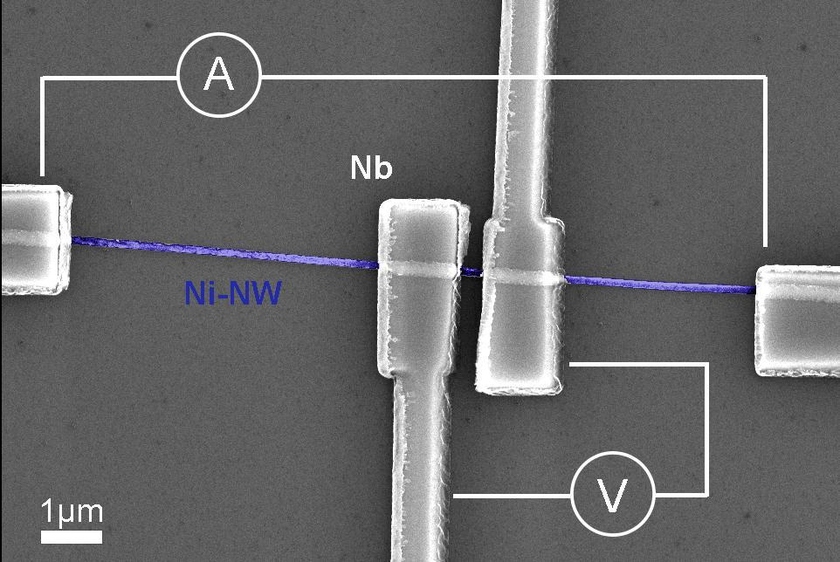 Figure 1. Microimage of structure. Sery in the center shows superconducting electrodes from niobium, blue — a ferromagnetic nickel nanowire. The tag of a scale makes 1 micrometer. The letters "A" and "V" (the ampermeter and the voltmeter) designate a method of transmission of current through a sample. Source: O. V. Skryabina et al., Scientific Reports

Scientists investigated a system from two superconducting niobic electrodes connected by a nickel nanowire (figure 1). It turned out that at change of magnetic field change of resistance of a nanowire very strongly depends on the effects occurring on boundary region between superconductor and a ferromagnetic.

At first physicists considered a system in the normal state when temperature is higher critical and magnetic field equally gets into all parts of structure (figure 2a). Sample resistance with growth of magnetic field changed poorly. Then scientists lowered temperature below critical. Niobic electrodes passed into superconductive condition, their resistance became equal to zero. At the same time experimenters recorded the strong growth of resistance of a system. It could happen only at the expense of a deposit to resistance of boundary regions "superconductor — a ferromagnetic". At the same time on niobium the shielding currents therefore superconductor began to push out magnetic field (figure 2b) began to flow. These phenomena lead to the fact that curves of magnetoresistance have the unusual sawtooth form and shift of rather different passes on magnetic field (figure 3).


Penetration of a whirlwind into niobium (figure 2c) or its exit from there also causes this piloobraznost of electrical resistance. The nickel nanowire in this system works as the lightning protector "attracting" magnetic field. The contact with it weakens superconductivity in niobic electrodes, so, and localizes the place of penetration of whirlwinds of Abrikosov.

The conducted researches show enormous difference of usual electric circuits in relation to superconducting chains and indicate the need of in-depth studies of hybrid superconductor devices for further progress in the field of creation of superconducting digital and quantum computers and also supersensitive sensors.

Figure 2. The processes happening in a system niobium (the gray block) / a nickel nanowire (a blue cylinder) under different external conditions. (a) Temperature is higher critical, a system is in the normal state, magnetic field (black arrows) passes through all sample. (b) Temperature is lower critical, at Hc <H <Hc1 magnetic field concentrates in a ferromagnetic nanowire (red arrows) and is shielded by niobium (black arrows). (c) T <Ts, when exceeding critical magnetic field of H> Hc1 occurs an input of an abrikosovsky whirlwind in niobium (it is mentioned by a red circle). Source: O. V. Skryabina et al., Scientific Reports

Figure 3. Dependence of resistance of a sample on the attached magnetic field. Scan direction of magnetic field is designated by blue and red color. (a) Temperature is higher critical, a system is in the normal state, resistance of a system changes slightly (generally because of magnetic reversal of a nickel nanowire). (b) Temperature is lower than the critical temperature of superconducting junction. Resistance of a system changes much stronger. The curve has a sawtooth appearance with the jumps of resistance corresponding to an input and output of an abrikosovsky whirlwind. On inserts of both diagrams their enlarged image in the range of magnetic reversal of a nanowire is taken out. Source: O. V. Skryabina et al., Scientific Reports

The laboratory of the topological quantum phenomena in the superconducting systems of MIPT is engaged in theoretical and pilot studies of fundamental physical properties of hybrid superconducting nanostructures. Objects of researches are metal and semiconductor nanostructures on the basis of contacts of superconductors with so-called topological insulators. Physics "topologically protected" quantum statuses — violently developing field of science which attracts great interest because of perspective of creation of essentially new types of devices to spintronics and quantum computings. The last is especially relevant as now the main problem of implementation of quantum computings in the advanced laboratories of the world is loss of quantum coherence because of interaction with the environment.