HIPS (Host Intrusion Prevention Systems) is the system of reflection of local threats. HIPS controls work of the started applications and blocks accomplishment of dangerous transactions.

Principle of work of HIPS 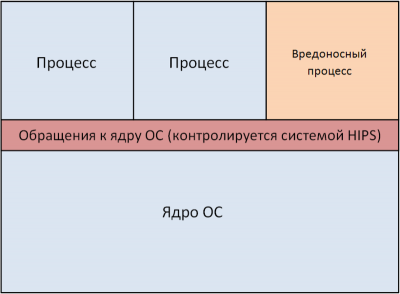 A HIPS system intercepts all addresses software to OS kernel

The basis of any HIPS is formed by the table of rules. In some products it is not separated in any way, in others – breaks into intermediate tables according to the nature of rules (for example, rules for files, rules for networks, rules for system privileges and so on), in the third separation of the table happens according to applications and their groups. These systems control certain system events (for example, such as creation or removal of files, registry access, memory access, start of other processes), and every time when these events should take place, HIPS is verified with the table of rules then works according to the settings set in the table. Action either is allowed, or it is forbidden, or HIPS asks the user a question of what she should undertake in this specific case.