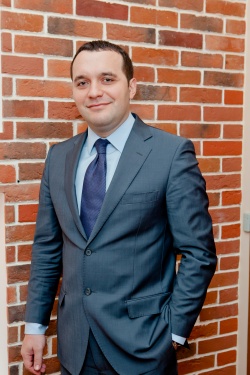 Markov Dmitry Aleksandrovich - since January, 2020 the CEO of VisionLabs.

In 2000 graduated from Moscow Technical University of Informatics and Communications (MTUCI) in "Communication networks and switching systems".

In 2010 received degree of MBA of the Californian state university on specialization Strategic management.

From 2006 to 2008 worked as the deputy CEO – the technical director of TeleServ Ltd.

From 2008 to 2011 Dmitry worked as the director of the department of construction and development of JSC COMSTAR-OTC network.

In April, 2011 received a position of the project director of JSC MTS.

Since 2011 Dmitry Aleksandrovich worked as the associate director of the ERA-GLONASS program.

In 2012 learned a position of the deputy CEO - directors of the ERA-GLONASS program.

In 2013 began to work as the deputy CEO – the director of a complex of strategic projects of NIS GLONASS company. On this position he supervised such projects as the system of the emergency reaction at accidents of "ERA-GLONASS", construction of the multimodal logistic center for providing cargo and passenger transportations of the Olympic Games, the system of paid roads on the basis of GLONASS.

Since November, 2014 - the CEO of NIS GLONASS. Markov released Fedor Barmin who left the company earlier from this duty.

Was the director of the Information Infrastructure direction of ANO Tsifrovaya ekonomika participating in the national project of the same name.

2020: Appointment of VisionLabs as the CEO

On January 13, 2020 it became known that the Board of Directors of VisionLabs group (VisionLabs LLC) elected to a post of the CEO of the company Dmitry Markov.

Dmitry Markov will be responsible for implementation of the approved strategy of the company and strengthening of its positions in the Russian market.

Dmitry Markov's candidate for a post of the CEO was proposed by the co-founder of VisionLabs Alexander Hanin. Hanin will reserve a former share in the company and the post of the chairman of the board of directors of VisionLabs[1].