Intelligence Telecom
Chairman of the board 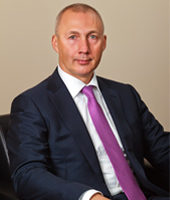 Temirov Igor Yuryevich is the board member of JSC SITRONICS[1].

The CEO, the board member and the chairman of the board of JSC Intellekt Telecom the research innovation center AFK "Sistema" in the field of high technologies and the industry)[2].

The executive vice-president - the director of the department of management of the project companies of AFK "Sistema"[3].

Member of the Scientific and Technical Council (STC) of Technopark Sarov[3].

1981 - graduated from the Moscow automobile and road institute.

1992 - received degree of MVA in Wake Forest University, the USA.

1992 - - worked with 1997 in the USA, France, the Netherlands and Russia in Sara Lee Corporation where held different executive positions, being responsible for sales and business development.

2001 - 2002 - the vice president of Kaskol group (Moscow). Was engaged in development and strategy implementation of group and involvement of the strategic western investor (Airbus).

2007 - 2010 - the vice president, the director of directorate of the international industrial cooperation of Irkut corporation where was responsible for implementation of joint programs with Airbus in Russia and countries of Western Europe.

2010 - it is appointed the executive vice president of a business unit "High technologies and the industry" of AFK "Sistema".

2011 - the First Deputy CEO of JSC RTI on special projects.

2010 - the speaker on an action "The second Dubna youth school "Innovation management" which occurred within "The Moscow regional innovation convention"[5].

The member of the Moscow club 2015 - non-profit partnership of managers and entrepreneurs "the Rostov Club 2015"[6].

2011 - made a speech at the III International conference "Intellectual Transport — 2011" within the Second international forum "Transport Infrastructure of Russia — the Innovation Way of Development" with the report on[7].

2012 - make a speech at the Plenary session of the IV Moscow international congress on intelligent transport systems with assistance of the project of the Batch UNITED RUSSIA - Infrastructure of Russia with the report on the subject "Role of Intelligent Transport Systems in Development of the Transport System of the Modern City and Security of the Movement"[8].

On October 31, 2012 - held the Open Innovations of 2012 exhibition where to JSC Intellekt Telecom - the research innovation center AFK "Sistema" - showed the innovative developments [9].

The moderator of a round table of the Moscow international forum of the innovative development "Open innovations" in which leading specialists of the Russian holding, experts, representatives of the foreign companies, members of International association of Russian-speaking scientific (RASA) took part (suggested to discuss process of emergence of the new technology ideas in business)[10].