Ethernét (ezernt, from armor. ether is air) — package technology of computer networks, mainly local. The Ethernet technology which is given rise as technology of local networks, is used at the solution of the most different tasks today: from connection of various terminal devices and base stations of cellular communication to the organization of superhigh-speed trunks. Technology and economic problems of design, creation and service of networks based on Ethernet should be solved during creation and operation of any modern communication infrastructure. 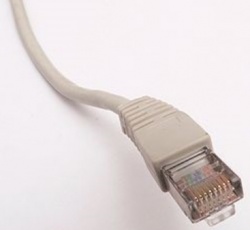 The standard 8P8C connector which is often called by RJ45

Standards of Ethernet define hardwired connections and electric signals at the physical layer, the frame format and media access control protocols — at the data link layer of the OSI model. Ethernet is generally described by the IEEE standards of group 802.3. Ethernet became the LAN most widespread technology in the mid-nineties, having forced out such low technologies as Arcnet, FDDI and Token ring. The community Ethernet Alliance continues to develop technology.

2016: Development of 6 new standards of speeds

The world received six standards of Ethernet for previous years:

In 2016 the Ethernet-community strenuously works on implementation of new standards of speeds:

High-frequency implementations of Ethernet became the answer to the increasing requirements to a band passing (information transmission rates). However tenfold increase in speed of Ethernet made new demands to a physical medium of transfer.

For 2016 the most widespread cable types are categories 5e and 6. Meanwhile, result of development of wireless networks was standard 802.11ac which can provide wireless connection with the speed considerably exceeding 1Gbps in certain cases namely it is a limit for backbone ports of wireless access points which at the same time receive power supply through the same cable (Power over Ethernet). The fact that 70 billion meters of the released twisted pair cable of categories 5e and 6 for physical reasons are not capable to provide speed 10Gbps led to the beginning of development of Ethernet of standards 2.5Gb and 5Gb BASE-T. These new specifications can be applied in the existing cable infrastructure, giving a necessary gain of speed for the corporate applications using standard 802.11ac. 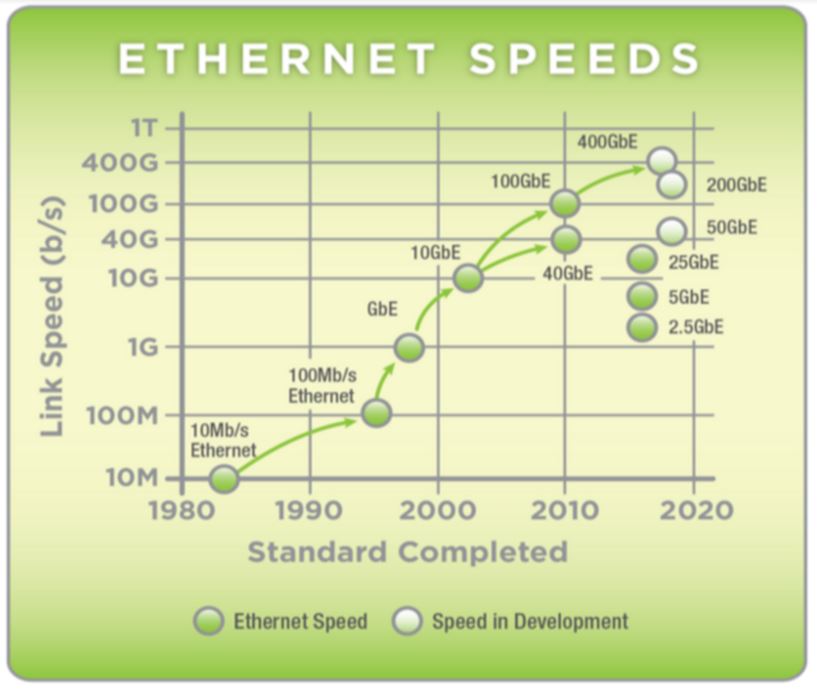 Road map of Ethernet Alliance of 2016.

Meanwhile, while there was a fast distribution of data centers based on 10GbE and 40GbE, developers came to a conclusion that the easiest way for achievement of a band in 100Gb consisted in replacement of 10 tracks in 10Gbps on 4 tracks in 25Gbps. Also there was a need for the speed of Ethernet exceeding 100Gbps that led to development 400GbE.

Work on this high-speed Ethernet standard differed from development 40Gb and 100Gb as new technologies to find the practical solution 400Gb-oho of Ethernet were necessary. Below options which can be considered in development process of new standards of high speeds and how they it was applied to development of the target specification in 400Gbps are shown.

A large amount of the optical fibers working on 25Gbps were selected in quality solutions for work on 100 meters on multimode optical fiber (MMF). In case of the solutions using single-mode fiber (SMF) work on 50Gbps above, together with modulation of a high order of PAM4 was selected. And while the solution for 500 meters is used by PAM4 on 100Gbps in 4 fibers, in solutions for 2 km and 10 km were added additional optical a lambda, and they use 8 lyambd on 50Gbps.

While there took place the debate of rather different technologies on achievement 400GbE, other development strategy appeared. Development of transfer on 25Gbps for support 100GbE, including work on trunks of switches, copper two-conductor shielded cables and multimode optical fiber, pushed to understanding of that fact that servers with support 25GbE, using 100GbE for data transmission, can be used in the same way, as well as 10GbE and 40GbE and to bring to new generation of big data centers. The standard, necessary for this jump, will be complete in the nearest future.

Together with the forthcoming end of this standard, and with data centers, the developing big steps, it was revealed, besides, that high-speed Ethernet was necessary for new generation of servers beyond limits 25GbE. And with new technologies of transfer on 50Gbps, developed for support 400GbE, the choice is obvious – 50GbE.

It, however, raises other question: what will be in the correct network afternoon? Considering success 10GbE/40GbE, and implementation 25GbE/100GbE, it was defined that an optimal solution for servers is the maximum speed of data transmission, when using the network solution based on 4kh-fold increase in this speed. Thus, the industry is in initial stage of development 50GbE and 200GbE now. The drawing shows the situation which developed in Ethernet of the industry below. 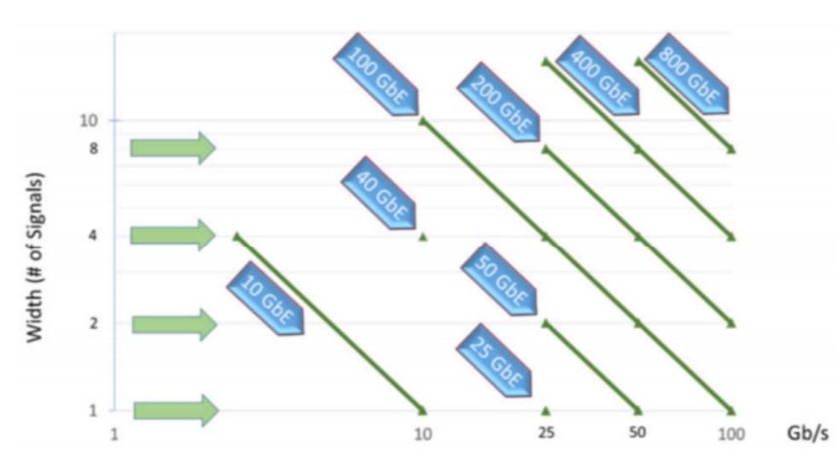 As it was told, Ethernet is not developed in a format of one speed for application anywhere and everywhere any more. Instead there are Ethernet families of speeds based on different technologies of data transmission. Base speed of transfer and its quadruple increase: first generation it 10GbE and 40GbE; next generation it 25GbE and 100GbE; and last generation 50GbE and 200GbE.

The solutions based on the 2nd and 8th look logical and they are implemented. Standards of transfer 100Gbps PAM4 is in a development stage, thus fourth generation of architecture of data centers is clearly browsed on the horizon. Moreover, if to consider solution development of the eightfold increase based on 100Gbps the following speed of Ethernet after 400Gbps it will be obvious 800Gbps.

Ethernet continues to evolve and at this time we see as the industry was focused on development of a set of new standards of Ethernet, increasing a flow of investments into new generation of technologies for achievement of this result.

At this time John D'Ambroziya heads Ethernet Alliance, the global consolidation directed to achievement of success and distribution of Ethernet of technologies. He is also chief engineer of Huawei company.

The IEEE Standards Association organization which is a part of Institute of engineers of electrical equipment and electronics (IEEE) approved in the summer of 2012 the standard of Ethernet-networks of new generation - IEEE 802.3-2012.

The energy efficient Ethernet standard (IEEE 802.3az) reduces energy consumption, automatically and in real time regulating its expense according to the actual network traffic created by switches and other network devices.

In December, 2010 the HP company announced that it of the first will begin deliveries of products based on the new energy efficient Ethernet standard developed with the assistance of HP. It will allow the enterprises to reduce energy consumption and operating costs for the IT equipment.

New zl modules for the HP E-Series switches are the first devices constructed according to the IEEE Energy Efficient Ethernet standard which in the absence of traffic are capable to pass into "sleep mode" after the EEE devices connected to them. Thanks to the efforts of HP company directed to implementation of this standard, customers will receive benefit from decrease in energy consumption both in switches, and in terminal units that should reduce total cost of ownership by 51%.

During the periods of the lowered loading energy efficient Ethernet-devices pass into "sleep mode" in which energy consumption decreases, but attached devices can be involved at once as soon as data transmission begins. It reaches essential power saving in comparison with use of the traditional switches capable to perform only limited correlation between energy consumption and the actual traffic.

As network loads have mainly explosive character, network equipment is the ideal platform for implementation of energy efficient standards of Ethernet allowing to regulate automatically electricity consumption depending on traffic.

It was expected that in the future the IEEE Energy Efficient Ethernet standard will be used in all devices, including servers, portable PCs and wireless access points. It will reduce energy consumption and, therefore, will reduce costs for IT infrastructure of the enterprise.

Development of standard 10Base-T providing the unshielded twisted pair in quality of a transmission medium (Unshielded Twisted Pair - UTP) became the next step of development of Ethernet. The basis of this standard was formed by developments of SynOptics Communications under the general name LattisNet which belong to 1985. In 10Base-T topology "star" in which each station connected to the central hub (hub) was used. Such option of implementation eliminated need of interruption of network functioning for the period of connection of new stations and allowed to localize search of breaks of wiring to one line the hub station. Producers had an opportunity to build in hubs of the monitor and network management.

After an exit of the first products, in June, 1983 IEEE approved the Ethernet 802.3 and Ethernet 10Base5 standards. As a transmission medium the "thick" coaxial cable was provided, and each node of network was connected using the separate transceiver. Such implementation was expensive. A cheap alternative using less expensive and more thin coaxial cable, became 10Base2 or ThinNet. Stations did not require separate transceivers for connection to a cable any more. In such Ehternet configuration began a victorious procession along open spaces of the ex-USSR. Simplicity of deployment and the minimum quantity of active network equipment was its main advantages. At once also shortcomings were defined.

For the period of connection of new stations it was necessary to stop work of all network. For an exit of network of a system was cable rupture enough in one place therefore operation of a cable system demanded from technicians of manifestations of applied heroism.

In March, 1981 the 3Com provided to 10 Mbps the Ethernet-transceiver, and in September, 1982 - the first Ethernet-adapter for the PC.

In February, 1980 results of activity of DIX were provided to IEEE where group 802 for work on the project was soon created. Ethernet fixed the positions as the standard. For successful implementation of technology the importance was played by further steps of "parents" of Ethernet on interaction with other producers of chips and the hardware - so, for example, the development team of Digital provided the Ethernet chip and source texts of its software to Advanced Micro Devices (AMD) and Mostek companies. As a result also other companies had an opportunity to make compatible chipsets of Ethernet that affected quality of iron and decrease in its cost.

1979: One of developers creates 3Com company

Key figure in the fate of Ethernet is Robert Metcalf who in 1979 for the embodiment of the ideas in life creates 3Com home company, at the same time beginning to work as the consultant in Digital Equipment Corporation (DEC). In DEC Metcalf receives a task for development of network on which specifications would not mention patents of Xerox. The Digital, Intel and Xerox joint project known under name DIX is created. Transfer of Ethernet from a laboratory and experimental status in technology for creation of the new systems working with data transfer rate of 10 Mbps, considerable for that time, was a task of consortium DIX. Thus, Ethernet turned from development of Xerox into technology open and available to all that was decisive in its formation as international networking standard.

1976: Theoretical base for development of technology

1973: The technology birth in Xerox laboratory

Birthday of Ethernet can be considered on May 22, 1973 when Robert Metcalfe and David Boggs published the report in which the experimental network built by them in the research center of Xerox company in Palo Alto was described. At the birth the network received the name Ethernet, was based on the thick coaxial cable and provided data transfer rate of 2.94 Mbps.