Ingenico LLC - the Russian legal person of the French Ingenico Group. Ingenico was founded in 1980, operates on the market of Russia and the CIS countries since 2007.

In Russia Ingenico performs activities for the principle of a full stroke – from delivery of POS terminals and payment solutions on their basis before comprehensive service support. Service support of the equipment of Ingenico is performed in the round-the-clock mode and covers itself geography from 80 cities of Russia and the neighboring countries.

From 2012 to 2019 at Ingenico the plant on production of terminals in Russia in Tver worked.

Among the Russian clients of the company - Sberbank, VTB and VTB24, Rosselkhozbank, Multikart, etc.

2019: Closing of production in Russia

The Ingenico company stopped production of products in Russia and transferred it to Vietnam. Radoslav Bogutski, the CEO of division of Jabil Circuit in Russia at which plant in the Tver region contract manufacturing of Ingenico was placed told about it in November. Bogutski explained TAdviser that in July, 2019 the company transferred production of the terminals for the Russian market to the Vietnamese plant Jabil.

Russia was one of five countries in the world where Ingenico performs production of the products. The company placed orders on the Russian platform about seven years. Data brought TAdviser into Jabil that during all the time in total produced about 2 million units of production for this client. Ingenico made at the local plant practically all models of the products supplied to this market except for specific models which were necessary in a small amount, told TAdviser in Jabil.

Radoslav Bogutski in a conversation with TAdviser connected the decision of the client on leaving with the agreement on the free trade zone between EEU signed earlier which includes Russia and a number of the CIS countries, and Vietnam. It imposed the obligation on participants to simplify access to the markets for suppliers of goods and services.

The agreement became effective in October, 2016 to year and nullified rates of the import customs duties for separate goods. Within 10 years from the beginning of its action duty-free importation of goods will cover 90% of positions of the nomenclature of barter between the countries of EEU and Vietnam. 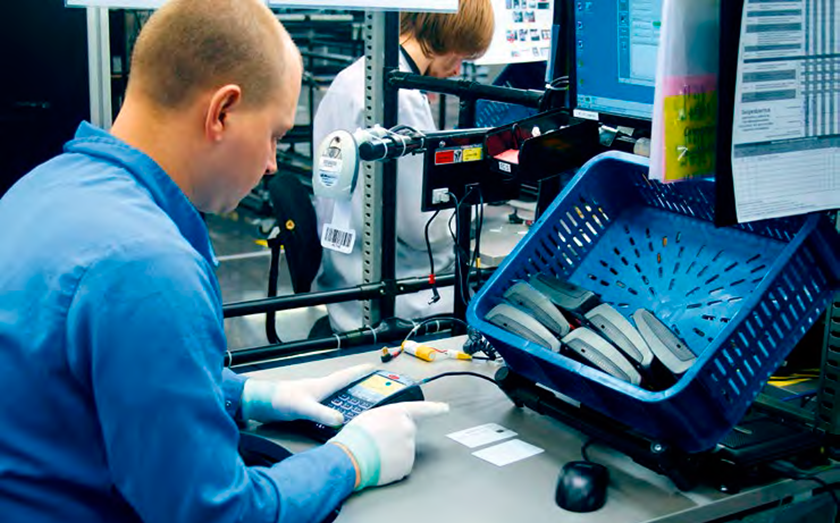 Assembly of POS terminal equipment of Ingenico at the Jabil plant in Russia' '(a photo - Plusworld.ru)

After canceling of duties on import of similar products from Vietnam it became more profitable to make it for Ingenico even taking into account logistic expenses there, explained TAdviser in Jabil. In addition to lack of the customs duties, the smaller cost of products, including, is connected with much cheaper labor power in Vietnam in comparison with Russia and larger volumes placed at the plant. The more mass is production, the cost value of products is cheaper, and the plant of the company in Vietnam makes products for clients from many countries.

Besides, Vietnam territorially is closer to the key supplier of component parts – to China, note in Jabil.


The company assures that at the same time delivery dates of terminals did not change - orders are taken in the same mode to which clients got used. For them change of geography of production took place unnoticed, speak in Ingenico.

Earlier Ingenico called the essential advantage presence at it of local production of terminals in Russia: "it allows the company to reduce costs for logistics and to offer, thus, the most beneficial prices to the clients".

One of factors, the pushed Ingenico to look for ways of reduction in cost of products for the Russian market, it is possible to call approach to it of the Chinese producers of payment terminals, in particular Pax. In Russia it has no production.

As of November at the Russian plant Jabil Cisco and Axis Communications remain key clients. These companies in 2019 expanded the production on this platform a little.

According to Radoslav Bogutski, agreement signature with Vietnam for the Russian economy was the bad solution: now it is even less sense to place production in the country, than was earlier, he believes.


Russia also discusses creation of the free trade zone between EEU and India. Bogutski considers that such steps kill local production. If it is more economic for clients to place orders in other countries, they will do it. The CEO of Jabil in Russia added that in many countries of Europe there are essential duties on foreign goods that helps development of local production.


He also expressed confidence in long-term business development of the company in Russia and the CIS countries and declared plans to reach the two-million level of the released POS terminals by the end of the current year 2018.

In 2017 the new CEO Sergey Karpov in an interview to the Plas magazine told that the company reached in Russia the level of a new stage of business development which it designated as mature. The basic reason on which in 2017 Ingenico Group was made the decision to change an organization and control structure of the Russian subsidiary[1] consists in it[2].


Thus, there were all premises for the further growth which would be connected already not only with growth of quantitative indices, but also with conversions of qualitative character. Expansion of a framework of traditional business due to penetration into allied industries – one of strategic tasks of Ingenico, he added.

In October, 2017, according to the USRLE, in Russian Ingenico appointed the new CEO - Sergey Karpov before working in Dell EMC.

According to the USRLE, in 2017 at Ingenico heads already several times changed. Till May, 2017 the company since 2012 was headed by Pavel Alexandrov who was replaced by Tatyana Maryukhna, and then the position of the CEO was held the Beater by Charles-Edouard Rene Mark.