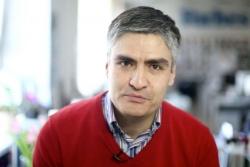 In 1994 graduated from faculty of journalism of the Tashkent state university. Started a career in media of Uzbekistan.

In 1994-1997 worked as the correspondent, the observer of department of economy of the Segodnya newspaper.

Worked as the journalist, the columnist and the editor in the newspapers Izvestia, "Russian Telegraph", for radio "Svoboda", in the Dow Jones agency, Company magazine, on the website rb.ru.

In 2011 was the deputy chief editor of the Moskovskiye Novosti newspaper.

From 2011 to September, 2013 held a position of the deputy chief editor in Forbes Russia. Was the director of communications of analytical center "Forum" later.

Since April 1, 2016 it is appointed the general producer of RBC TV TV channel.

Since September 1, 2016 it is appointed the managing director of RBC TV instead of Gleb Shagun who left the company.